Cordillera Blanca is the world's highest and most glaciated tropical mountain range. It is a paradise for high altitude climbers as it offers a wide range of peaks and routes in all difficulties. Topped by 6768 meter high Huascaran there are 25 6000ers and more than 50 peaks above 5500m within this range, among them is beautiful Alpamayo and the "Paramount Pictures peak" Artesonraju. Climbing season runs from the middle of May until early September, give or take a couple weeks on either end of the spectrum. It provides long periods of dry and sunny weather only interrupted by one or two less stable days, which however may force you to wait in your tent before the summit bid.

Formed by the movement of the South American continental plate against the Nazca plate, this range is primarily one long mountain chain less then 100 km off the Pacific coast. It is intersected by many formerly glaciated U-shaped valleys, which bring nearly all base camps within a day's reach from Huaraz. All mountains are usually climbed by small teams in alpine style using one or two high camps. Besides burros (donkeys) which may help you carrying your backpack to the base camp (mostly around 4000 - 4500m) there is no need of expedition infrastructure with porters, multiple camps or fixed ropes. You will however, undoubtedly find large teams with numerous porters and guides, and one could argue that this method of climbing is more prominent here in recent years. These huge groups (sometimes over 30 people!) can literally ruin your plans if you are a small independent party, so be aware especially on the more popular routes.

Except for a 65 Sol (~$20) entrance fee to enter the national park which is good for 21 days, there is no red tape and you don't need any permits for climbing one of these beautiful peaks. This, along with the stable weather makes the Cordillera Blanca arguably the best choice worldwide for high altitude mountaineering in the 6-7000m range! One very important thing to keep in mind, is that in recent years, the park guards at some of the more popular locations are demanding people to have a guide with them to climb any of the peaks. They are accepting Alpine Club membership cards as proof of competency, so it is a good idea to become a member of your home nation's alpine club and bring your card with you, otherwise you may not be let in without a guide. The enterance fee can be purchased at a variety of places in Huaraz. Consult the Casa de Guias for detailed vendor locations.

Getting There (Peru - Lima)

Fly to Lima. If you come from Europe and have all your expedition gear with you, the baggage allowance of the airline is an important factor. Typically, European airlines have a puny 20kg-limit on their South America routes. North American airlines and their code-sharing partners still allow one free carry on up to 50 pounds, and the standard two carry on bags. Any additional bags you wish to check will be anywhere between $25-50 per bag, depending on the airline. Flights to/from Lima from the USA normally seem to be the most economic choice. Personally, I have been able to get round trip tickets to Lima from one of the major US hubs for less than $500. 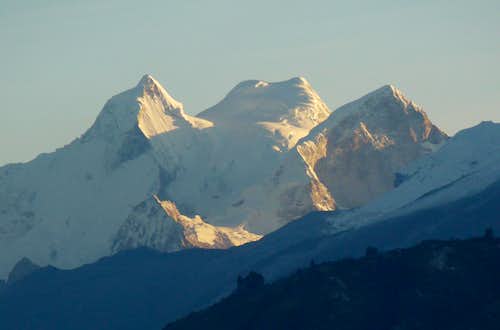 Though there is an airstrip in Anta (20km from Huaraz), there are no regular flights from Lima. So the only way to go there is a 7-9 hour ride by bus. There are several bus companies, each one with its own bus station in Lima. Three of them are listed below:

Note the prices do change depending on the season, and different classes are available. I always recommend the cama class (similar to first class on a plane) as it's only a small price increase but the comfort increases exponentially, as the seats fully recline, and you even get your own curtains for privacy.

All bus companies charge a reasonable fee for baggage exceeding 20kg. Tickets are best bought for on their respective websites and printed when you get the confirmation Email. Cruz del Sur is by far the best bus company throughout Peru, however most large bus companies have very nice buses. Using Cruz del Sur, they depart for Huaraz from either Javier Prado closer to Miaflores, or Plaza Norte closer to the Lima airport. Their morning bus leave Plaza Norte at about 10am. A taxi from the airport can take you to either place, however they will try to rip you off every time. Do NOT agree to pay more than $15 for a taxi ride to Plaza Norte, which is only a 15 minute ride. Once at Plaza Norte, you can check in at the Cruz del Sur window, and the buses are downstairs. Enjoy the ride to Huaraz. The road is long, windy, slow and beautiful!

For an excellent page about Huaraz, and what you can find there, see this page. This is one of the better pages on Summit Post!

The Cordillera Blanca is a long chain of mountains with deep valleys carving through to the main crest of the range, and these valleys all offer great access into the high peaks. Detailed below is some overview information for the most popular treks and climbs.

The Cordillera Blanca is typically divided into the north and south sections, for a handful of reasons, likely the most obvious being the ease of displaying on a map. There are two very long gravel roads that bisect the range, and cross the main crest connecting the drier, west side with the more humid and wetter east side. In fact, as you descend down the east side of the mountains, it's stunning because as soon as you get beyond roughly 40 miles east of the mountains, you enter a completely different landscape. The Amazon Rain-forest begins to take over, and the flora, fauna, people, culture, climate and the landscape change entirely. It's amazing the different worlds you can see from simply having a mountain range dividing the land.

The north part is probably most widely known for the Santa Cruz Trek, which some will say is one of the best treks in the world (although many climbers, including myself would have to disagree!). Perhaps even more famous is Alpamayo, voted at one point the most beautiful mountain in the world, and Artesonraju, whose north ridge profile is the backdrop for the Paramount Pictures Logo. There is a lifetime of things to hike or climb in this area alone, but highlighted below are some of the more common objectives, which can also be found on the detailed map below. For most of the famous treks in the Cordillera Blanca, most people hire burrows and the accompanying driver for a cost of about $20/day for the driver, and $10/day per burro. They can carry just about all your gear on the hike giving you more energy to enjoy the scenery and take side trips as desired. The burros also commonly take climbing gear to the popular base camps like the Alpamayo, Pisco, and Huascaran. Spanish knowledge helps immensely.

The southern part of the Cordillera Blanca is most widely known for the Ishinca Valley, and surrounding peaks like Urus Este, Ishinca, Tocllaraju, and Ranrapalca among others. The hike into Ishinca Valley is another very popular trek, and very beautiful. The Refugio Ishinca, owned and operated by the Italians and built in 2009, is a large hut complete with beds, and cooked food with a large dining area. Paying for the prepared food is something I really like, since I don't have to worry about cooking. However I haven't ever been impressed with their breakfast (or any Latin American Huts' breakfast for that matter), since they seem to think a few pieces of bread and tea constitutes a good breakfast. I always brought lots of extra food since the burros carry it in from the trailhead. That being said, their dinners are very nice, and even include dessert.

Many people simply opt to set up camp in the huge field though, and you will often see huge guided groups with rows of tents here. Ishinca and Urus Este are the most common peaks from base camp, and are both east ascents. Palcaraju is also accessed via Ishinca valley and offers the most difficult mountain to climb in the area. Few people manage to summit this glorious mountain. Continuing south, the range is guarded on the southern end by two of the fiercest peaks in Peru; Chinchey and Huantsan. Only the most advanced mountaineers attempt either of these mountains. Somewhat shorter objectives closer to the west side of the range are Churup and Shaqsha, both offering shorter overall ascents, but with equally technical climbing. The pocket glacier on the west face of Churup has been disappearing fast, increasing the objective hazards and difficulty of this peak. Churup is one of the two most visible peaks from Huaraz, with the other being the Ranrapalca/Vallunaraju group. 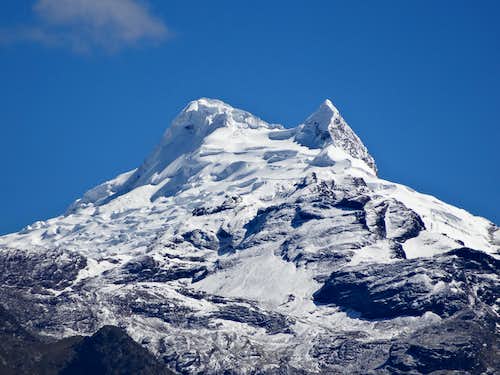 Vallunaraju from Huaraz in December

Annotated view across the Ishinca valley from route up Ishinca

The Huaraz area is a nice place to acclimatize as it offers a wide range of activities, for instance:

- Bus tour to Yungay and/or Quebrada Llanganuco (nearly daily) and hiking to Laguna 69
- Bus tour to Pastoruri (4800m, pressurized oxygen in the bus - no joke)
- Bus tour to Chavin on the Amazonian side of the Blanca (pre-Incaic ruins)
- Hiking to Laguna Churup (4500 m, 4h) which makes for a great acclimitization hike upon arriving in Huaraz
- Hiking to The ruins of Huilcauain (2h)
- Sport climbing right in town! Note that in 2016, the sport climbing mecca of Hatun Machay was destroyed...bolt by bolt...over the course of the entire summer. Truly a shame

Best Map: Skyline Adventures has 2009/2010 edition maps covering the Cordillera Blanca. It is split into a North map and South Map. They have marked current trails (classified into primary, secondary, and cairned routes) and campsites (established and advanced climbing). The scale is 1:75,000 and is printed on water repellent paper with a price of $12 a map. They can be bought, along with other books and maps at the Casa de Guias in Huaraz.

The Casa de Guias situated near the Plaza de Armas in Huaraz is THE spot where to gather information about recent snow and weather conditions. You will also find a posting board to place adds to find climbing partners and/or equipment for rent or sale. The typical climbing season is May through mid September during the Andean dry season. Even though technically it is winter during this time, the Cordillera Blanca is so close to the Equator that the days are all more or less 12 hours each and do not change in length. The wet season brings considerably more moisture to both the mountains and the city of Huaraz.

I would like to let you know that the new 2010 Revised Edition of Classic Climbs of the Cordillera Blanca, Peru is now available. To purchase please go to www.peaksandplaces.com. This is the authors webpage and all books purchased here will be autographed by the author.