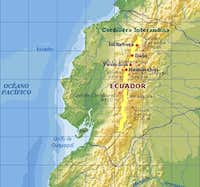 Cordillera Interandina.
It is a high altitude valley located west of Cordillera Oriental (Eastern Range) and east of Cordillera Occidental (Western Range) in the Ecuadorian Andes. It runs north to south between both Cordilleras and it is also known as Central Valley or Interandean Region.It was named as the Avenue of the Volcanoes by Edward Whymper during his visit to Ecuador. 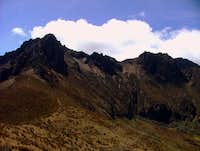 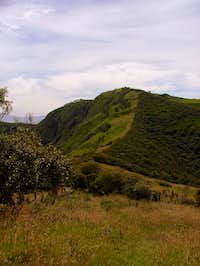 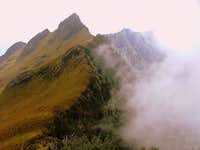 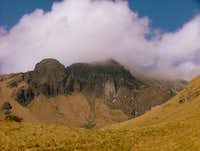 Imbabura4,630 m(15,190 ft)
Besides having Quito (2,850 m / 9,350 ft), Ecuador’s capital city set
on its high altitude valleys among with most of Ecuador’s major cities,
the Avenue of the Volcanoes possesses some high non-glaciated mountains located east of the Pana erican highway.Note: Even though Pasochoa and Rumiñahui are not geologically part of Cordillera Oriental, they are considered like that it in some guidebooks. 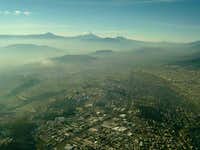 Quito (2,850 m / 9,350 ft).
Located just 25 kms south of the equator, Quito is one of the most attractive and dynamic capital cities in South America. It was declared by Unesco a World Heritage site. Quito’s main attraction is the “old town” which features historic churches and buildings from the 17th century considered as the most splendid and beautiful of the continent.Most of visitors spend a few days touring in the city, which at 2,850 m (9,350 ft) makes an ideal spot for acclimatization prior to the high altitude climbs in the country. An excellent departure point for the mountains.

Weather within the summer months of June and December tends to be more pleasant for climbing in Ecuador. Clear mornings and cloudy afternoons are common in the high central valley. However, cold temperatures should be expected at higher elevations such as those above 3,500 m (11,480 ft).Ecuador’s Interandean Mountains can be climb in a single day all year-round. It is advisable to start the climb early in order to take advantage of the cloudless mornings and to avoid possible late storms.

Camping is allowed in most of the Interandean Mountains. However, camping at the proximities of major cities is not advisable.

No park entrance fees, except for Ruminahui and Pasochoa.No parking permits for all the peaks.Pets are not allowed in Rumiñahui.