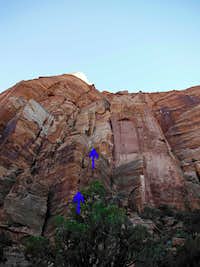 Cowboy Bob? Being the diehard route explorer I confess to be, I climbed Cowboy Bob Goes to Zion, but will not admit I enjoyed it. Most of the routes on East Temple will be comprised of bad rock, as is Cowboy Bob. But the south facing aspect of this wall combined with the lack of full sun moderates in Zion makes this route a consideration for free climbers. I climbed the route with Zach Lee, who did the first free ascent (FFA) of Cowboy Bob in 2008. Zach developed a strong memory from that trip: that he did not want to re-visit the 9th pitch, a 5.11R pitch on soft Zion sandstone. So we set out to repeat the route minus the last pitch and then rap the left side of the First Tower of Fate versus the bushy Big Momma Slot descent to the right. Dave Jones developed Cowboy Bob Goes to Zion in 1986 as a 5.10+, C2 route. Zach Lee freed it in 2008 at 5.11R. 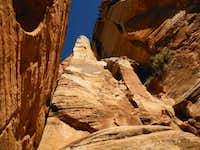 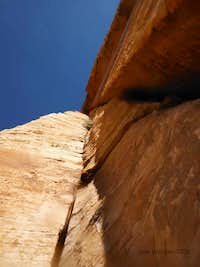 4th Pitch
This route sees few ascents to begin with, but it sounds like on the few it has received, climbers are skipping the first two pitches. Those are actually decent climbing pitches. The first pitch is the second best pitch on the entire route from a crack climbing perspective. Both follow the same crack system up to a ledge that is traversed right and up via a third pitch to the base of the premier pitch, the double crack corner. From there, the climbing is never quite as sustained, involving a few scary face leads if heading all the way to the top. More than likely the last pitch is going to have to be bolted before anyone attempts to free it again. The sixth pitch offers the best climbing beyond the marquee fourth pitch.

Don’t park at Pine Creek proper itself. Instead, continue east up the hill towards the Zion park tunnel and park at the next major curve in the road. Descend along a well-traveled trail (used to exit the Pine Creek Canyoneering objective), cross the Pine Creek wash and scramble up the slopes directly across to the base of the First Tower of Fate on the lower left wall of East Temple.

1st Pitch- 45m- 5.10+/ Supposedly the few who have climbed this route bypass the first two pitches. It was evident that these first two pitches had not seen much if any traffic but that could be said for most of the route. They are as worth doing as the rest. The first pitch is mostly a hand crack and considerably easier than several of the pitches above despite the 5.10+ rating on Bryan’s topo in his guidebook. Slip into a chimney below the First Tower of Fate and left of the obvious twin crack feature you are climbing on pitch four. Follow the obvious crack up to a ledge. The loose patina will not offer you much confidence for any holds outside the crack, but the crack itself protects well. Gear belay at a ledge below another crack/corner.

2nd Pitch- 30m- 5.9/ The crux of this pitch is off the deck on questionable rock via a right facing finger crack corner. Ascend this corner to a large ledge and belay at the right side with large gear.

3rd Pitch- 30m- 5.8/ You can go left or right up the gully to access a ledge at the base of the obvious twin crack corner above and right. It will be chossy either way.

4th Pitch- 55m- 5.10-/ This pitch is the crux of the climb as well as offers the best climbing on the route (without completing the original final pitch which is considered 5.11 R/X). Follow the tall right facing corner. Eventually a wide crack appears on your right (the twin crack). This wide crack is what prompts MP.com to specify a rack of three each through #5 C4s along with several big bros. Bryan calls for a single to C4 #6 along with extra 2” to 4”. We took one C4 #4 and #6 with no #5’s or big bros and were well short on gear thus dividing the pitch in two. The issue for me was the lack of trust of my small to micro placements in the white sandstone corner. The large crack halfway up the corner and out right takes all the C4# 4’s and 5’s you are willing to bring. Although this corner and eventual roof pull is aesthetic, the rock in the corner itself is suspect. Place tons of gear up the tall corner, pulling the roof out left above and traverse white sandstone slab to a ledge up and left for a gear belay.

5th Pitch- 45m- 5.10+/ The 5.10 moves on this pitch are short but quite tenuous on soft rock. Traverse up and right relying on suspect patina to access the easy crack. Follow the crack to the bomb bay chimney. Chimney-up facing left and pull the roof above. Keep climbing to a ledge (tree belay) below a much narrower and taller chimney above with a hand crack above it through better rock.

6th Pitch- 45m- 5.9/ This is a fun pitch on better rock than the lower pitches. Chimney up and pull over a small roof via a hand crack above. Continue jamming up to yet another ledge below a right facing corner.

7th-8th Pitches- 60m- 5.9/ You can easily combine these pitches by extending your placements. The climbing is not nearly as sustained as the lower pitches. Run up the easy corner and move left and continue up another crack. Keep going until you reach a flat ledge with a fixed rap station down the left side of the pinnacle feature you have been climbing.

Bryan Bird is working on a route up the left side of the feature you have been climbing on (First Tower of Fate). If you are going to use this descent, bear in mind some of the raps are on single bolts (2012). Some of the lower raps consist of bushes and trees. The first rap is off of two bolts at the top of the tower. Do not bypass a single bolt rap ring even though there is another single rope rap ring hidden below a roof below that you can reach with double 60's. We stuck our knot in the loose patina trying to do this and had to ascend our ropes a full 200’ to free it. Either way, you will be making a single bolt rap for your second rap (2012). The second rap takes you down to a unique narrow chimney. There is a double bolt rap on top of this chimney. Rap to the outside of it. From here there are multiple raps, trees, bushes and bolts. Bottom line is we rapped a solid 1000’ back to our bags with several small bushwhacks. There is an optional rap (Big Momma Slot Descent) down the east gully from where you topped out.

Single from C4 .3 to #6. Double from C4 .4 to #5. The fourth pitch eats up as much gear as you want to place. The rock in the upper half left side crack becomes suspect, thus the larger gear for the wide right side crack will leave you feeling all warm and fuzzy inside in comparison. We placed no wires. There is no fixed gear on the route, so a few extra variable pieces (link cam and/or offsets) are recommended as well. With all this gear on your harness, I recommend lightweight alpine draws (slings double binered), at least a dozen. The crux pitch is long and the rock suspect in places, extend your placements. South facing route, dress appropriately. The route is sandy and abrasive. Double 60m ropes for either rappel. Helmets a must.