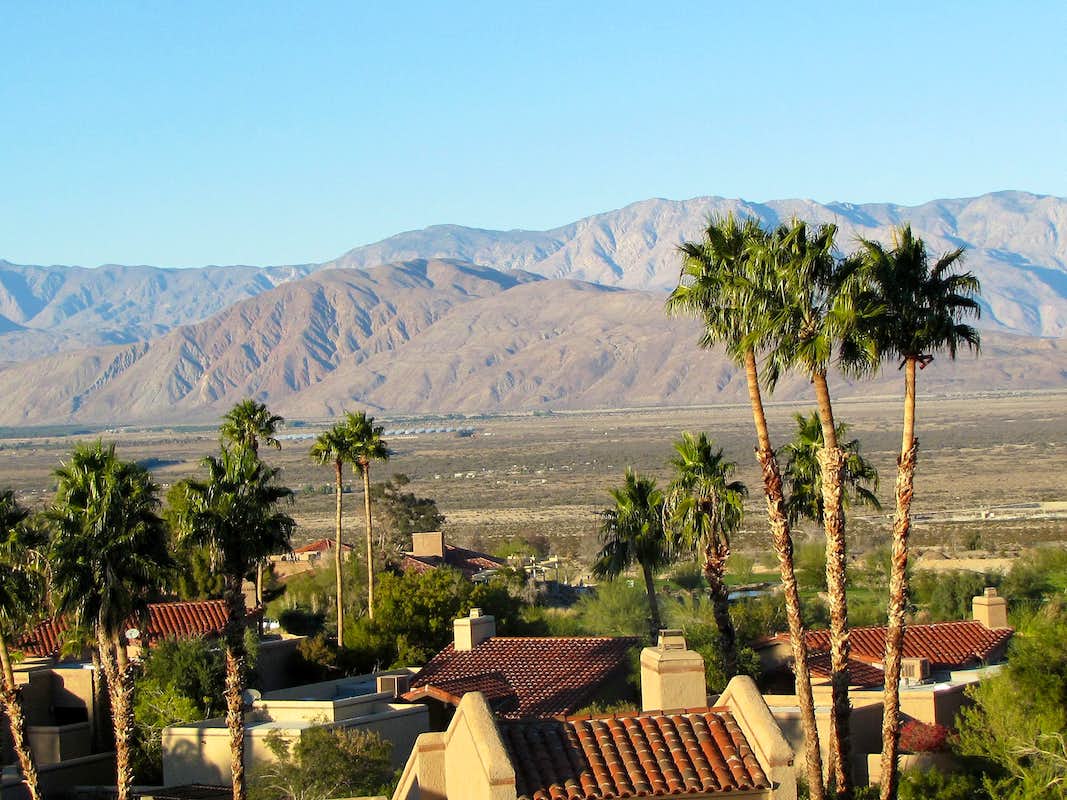 The south face of Coyote Mountain from where we stayed, the higher Santa Rosa Mountains in the back

This beautiful mountain was well visible from where we stayed for one week near Borrego Springs, CA. My heart, however, was set on climbing it long before I actually saw it. 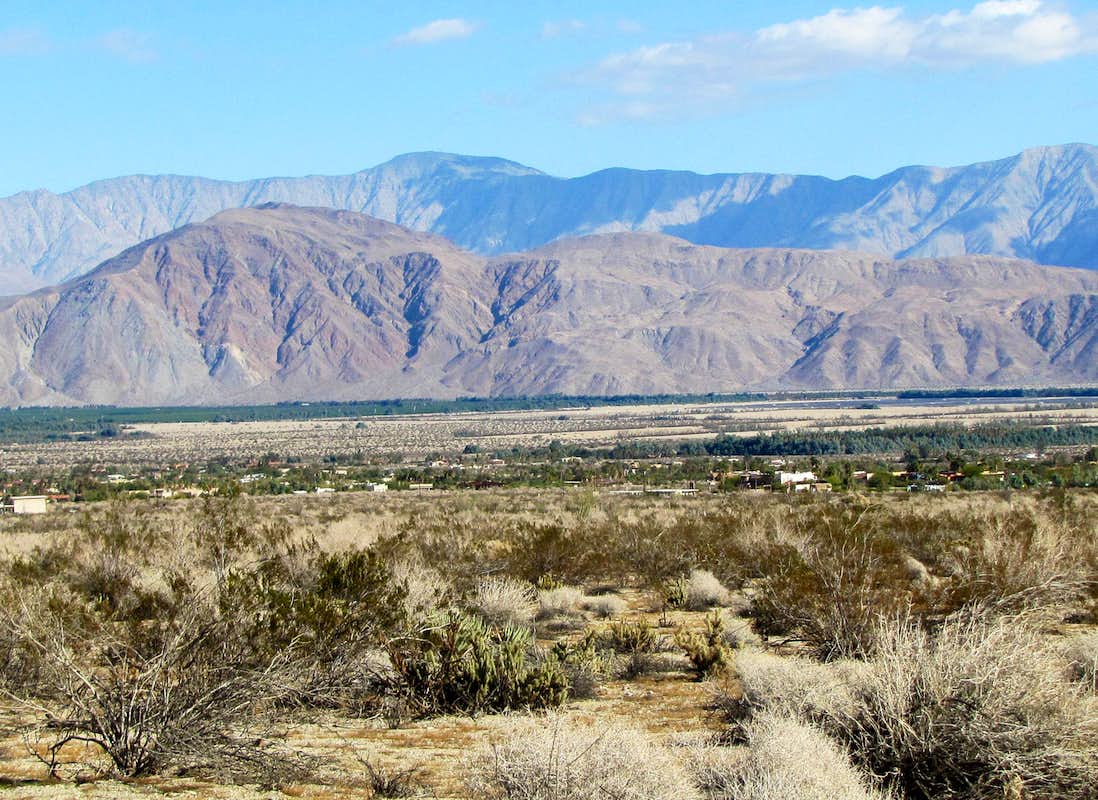 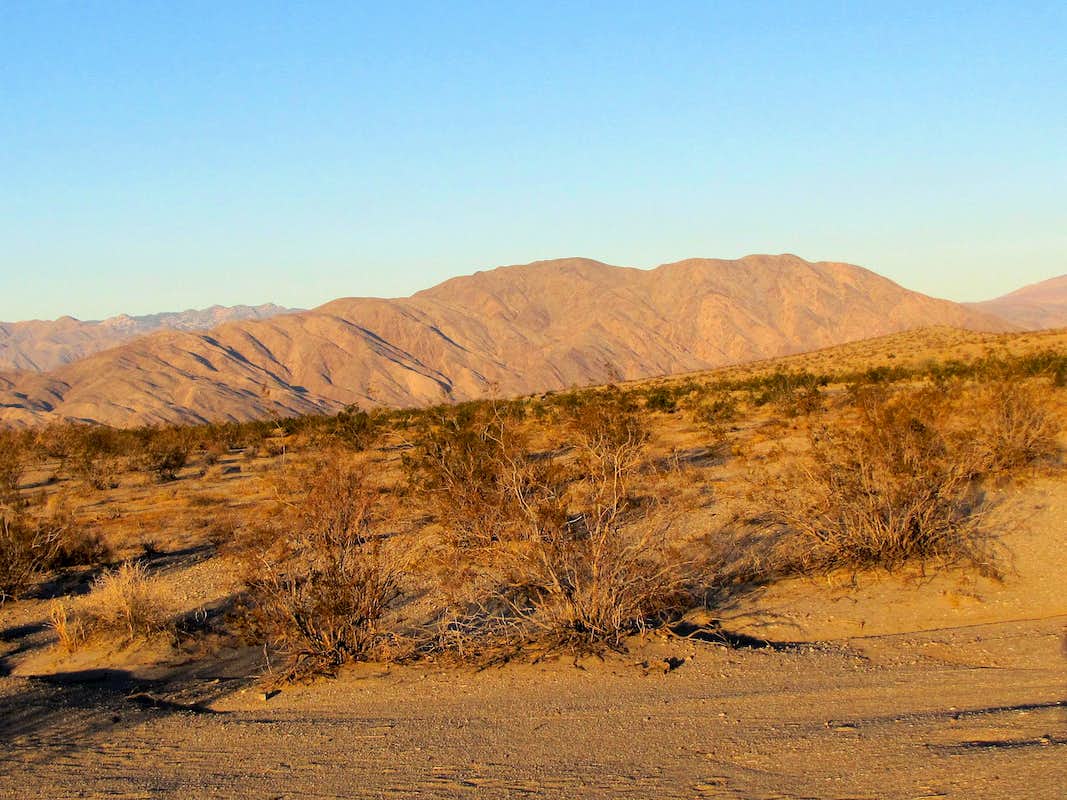 The east face of Coyote Mountain Left our vacation rental home around 6:50 a.m. and followed the good directions given on Summitpost to reach the base of the southeastern ridgeline of Coyote Mountain. The unpaved Rockhouse Canyon Road was not rough but I was somewhat anxious about driving it too far without having four wheel drive. As I was driving the dirt road, I saw a car parked off the road in the desert. The car had a solar panel on it making me think that the owner was staying there long term. Shortly after going by the car, I decided to park since I could see the southeastern ridgeline of the mountain not far away. As soon as I got out of my vehicle, I heard someone extremely upset yelling obscenities presumably at someone else but I never heard the other person. It must have been the guy in the car I had seen earlier but I was far enough from him that I could no longer see him so I did not think that he was yelling at me. I did not want to leave my vehicle there therefore I drove farther on the road until I reached what looked like a rock crushing operation/mine. No one was there. Parked in that area and began my hike at 7:30 a.m. The elevation was 560 ft and temperature 36 degrees F. From where I started my hike

Walked over the desert floor a short distance to reach the base of the southeastern ridgeline. I could still barely hear that man yelling in the far distance. The only words that I could discern were F*** You, F*** You. Was this a mentally deranged person? Was I going to come back to see my car trashed? I decided to continue hiking anyway. The higher Santa Rosa Mountains were visible behind me across the Clark Dry Lake Valley to the east. Hiking toward the southeastern ridgeline Got on the crest of the ridgeline and began to go up the relatively steep slope. A beaten path could be found here and there. I was expecting to find thorny cacti all over the place but to my delight I found mostly barren slopes with scattered desert shrubs. At an elevation of 1300 ft, the slope eased up a lot. I could see the path I had to follow to reach the summit. A canyon could be seen to the left. Continued up the slope. Thorny cacti appeared at around 2300 ft of elevation but I could still easily walk among them. Reached the very broad plateau-like summit at 9:35 a.m. A pile of rock marked the summit where I found a summit registry. An entry from 2 days ago said “Gimpilator was here”. I knew that had to be our own Gimpilator on Summitpost (which at that point I had never communicated with). It was cool enough that I had to put my jacket on. Had food and enjoyed the views. Left at 10:20 a.m. retracing my way down the ridgetop. Could see the ridgeline going all the way down to the desert floor. To my surprise, near my car, I heard that angry man yelling a few more times. I reached my car at 12 noon. Another car was there and I could see two men having hiked far onto the surface of Clark Dry Lake. I decided to do the same and took a different path from those people. Walking on the soft dried mud with the pleasant wind was very enjoyable. The views were fantastic. It was now 59 degrees F. I just did not know what to think, especially when I heard the guy yelling 4 hours later as I came down the mountain.

Cool looking peak. I've always had a soft spot for the arid types.

No actually seemed to be a regular car.

This was a great escape from the Wisconsin cold, (although we did get stuck in a snow storm on the way back to San Diego on I-8. Never thought I will be in a snow storm in San Diego but see not one flake of snow as I land in Chicago!!!)

Heather and I hiked up the same route as you, two days prior and that guy with the car and solar panels was yelling just as you described. Heather was concerned about leaving the car so near a person who is obviously disturbed. But our vehicle was not tampered with.

That makes it even more interesting. Hope you had a good time in Death Valley.