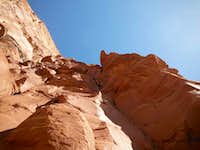 2nd Pitch- 110’- 5.10c
Coyote Tower on Courthouse Butte is one of the remaining classic Sedona Towers I had yet to climb, even though its approach is one of the shortest in Sedona. Its only published route as of 2013 is its namesake which typically takes six pitches to cover. Coyote is a slightly detached tower located on the extreme southeastern corner of the massive named Courthouse Butte. There is a typical Sedona jump across at the summit to Courthouse Butte proper, although a much less commonly done jump than the Mace or nearby Oak Creek Spire and not considered part of the climb. Burcham established the route in 1999. 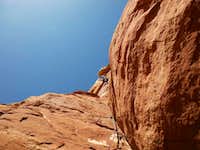 6th Pitch- 100’- 5.9
Four of the six pitches involve solid crack/trad climbing. The first pitch consists of a series of short bolted walls to access the true base of the tower. The second pitch is the crux pitch and offers a Moab Tower like (think Primrose Dihedrals on Moses) quality pitch that involves just about every climbing discipline in 100’+ of climbing up a west shaded dihedral. The third pitch is an easy traverse pitch moving the line back onto the southern face. The fourth and fifth pitches involve moderate (5.9) cracks with the fifth pitch requiring layback moves off the deck. The final pitch offers a pleasant and fun 5.9 finish up a solid crack to the summit of the tower. If not for the second to last rap, one could easily rap the route with a 70m rope. But as of 2013, two 60m ropes are required to rap unless one wants to reverse the third traverse pitch.

Park at the Bell Rock Vista trail head just south of Bell Rock, off of Highway 179. Hike towards Courthouse Butte, taking a right on the Courthouse Loop Trail. At this juncture you will have a good visual of Coyote Tower at the southeastern end of Courthouse Butte. Hike east along the trail until just past the tower and look to gain a faint climbers trail that cuts back northwest to the base of the route. There are a few bolts on the multi-faceted slab walls above that represent the first pitch. The start is directly underneath the south face of Coyote Tower. The second pitch climbs up the west side of this face while the rest of the climbing is on the south face.

1st Pitch- 120’- 5.8/ Climb up three short faces separated by ledges. The first face does not have a bolt protecting it, but rather has a small pocket (.4). The next two short faces each have at least one bolt protecting their crux move. This first pitch is mellow and fast climbing to a fixed rap anchor on the right at the top of this slab portion.

2nd Pitch- 110’- 5.10c/ This is one of the better crack/trad pitches in all of Sedona. Move the belay up and left to the base of the western face of the tower (the first pitch really is not on the tower proper) with an obvious corner/crack system pulling a small roof at the top. There was at least one bolt on this pitch, but it all protects well with gear. The first 80% of the dihedral involves neat movement in the 5.9+-5.10- range with good rests. The crux (5.10+) is definitely much more physical near the top where you overhang just a bit as you mantle several meters up the tight hands-fingers crack to the top of the corner and a comfortable fixed belay.

3rd Pitch- 70’-5th Class/ This is mostly a scramble pitch moving the belay back to the south face of the tower. Tunnel up easy ground to the other side of the slot, mantle up to the top of this feature you just tunneled through. Then up past a bolt to an airy ledge on the limestone band. Traverse right to a fixed belay and fixed rap chains. The fixed hangers allow a more comfortable belay than the chains. This is a great sit down belay perched on a small ledge with nice views and exposure.

4th Pitch- 90’- 5.8/ Move up and right to access a finger-hand seam through a red band of rock. This is a decent pitch of climbing to yet another comfortable fixed belay ledge.

5th Pitch- 90’- 5.9/ Layback (crux) the finger off-set crack (.4-.5 pro) off the deck for several meters until you can get a finger or hand jam. This is the most exposed (to a ledge) climbing of the day. The rest of the crack protects well. Once at the top of the crack, move right and surmount the chossy mushroom feature to its top and mantle up to the base of the final crack/headwall to a comfortable and fixed belay.

6th Pitch- 100’- 5.9/ Climb the nice finger-hand sized cracks in the dihedral to the top of the tower placing gear at will. The crack gets wide at the top, but there are ample jugs to surmount the final moves.

Double or twin 60m ropes. Single rack from C4 #.3 to C4 #4. Double #.3 to #3. We placed no wires on the route. Half slings, half draws. Helmets advised. South facing route, dress accordingly. End of February was ideal for us. Route goes relatively fast, can leave water at the base if efficient climbers.