One of the most photographed places in the world, Crater Lake National Park is Oregon's only national park. The Crater Lake caldera is the remains of 11,000-foot Mount Mazama, which collapsed on itself after a catastrophic eruption about 7700 years ago. The eruption was over forty times as large as that of the May 18, 1980 eruption at Mount Saint Helens, making the volcanic blast one of the largest in history. The resulting caldera eventually filled with water to create a lake that is 1,943 feet deep. Crater Lake was "discovered" by John Wesley Hillman's in 1853, though Native Americans were aware of its existence prior to that.

The lake averages more than 5 miles in diameter, and is surrounded by steep rock walls that rise up to 2,000 feet above the lake’s surface. Generous amounts of winter snow, averaging 533 inches per year, supply the lake with water. There are no surface inlets or outlets to the lake. Evaporation and underground seepage balance the inputs of rain and snow and prevent the lake from becoming any deeper. Crater Lake is the deepest lake in the United States, and the seventh deepest in the world. It has some of the bluest, clearest water one is likely to ever see.

The closest airports are located in Medford, OR and Klamath Falls, OR. When driving, use the map at the right and the directions below to determine the best route.

From the North (Summer)

o From Roseburg - Route 138 east to the park's north entrance.

From the North (Winter)

o From Bend - Route 97 south to Route 62 north and west to the park's south entrance.

Follow the road to Rim Village. This is the starting point for most winter ascents.

From the South (Year-round)

o From Medford - Route 62 north and east to the park's west entrance.

o From Klamath Falls - Route 97 north to Route 62 north and west to the park's south entrance.

It is possible to hike around the crater at the top of Wizard Island (the crater at the top is known as Witches Cauldron), but it's necessary to arrive there via the tourist boat (runs from early July to mid-September). Tickets for the tourist boat must be purchased first-come, first-served at the ticket booth at the Cleetwood Cove trailhead--it's best to arrive before the booth opens in the morning since tickets sell out very early. Not all tourist boats will drop one off at Wizard Island; however, some will drop the passengers off for either three hours or six hours. Swimming is permitted in the lake near the boat dock area and at Wizard Island (though most swimmers exit the cool waters pretty quickly!). SCUBA diving is also permitted, though a free permit must be obtained.

Within the national park, all of the flora, fauna, etc are protected. There are many large shiitake mushrooms in the park, but it is illegal to harvest them.

Wizard Island framed by The Watchman (left) and Hillman Peak.

Camping is allowed in the park at designated campgrounds. There are fees for camping.

198 sites, operated by the park's concessioner from mid-June through early October. Accommodates tent and RV camping. Pay showers are available. Reservations are taken, but half of the campsites are set aside for walk-ins. For reservations, call (888) 774-2728, or visit the website linked below.

Operated by NPS from mid-July through mid-September. 16 sites for tent camping only. Located 3 miles south of Rim Drive on the Pinnacles Road. Reservations are not taken.

There are also two lodges and a camping cabin village within the park:

Lodging located seven miles from the lake on the south side of the park. Open mid-May through September. For reservations, call (888) 774-2728, or visit the website linked below.

This classic national park lodge offers 71 rooms and a dining room overlooking Crater Lake. Open mid-May through mid-October. Reservations are recommended well in advance. For reservations, call (888) 774-2728, or visit the website linked below.

The Cabins at Mazama Village

The cabins at Mazama Village are located seven miles from the rim of Crater Lake. Each of the 40 cabins features either one or two queen beds, and a bathroom with a shower. Air conditioners are not provided. For reservations, call (888) 774-2728, or visit the website linked below.

For more information on the lodges or camping cabins, or for reservations, visit: 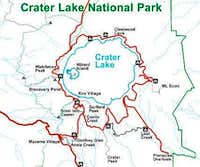 The park has many other mountains than just those on the crater rim. The highest peak in the southwestern corner of the park is Union Peak. The highest point in the park is a satellite peak, Mount Scott (8926 feet). Crater Peak (7265 feet) provides panoramic views of the southern parts of the national park (though not of the lake).

Finally, the summit of Wizard Island (6940 ft), the cinder cone within the lake itself, can be reached via a trail after taking the tourist boat to the island (see Red Tape above).

Note: As an area/range page, we don't have a site-generated direct link to the Climber's Log. However, if signing one or more of the peak Climbing Logs above doesn't fit your activity, you can find the one for Crater Lake National Park here:

With over 90 miles of hiking trails (see map), including 30 miles of the Pacific Crest Trail, not all hiking in Crater Lake leads to a summit. Other hiking opportunities include:

o Sun Notch Trail. This 0.5-mile (round trip) trail with 115-feet of elevation gain passes scattered wildflowers and a dry meadow to arrive at an overlook of Crater Lake and Phantom Ship.

o Castle Crest Wildflower Garden. Depending on where one starts, this trail can be 0.4-miles (from East Rim Drive) or 1-mile in length (from park headquarters). During the 100-foot of elevation change along the trail, one will see a small brook, lush vegetation, and spectacular wildflowers in the summer months.

o Cleetwood Cove. This 2.2-mile (round trip) trail leads from the crater rim to the lake shore. It is an 11% grade with a 675-foot elevation change. It is also the trail that is taken to board a tourist boat to Wizard Island (6940 ft).

o Annie Creek Canyon. 1.7-mile loop trail with a 200-foot elevation change. Leads to a deep, stream-cut canyon, Annie Creek. Along the trail one is likely to find wildflowers and occasional animals.

o Crater Lake West USGS Quadgrangle Topo
1:24000 topo of the western half of the Crater Lake caldera. Includes Wizard Island. This large file is used under the Creative Commons License.

o Crater Lake East USGS Quadgrangle Topo
1:24000 topo of the eastern half of the Crater Lake caldera. Includes Mt. Scott. This large file is used under the Creative Commons License.

Just cut and paste this into the main page for clickable links:

Two campgrounds in the park, neither of which are open during the winter months.

Two lodges inside the park; again, neither are open during winter.

Here is a web cam of Crater Lake.

No more such a thing as Golden Eagle/Age/Access Passes

Now there is a $80 America the Beautiful Federal Lands Recreation Pass good for entrance to all National Parks, National Forests, BLM, US Fish & Wildlife, and Bureau of Reclamation sites for one year from date of purchase. If you're disabled, you may want to get an Access Pass which are free and good for a lifetime. If you're 62 years of age or older, a Senior Pass can be purchased for $10 and they're also good for a lifetime. Click here for more info on fees and passes. Existing National Park Passes and Golden Age/Access/and Eagle Passes will be honored until they expire.