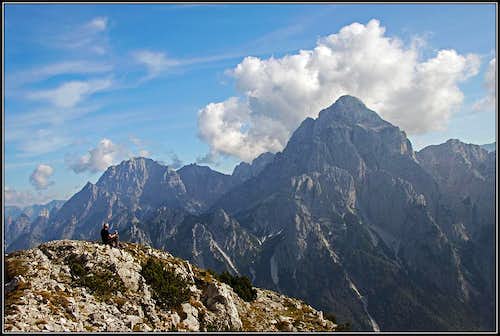 The old German name for this mountain is Krnitzenspitzen.

Catena di Malborghetto / Naborjetske gore is the northernmost chain of the wild Montaž group. It separates the broad, inhabited Val Canale / Kanalska dolina and the wild and beautiful Dogna/Dunja valley. Even if there are somer passages over the saddles, this streak is varying only a little by altitude. Going in exactly W-E direction, the summits on the very west are of a similar altitude than those on the very east. They all excel by unsurpassable views on Montaž group. There is nothing in Julian Alps, which can be compared with the elegance, strength and wilderness of Montaž, rising above the end of Dogna valley.

While the summits on the very west and east of Catena di Malborghetto are often ascended, the middle part hardly sees any visitor. East of Sella Bieliga (saddle) Monte Sechieiz o Berda / Brda is rising, for which it is still unclear to me where the easiest approach on top should go. Similar was the next summit towards the east, a 100 meters higher Cuel dei Pez. Till recently, when we decided to take the marked mule trail from the World War I, which crosses the southern slopes of both mountains. From it the last 100 meters of ascent route was not hard to be found and we could soon enjoy one of the greatest views on Montaž. Yes, those mountains are almost completely abandoned. Locals are staying on high alpine meadows, which can be today reached by mountain roads. But you will only rarely meet hikers on those summits. Only the summits which are reached by marked paths are more often visited.

There were different times though. Almost 100 years ago, during the WW1, this streak was heavilly fortified by Italian army (and the easternmost summits by Austro-Hungarian army). Remains of buildings can still today be seen and along the whole streak a marked path follows the ex military path. It was well built, but today the path is ruined on several places, where now some protection devices are installed. So, this panoramic trail is not for everyone.

A Little of Geography

East of Sella Bieliga, 1479 m, The mountain chain, coming from Monte Schenone/Lipnik continues with the heap of rocks called Monte Secchiez o Berda / Brda, 1839 m. This double peak is rugged on top and quite overgrown, so I still have no information where the easiest ascent on it goes. The western peak is supposedly reached from Sella Bieliga. The long arch of this mountain ends on the NE on Forcella Cuel Tarond / Vančela, 1740 m, where the passage goes over the crest. From this saddle, the crest goes in the SE direction and then towards the east. The first high elevation is Cuel dei Pez, 1943 m, its eastern fore-summet is 1897 m high. On the southern side there is Crossadon, the water sources north of the main summit are called Močila/Marcilla. On a nice terrace north of the mountain is Malga Granuda / Planina v Dupljah, 1501 m, and above it Monte Granuda, 1563 m. More towards the east beyond Forcella Bianca, 1762 m, the crest becomes quite wild and rocky, consisting of many towers, of which the highest is called Gosadon, 1968 m. NE of it is already the area of Due Pizzi / Dve špici. 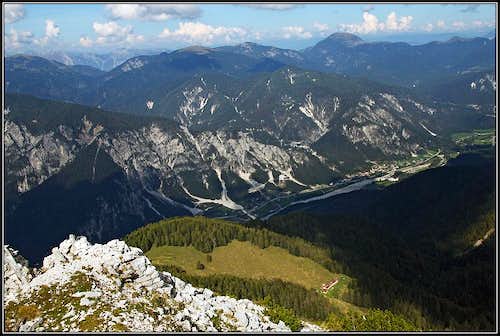 Cuel dei Pez can be reached from both sides, from the north and from the south.

1. Northern approach. The mountain road on Malga Granuda goes from Val Canale from the eastern part of Santa Caterina. It is closed for public traffic. The marked path No. 604 goes up more from the west. From Museo Naturalistico "La Foresta", east of Bagni di Lusnizza, 700 m, we go towards the SE. 2 h till the alpine pasture.

2. Southern approaches. From Val di Dogna we have two options, which can be nicely combined into an unsurpassable round tour:

2.b. From above Mincigos, 1001 m, we go directly up on Forcella Cuel Tarond. More towards the east there seems to go also an unmarked path up to Forcella Bianca. 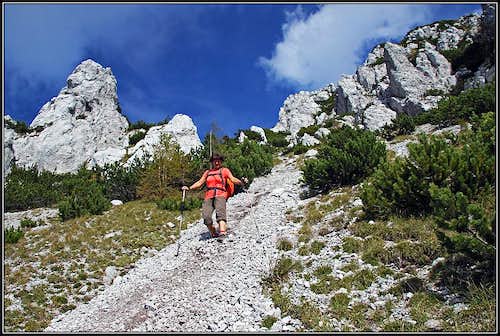 1. From Malga Granuda - East route. We go in the SE direction (path No. 604) towards the side ridge, where from the SE the path from Due Pizzi comes. By the ridge we deter right by the patn No. 649. Soon we reach Forcella Bianca, 1762 m. From there the historical Sentiero Battaglione Gemona goes towards the west. It uses ledges and natural passages, on a few places it's protected. Before the notch of Point 1847 m quite some attention is needed. Higher, the path crosses the southern slopes of Cuel dei Pez. Over them we ascend below the SE ridge on top (steep, carefully). 1 h 30 min.

2. From Malga Granuda - West route. We go in the SW direction by the path No. 647 towards Forcella Cuel Tarond, 1740 m. On the saddle we turn left and ascend over the SW slopes of Cuel dei Pez towards a distinct notch between the summit and the tower in the side (SW) ridge. Before the notch, we can ascend on top by the last steep scree field (or left of it). That's enduring and also requires some care. The second option is to deter towards the top from the notch below the tower. Through the pine bushes a weak trail was seen, but I haven't tried it. The third option is to cross more towards the east (at first a short, easy secured passage) and ascend on top along the SE ridge (as described above in #1). 1 h 30 min. A good description in Italian is here.

3. From above Mincigos. We park near the bridge over Rio Mincigos, on 1001 m. A nice path (No. 647) ascends up the forrested slopes. In many turns it goes alont the whole side ridge between Rio Mincigos (on the west) and Rio Budic (on the east). In 2 hours we reach Forcella Cuel Tarond and then in another 30 minutes as described above in #2 the summit.

4. From Chiout, 838 m. From the village we take the mountain road which goes to Casera Bieliga. On the altitude of 1380 m, just below the alpine pasture we deter right on the marked path No. 640. This is Sentiero Battaglione Gemona. It crosses the whole southern slopes of Monte Sechieiz o Berda (one difficult, secured passage), all the way to Forcella Cuel Tarond. 3 h 15 min till here. Then in another 30 minutes as described above in #2 on the summit.

No limitations. Mountain roads on Malga Granuda and Malga Bieliga are closed for public traffic.

On Malga Bieliga and Malga Granuda there are shepherds huts which are inhabited in summer. To ascend the summit you don't need to sleep on the mountain.

The ascent can best be done in dry season, somewhere between May and October. Summer can be very hot on the southern slopes. But if you choose a clear day, after a storm or rain, also a summer tour can be very nice. I strongly recommend you a day with a good visibility.