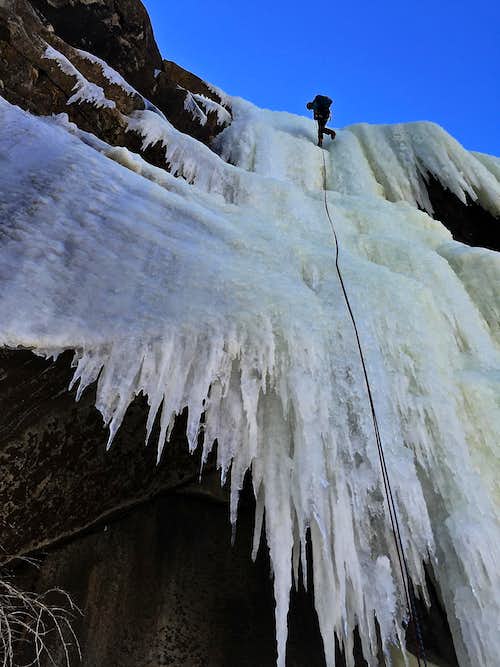 Jack Roberts wrote in his Colorado Ice that this is the longest ice climb in Colorado and possibly in the lower 48.

Mountain Project argues this mentioning other climbs being possibly longer, but what we are counting as an ice climb? I have done some of those possibly longer climbs (Campground Couloir, Cataract Creek, Sherman, Stairway to Heaven) mentioned by Mountain Project, but those appeared much shorter and easier. My partner is a long time ice climber (over 30 years of climbing ice) and he agrees with Monster being possibly the longest ice climb in Colorado.

What defines the length of the climb? Monster has only 2 pitches of “real ice” rated above WI3, the other pitches are on easier ice WI1-3. Do you consider rolling long angled ice as an ice climb? If yes, than the Monster is truly long. If interested only in climbs above WI4 difficulty, then Monster offers only 2 pitches + some access pitches, since the difficult section is in the middle.

Most people approach Curecanti Monster from the top and have to create rappel stations to get down. The knowledge how to create v-threads (abalakovs) is essential here. Your rappel stations will become your anchors on your climb up. 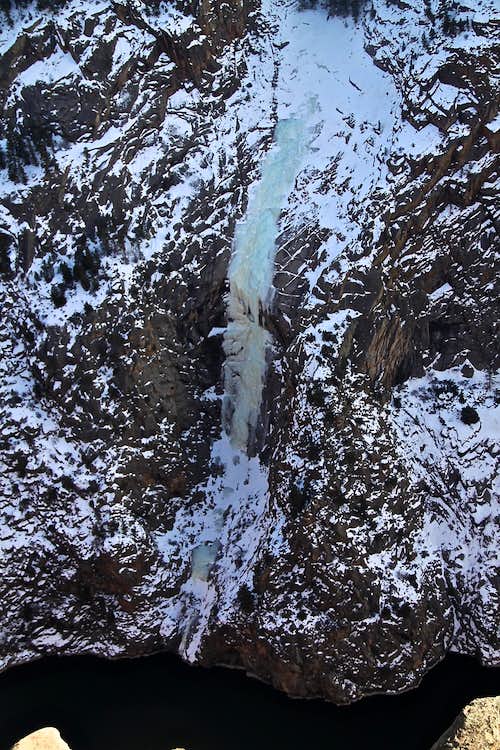 Overview Curecanti Monster
The approach from the top also creates a different feeling, there is no other way out! Whatever you descent, you will have to ascent later on. The ice climb is surrounded by steep rock cliffs, and below you are deep green waters of Morrow Point reservoir over dammed Gunnison River. There is no walk-off. If you are lucky and the reservoir is frozen, you may be able to experience a scary walk on its frozen surface. It is about 1.5 miles south to Curecanti Creek trail, and another 2 miles up steep and snow covered trail to the top of the canyon.

The approach on boat is possible in some years (this season February 2015 would be great since it was so warm), but it is at least 5 miles from launching spot at Pine Creek Trail boat dock. The deep canyon is not accessible at other places. Motorized boats are not allowed and the first section can have swift waters. The water levels also fluctuate based on the releases from Blue Mesa Dam above it. The current can make it difficult to paddle back.

Walking across the reservoir is possible in some years as mentioned above. I have not seen it frozen completely, but have seen photos of people hiking across and heard scary stories (again scary sounds right when approaching the Monster). The closest approach when considering walking across the frozen reservoir would be to descent along Curecanti Creek on a trail, mostly snow covered, 2 miles down into the canyon, walk over frozen reservoir about 1.5 miles north passing Curecanti Needle, and then return the same way. Supposedly the sounds one creates while walking on this frozen surface are frightening. Falling through would mean pretty much drowning. Be safe and use your judgement. Do not expect any help if something happens.

How do you know if the ice is in? A good question. We were wondering about this ourselves. I was sitting in my home half an hour away and enjoying the warm temperatures of nearly 60F. The orientation of the climb is in a shady part of the canyon and it is on its north facing side. Ice forms here early and stays in late. There is a way to see the Curecanti Monster, but you have to trespass on a private property (not recommended). If you drive on US 92 past Pioneer Point, there is a large switchback that passes Curecanti Ranch. The road returns back to closer to the rim of the canyon. Park about 1 mile past Curecanti Ranch, and walk directly towards the rim of the canyon. You should be able to see the upper pitches of the monster. The descent to the rim is long and you will be bushwhacking and if you want to see the whole Monster, you will have to scramble a little bit.

Curecanti National Recreation Area is adjacent to the Black Canyon National Park - great rock climbing destination. The area features several other ice climbs. I have explored only Chipeta Falls, which is a nice and much easier outing located on the opposite side of the canyon.

Prepare well if you attempt the Monster, and study your map. We got lost last year when we attempted this climb. We followed Mountain Project description which was mentioning to follow  along the power lines much higher up. By the time we figured our mistake, it was too late to climb. Expect being completely on your own. Deep snow will slow down your progress. Snow shoes or skis are needed for the approach. 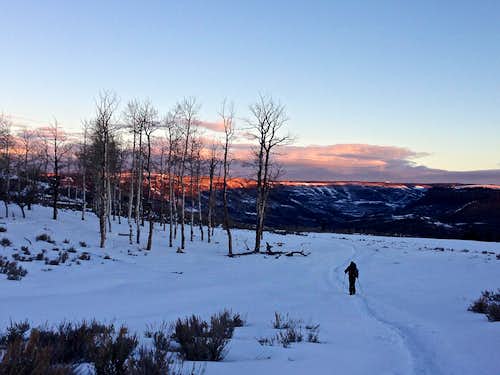 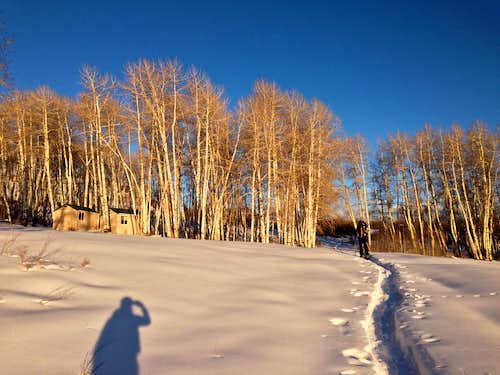 Approach to Curecanti Monster
The most common approach is a long hike from Hwy 50. Drive on US 50 to mile marker 124, about half an hour east from Montrose, and roughly 35 min west from Gunnison. There is a pull out on the north side of the road, which lies just east of some power lines. (This pull out may not be snow plowed). You can see those power lines from the road, and those are an important orienting point. If you get past the turn off for Alpine Plateau Rd. (if driving from Gunnison), you are too far.
From the pullout descent steeply down to the Blue Creek, look for a snow bridge to cross it, and then ascend the steep opposite slopes parallel to the power lines. Pass the first power line tower, and just before the second tower, take the dirt road (most likely covered with snow) in easterly direction. Follow this road gently downhill, pass through an open gate and fenced area. Shortly, you will see several cabins (mostly prefabricated empty cabins, looks like those are used during hunting season and in the summer), then slightly uphill and exit through another gate. There are no signs marking this as a private property, but be respectful and stay on the road. The road is public. Soon, you will see another set of smaller power lines, and behind those is a small knoll or hill. Stay on the road passing this knoll leaving it on your right side and as soon as you pass this knoll (=hill) turn off the road and start your descent into Curecanti Monster drainage. It is initially open, then you descent through aspen forest, finally through a more dense and darker forest. You will have to use some bushwhacking skills (climbing over and under logs). This section of the descent seemed long. Finally, you will start to see some light through the trees and that is where the Monster starts. The first rappel is from trees. There are no fixed anchors, slings visible. There were no signs of climbers ever being here.
Approach Time: 2.5 - 4 hrs depending on conditions (deep snow will exhaust you on your approach). 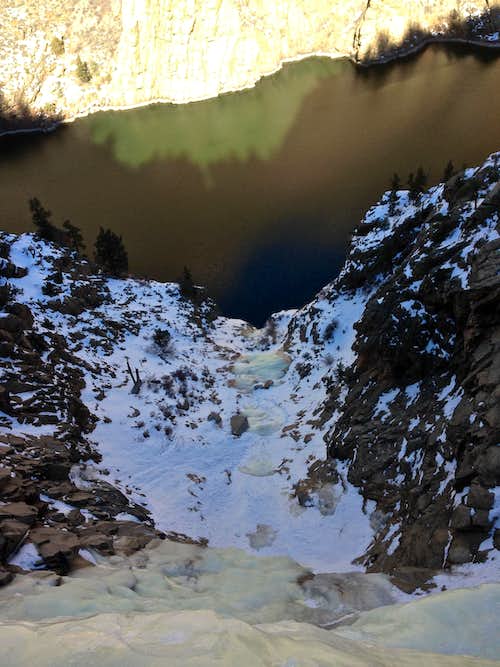 Lower pitches of the monster 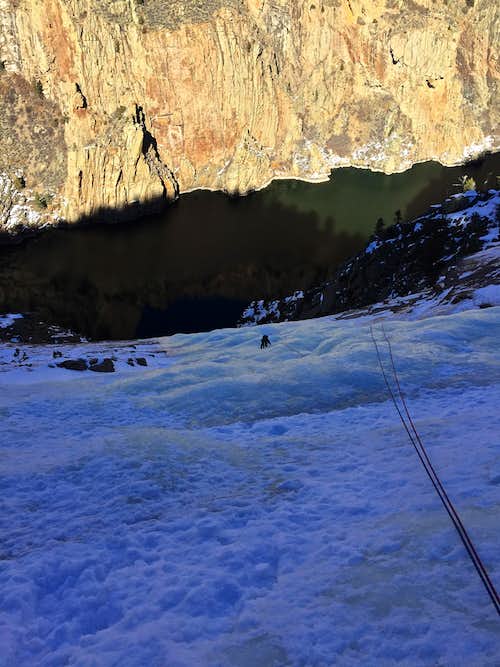 Upper pitches of Curecanti Monster
Length of climb: 300 meters
GPS co-ortinates are from the start of the ice (taken at the first rappel station from trees).
The climb is typically approached from the top, therefore I will start description with the descent.
Descent: There are no fixed anchors, rappel stations. The first rappel station is from trees. We found no slings, fixed webbing around trees. Each rappel is 60 meter long (we used two 60 meter ropes). It is a good idea to place a knot at the end of your ropes. The following rappel stations were from v-threads, which we backed up with a screw. My partner (more heavy) rappelled first and I followed removing the screw (we needed all our gear with us). You may not consider going all the way to the river since the first 2 pitches are relatively easy rolling ice.
Pitch 1: starting from the river, climb up on rolling WI2-3 ice for 55-60 meters.
Pitch 2: continue on the rolling ice WI2-3 for the next 55-60 meters
Pitch 3: it starts to get more interesting, follow several WI4 steps to a sheltered belay (sort of half cave with some very old webbing - not useable and a very old fixed nut).
Pitch 4: the crux, WI5, depending on conditions there may be or may be not WI5/6 pillar, and a relatively wide WI5 curtain of ice. Expect about 30 meters of WI5 climbing with not much break along. Climb for full 55 meters (30 meters steep and then it levels) to reach your v-thread station.
Pitch 5: another 55-60 meters of rolling WI2, nice calf burning pitch.
Pitch 6: and the last 60 meters of WI1/2 or snow hiking to the trees
We removed all v-threads as we were climbing up. No trash left in the ice.