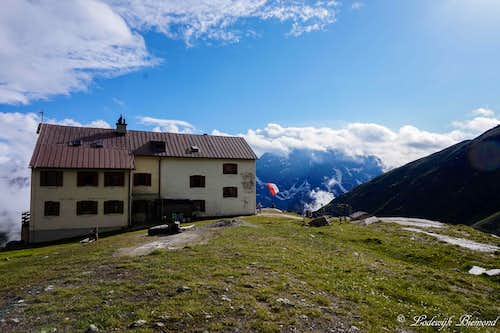 Düsseldorferhütte & Ortler (in the clouds)
The Düsseldorferhütte (also Rifugio Serristori) is a nice mountain hut situated beautifully between many 3000 meter peaks. The Düsseldorferhütte is the Hut with the probably the biggest variety of 3000 meter peaks to be climbed. Within reach are Vertainspitze / Cima Vertana (3545m), Hoher Angelus / Angelo Grande (3521m), Tschenglser Hochwand (3378m), Hinteres Schöneck (3128m) and Kleiner Angelus (3318m). Because of the relatively high elevation of the Hut at over 2700 meters, the altitude difference with the surtrounding mountains is not too big. Combined with the variety of tours possible from this Hut as well as the great views, this Hut is a popular objective for hikers as well as climbers.
The Düsseldorferhütte offers fantastic views towards the Ortler Group. The ''dreigestirn'' Gran Zebru / Koenigspitze (3851m), Monte Zebru (3731m) and Ortler itself (3905m) can be seen perfectly.
The Hut was built back in 1892 by the Düsseldorfer DAV section.After the first World war the Hut came in the hands of the CAI, The italian Alpine club and since 2010 the Hut is owned by the Province of South Tyrol. The Hut is guarded by already the fifth generation of the Reinstadler Family. The Hut offers 50 sleeping places and is opened between June and Oktober. 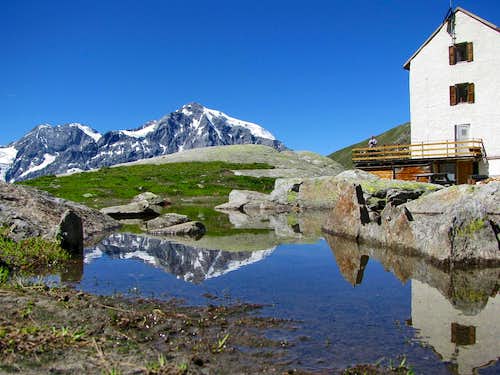 Ortler & Dusseldorfer Hut by flow
From Sulden take route 5. up. It is best to park your car at the bottom station of the Kanzellift. From here walk into the direction of the Zaytal. Soon you will be on route number 5. The route goes up through the Zaytal valley and up to the Hut. This route takes about 2,5 to 3 hours to get to the Hut. The trail is well marked and grade T3-.
Another option is to take the Kanzellift up to above 2300 meters. This will save you some vertical climbing meters. From the top station take route 12. After an hour or so this route will join route number 5. Follow route number 5 to the Hut. This route will take about 1,5 to 2 hours. Also see the External Links for a route description to get to the Hut with route topo's included.

Route Map: Dusseldorfer Hut
The route map (from Kompass Online) shows the 2 main access routes to the Hut. Take route 5 from Sulden or Route 12 and 5 from the Kanzellift top station.

Mountains to be climbed