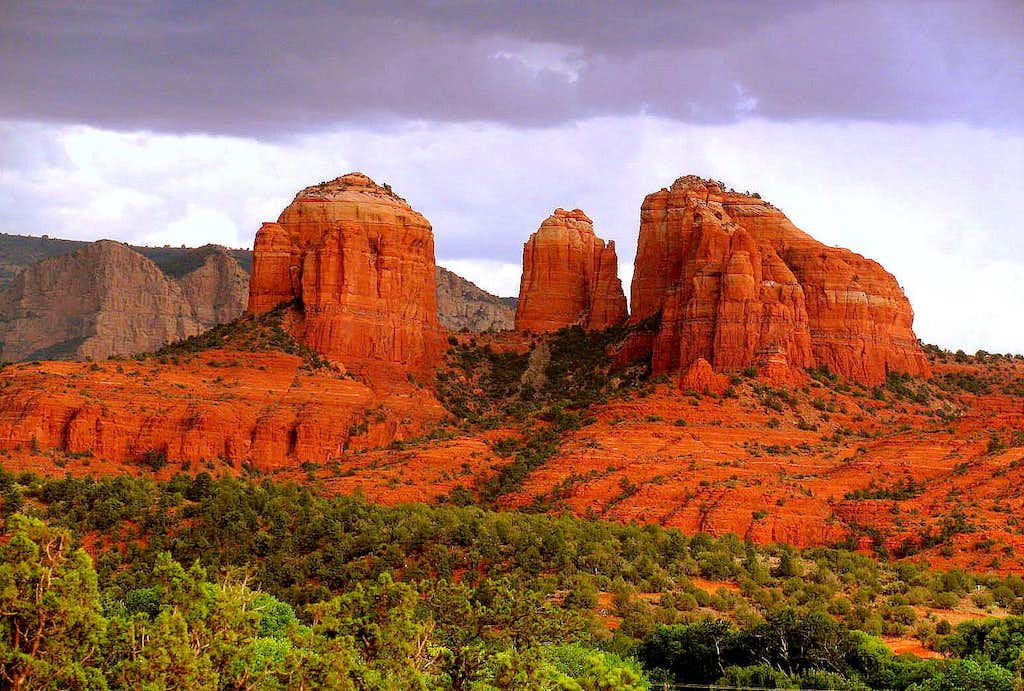 Eastern perspective of Cathedral Rock, seen from near Red Rock State Park on the south side of Sedona, Arizona. Pristine Oak Creek passes due north of this "facade of powerful towers" on its way to the Verde River. Rockclimbing.com lists 11 routes on Cathedral Rock; the most popular being The Mace. Red Rock Crossing is a popular swimming area, located along Oak Creek on Cathedral Rock's eastern end. The oxidized sandstone is particularly stunning after a rainstorm. Moments after taking this picture, my wife and I witnessed a localized "flash-flooding event" in west Sedona. The storm dumped 2" of rain in twenty minutes, producing "nickel-sized" hailstones and intense flooding along Sedona storefronts. Particularly hard hit (by the flooding) was TLAPUEPAQUE resort in south Sedona, where parked cars and other large objects were actually moved by fast-moving flood waters. Intense flash flooding can occur ANYTIME in the Sedona area. September 10, 2009
« PREV NEXT »

Looking at your pics makes me want to go back to AZ Larry! Awesome colours!
How is your dutch going btw?
Groeten uit Holland, Lodewijk

Thanks for posting this stupendous album of yours, Larry - the sceneries are just breathtaking!!

Yep, it's so breath-taking, that it helps to have a person in the room (with you)
who knows CPR when viewing photos of Arizona.