Tree at Base of Alzheimer's Onsight

The Dances with Elves area is immediately south of a huge roof forming southern boundary of the Ledge Area, which is the first climbing area at Little Stony Man as one goes from north to south. If that information and the pictures with this page are not enough to help you easily locate this spot, you may find the following additional information helpful, as it is from the authors of this online PATC guide for Little Stony Man:

The guidebook authors have identified only one leadable route at Dances with Elves, but it is also possible to find harder or easier lines on toprope. Toproping here is a hassle, though, because unless you know the area well, most routes are difficult to locate from the top, necessitating a lot of yelling back and forth with one's partner or extra trips up and down if one is solo; and because you will have to build a gear anchor, as the only trees are on the other side of the clifftop trail and you are not allowed to have ropes crossing the trail (nor should you want to).

The Little Stony Man parking area is in the park’s Central District at MP 39 on Skyline Drive. If entering the park at the Front Royal or Thornton Gap entrance, drive south. If entering at Rockfish Gap or Swift Run Gap, drive north. Note that there is an entrance fee for Skyline Drive. In 2015, it was either $15 or $20. To get directly to the base of the cliffs, hike on the AT to the junction with the Passamaquoddy Trail, which leads to a ledge offering a great view of the cliffs and then turns left to run directly beneath the cliffs.  Note-- Some boulders and outcrops near the northern end offer interesting bouldering and scrambling, and I have, in fact, done some bouldering there, but current management plans have made for the closure of this area to human activity.
One can also hike to the top of the cliffs instead and then follow The Chute down to the base, but it is much faster and easier to use the Passamaquoddy Trail. The Chute begins south of the open clifftop area. 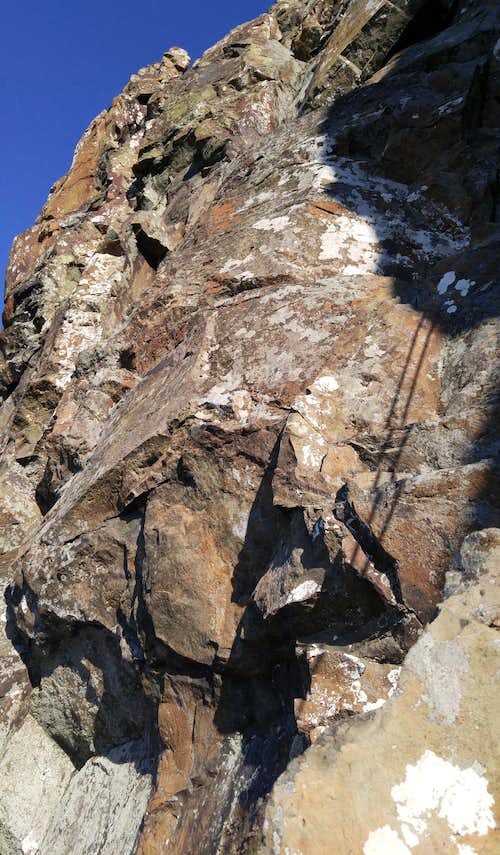 Alzheimer's Onsight from Sucking Crack
Alzheimer's Onsight (5.7)-- It was a cold day and the sun was not yet on the route, so I did this as a solo TR instead of as a solo lead, and I was more concerned with warming my numbing hands than I was with studying potential gear placements (the guide authors say the pro is sketchy in places). However, of several 5.7 and 5.8 routes I did that day and the next at LSM, I felt this was the hardest, though that may have been owing to the unpleasant conditions during that first climb, and I also think a went a little off-route, making it slightly harder. The route is steep and the solid climbing is sustained.
Most of this is paraphrased from the guide:
Beginning in the alcove just right of the big roof, the route climbs up to a large block that leans against another block. Climb directly over these blocks. The authors describe this as being tricky, but I did not have any problems with it (remember, though, I was on TR and didn't need to worry about protecting the move). Or, and this is supposed to be easier, traverse left under this spot and then work up and back over atop the blocks. Now ascend the wall to a large roof. Go under the roof and up its right side to then climb "steep to overhanging" flakes and then make an "awkward" traverse left across a block to reach the end. Alternately, go left of the roof and up a corner system. That is what I did.

Keep in mind that to date I have only toproped this route. However, I have always led at LSM with a standard set of stoppers, hexes, and cams. There are routes at LSM that require very large cams or Big Bros, but the guide authors do not mention Alzheimer's as being one of them.

The coords in the text are UTM coords. Ideally, some mention of that should be made as they aren't commonly used and will confuse a lot of people. I have converted them to decimal degrees and added that information to the header.

I added that the authors used UTM coords. Really, I probably shouldn't have bothered with their coords at all since as long as one can find the cliff, which is easy, it is simple to find the specific spot since the crag is not even 100 yards long.