How high is a cliff? How steep is it? Mountaineers have been measuring and estimating cliffs for centuries, but there are still those questions that pop up when nature fails to engineer a cliff with an obvious top, an obvious bottom, and a continuous slope between. Modern mapping has allowed us to measure cliffs all over the known world, without even going outside. 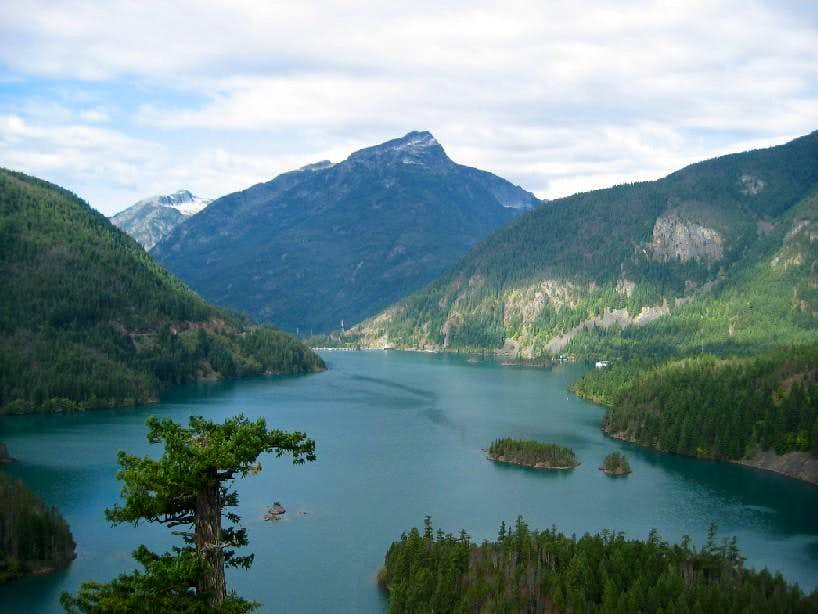 Davis Peak is a modest little summit, almost unknown by climbers, let alone tourists. The North Cascades Highway traverses its southern base, and there are two parking lots where hundreds, maybe thousands of tourists pull off each year to gawk. But they don't look up at the mountain much; they peer down from the bridge to Gorge Creek, a few hundred feet below. They have no idea that the mountain at whose foot they stand does more than hold up a waterfall or two. By at least one system of measurement, the far side of the mountain is the highest cliff in the state. According to people who fanatically count contour lines, Davis Peak's NE face is the only place in Washington State where the terrain drops more than a vertical mile in less than one horizontal mile. That side of the mountain is kind of hard to reach, let alone climb, but getting to the easy side is simplicity itself. 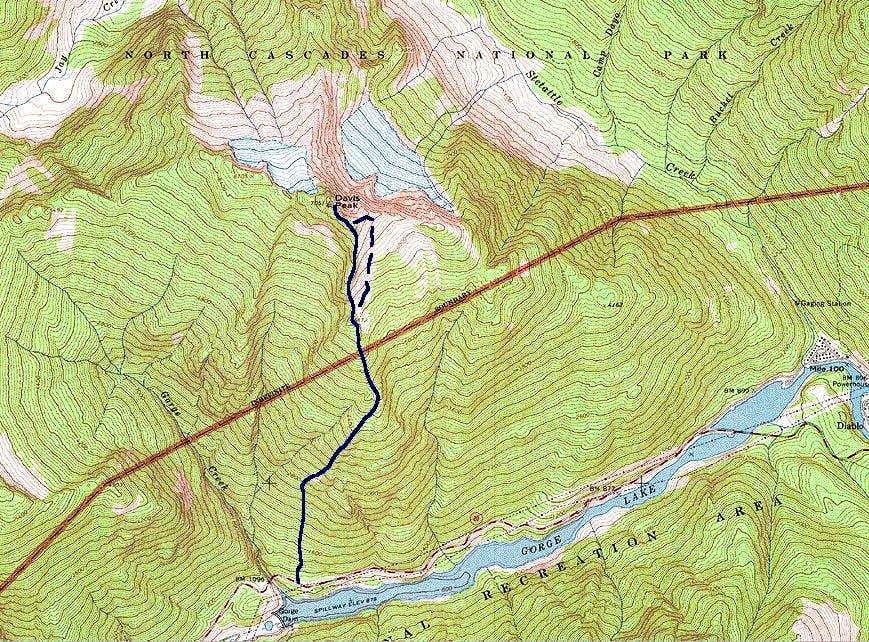 Drivers on the North Cascades Highway miss the dramatic side of Davis Peak. Gorge lake is the lowest of the series of three reservoirs on the Skagit River. Diablo Dam is just off the right edge of this map.

Drive the North Cascades Highway (SR20) to the bridge over Gorge Creek, about 2.6 miles / 4.2 km E from the Seattle City Light company town of Newhalem, or if you're coming from the East, about the same distance W of the bridge/causeway across Gorge Lake and the turnoff to the town of Diablo. Don't get so distracted that you miss the sharp turn at the E end of the bridge. The open steel grating of the bridge deck rings as you drive across it, and it gives a fine view of the chasm beneath your tires. As long as you're parking the car, get out and enjoy the view of the waterfall off the N side of the bridge, and the gorge below. It may be the only thing you do today that the tourists will understand.

There are parking lots at each end of the bridge; if I remember, the one at the E end is for motorhomes and other overlength vehicles. You should probably park at the W end. It's a short bridge, anyway. Elevation here is 1,096 feet / 334 m.

I won't attempt to describe the NE Face route, except that the approach starts by driving into the pretty little town of Diablo, to the northernmost street you can find. Walk off the street and across the lawn between two houses to find the unmarked Stetattle Creek trail, close beside the E bank of the creek. This is a quiet residential neighborhood – park where you don't block or disturb people and walk the extra distance. In fact, if you bypass the housing area and drive the lakeshore to just past the powerhouse, you can use the large public parking lot and the restrooms erected for the tourists enjoying the power-company tours.

You'll hike the Stetattle Creek trail a little over 2 miles / 3 km, then leave the trail and drop about 200 feet / 60m to ford the creek. Go uphill.

If you do this as an overnighter, you'll need a free Backcountry Permit, available in Summer from the North Cascades National Park / Mount Baker-Snoqualmie National Forest Wilderness Information Center in Marblemount. The Center is closed in the off-season; you'll need to apply at the ranger station on the N side of SR 20 in Sedro Woolley. There is no fee to enter the National Park, nor for the Backcountry Permit, but you can't reserve permits or pick them up in advance. Parking at most trailheads requires a Northwest Forest Pass, but there's no trailhead involved here; you'll be parking in a tourist parking lot along the highway. (You could verify that with the National Park if you want.) Check the Park website for hours. While popular backcountry areas have use limits to protect the environment, Davis Peak is seldom visited. There should be no problem with being crowded out of the area. Maximum party size is six “pairs of eyes,” as in people + pack animals. Animals would be a burden on Davis, and more than 6 people would be crowded, anyway. National Park phone numbers are 360/873-4500 ext.39 (Summer) and 360 856-5700 ext. 515 (off-season).

If you can pull this off as a day-trip, you need no permits at all. But I'd think twice about climbing 6,000 feet up and back through trackless, brushy forest with occasional cliff bands without any provisions for spending the night. 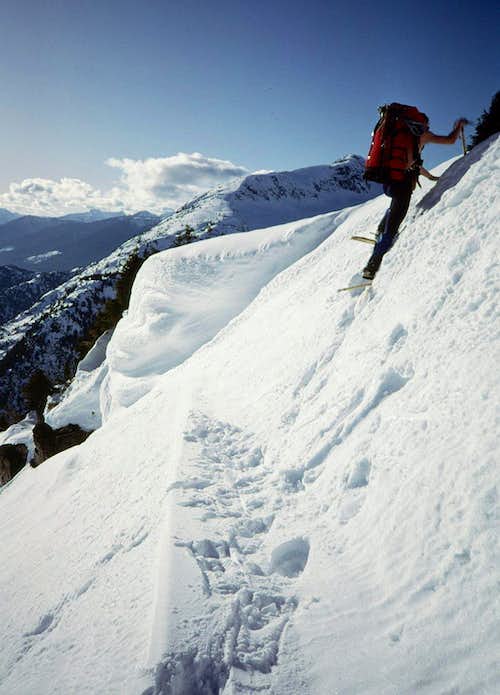 Davis might well be easiest in late Spring, when snow still suppresses some of the brush, and snowmelt provides water. Avalanche danger is minimal on the S side (I think). The route we took is almost entirely south-facing; it would be an oven in mid-summer. In late Summer or Fall lack of water might make it an ordeal. We did it over the first weekend in January. It meant camping in sub-zero weather and passing huge cornices overhanging guess-which-face, but the brush was minimized. In warm spring weather, with light bivy gear and no-cook food, it might be very pleasant. 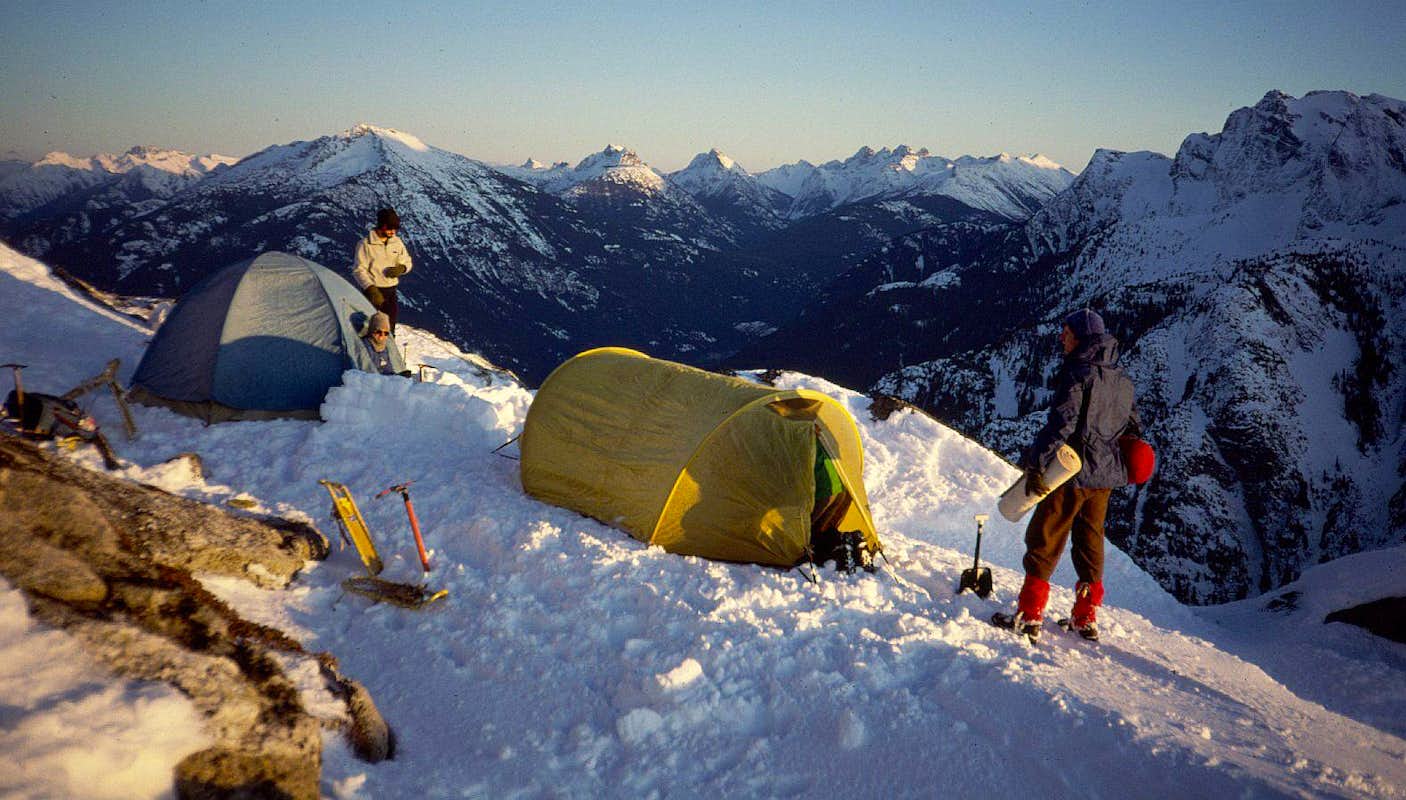 Davis Peak is on the west (wet) side of the North Cascades, so it receives considerable snow in winter, and significant rain amounts other times. The National Park has a Current Conditions page here. The National Weather Service provides a clickable map for localized conditions, even in the wilderness. Davis Peak would be about here. 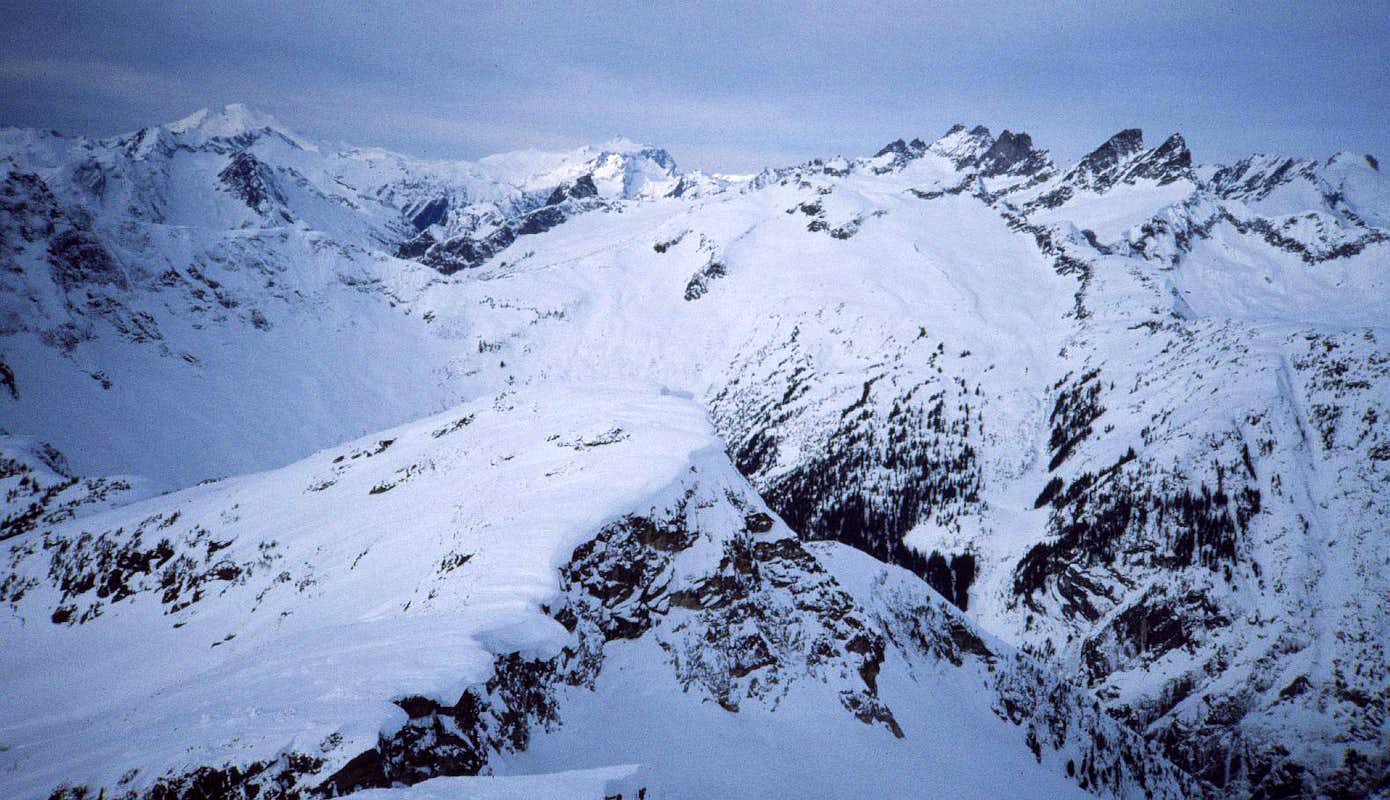 You'll want all the detail you can find in a map for this. Get the 7.5-minute USGS Diablo Dam, WA map. The Mount Baker-Snoqualmie National Forest map shows no detail for climbing, but covers enough detail to help identify distant peaks you might get a compass bearing on.

Fred Beckey's Cascade Alpine Guide, Rainy Pass to Fraser River has less than a half-page on Davis. That's a half-page more than any other book I've looked into yet. Let me know if I missed something.

www.Mapper.acme.com gives a full-screen, interactive USGS topo that can be switched to two kinds of satellite views or other standard internet maps.

Is That NE Face Really That High?

Wikipedia has a very short article about Davis Peak that mentions that NE face. It says that the N face of Kinnerly Peak in Montana is the only face that exceeds Davis in 1-mile elevation gain within the 48 contiguous states. The Wikipedia article says that the drop on Davis is 5250 feet – that may be measuring straight down from the summit. I angled my ruler a little to end in a gully, giving the extra vertical distance.

Mike Woodmansee's winter shot from Sourdough/Stetattle Ridge shows detail of the NE face.  The photo at the top of this article shows climbers passing the very shallow "V" in the almost-level summit ridge.

John Scurlock is a climber who loves to fly, photographing mountains as he goes. His PBase.com gallery of the North Cascades includes some stunning winter shots of Davis.