The Hardest Thing I Have Done So Far 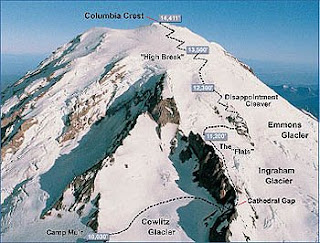 Three days ago, I began the hardest journey I have ever taken. Climbing Mount Rainier had been in my sights and every thought for almost a year now. On Friday morning, the weather was great and the climb started up to Camp Muir. Deciding to save 6.5lbs in my pack, I opted to not bring a second pair of boots. I simply wore my double plastic climbing boots the entire route. The first 2 or 3 thousand feet up played havoc on my feet. There were "hot spots" well established on each heel. After duct taping our feet, our party continued up the snow fields. About an hour outside of Muir, just below Anvil rock (the site that the hiker died at earlier this year) we were pulling our packs off to take a break. The clouds had rolled in on us and visibility was only about 30 feet. Out of nowhere a gust of wind came from the east across the mountain and took 1/2 of our party to its knees. Not a second latter the wind reversed directions 180 degrees and blew the other way at 50mph. Anyone who was still standing was immediately thrown to the ground, including myself. After a quick checkin, we were lucky to have only lost a few hats to the wind. The climb up the ice continued slowly, as small streams of water cut cracks into the glacier and poured into cravases under our feet. Camp Muir within sight was just a few minutes away.
Once at Muir with our bags unpacked and food in the furnace, we were off to sleep. I awoke somewhere around 9:30PM and went out to go and look around. I was amazed to see that the clouds that previously engulfed us had dissipated. A quarter moon dimly lit the skyline highlighting Mount Adams while the city lights of Portland provided the back lighting to Mount St. Helens. The stars were shining brightly and there was barley even a breeze. It felt as if it took me days just sitting there above 10,000 feet to take it all in. It was breathtaking.

The next morning we started off with a good breakfast and began our mountaineering 101 course. I must say, this was the first time anyone has ever taught me how to breath and walk. Who knew - I had been doing both simple things wrong this whole time. With ice ax in hand we were learning the crucial maneuvers for anchoring a falling team member. After "mastering" team arrest and self arrest we packed our bags and began the journey up to high camp and the Ingram Flats. Crossing over the Cowlitz Glacier cravases using natural snow bridges and hurrying through rock fall areas, we had reached cathedral gap. This steep section of scree and boulders is known for its dangers rock falls, and having whitened about a dozen of them, I did not argue when the guides demanded double time out of us. Safely through the gap we were short of an hour from our high camp at the flats. A good meal down and a great view prepared me to wake up at around 1:00AM for the next morning's summit attempt.

Thus far, the trip had not been strenuous or tiring for me, my 8 months of training had gone to good use. The altitude now at around 11,200 feet wasn't bothering me at all. My Mount Adams trip had been paying off. Out of the tent and tied up to my rope team, we were climbing by 2:00AM. Following the line of headlamps up the mountain, we soon hit disappointment cleaver. This is where things got tough. Backing up a bit, it is probably relevant to tell you that I am deathly afraid of heights. Scrambling in the dark up a rock face with huge drop offs to ether side, we were on our way up the cleaver. I was doing ok with the heights, until about an hour and a half into the cleaver. There was a section where the only thing holding me to the mountain side was a crampon toe pick on each foot and my grip to the rocks above. I was vertical. Still pitch black, the wind howling in my ears - I remembered the huge wind gusts from the previous day and how they had knocked me off my feet. My heart skipped a beat. "What if this happened right now", I thought. "Would the ropes hold if I fell?" "How was I going to get back down?". The worst thing had happened to me. Doubt entered my mind. I had lost my rhythm.

Another half hour and we were off the cleaver. We took a short break to refuel - and that is when the nausea set in. Snickers bar, trail mix, gorp, sausage - nothing would go down. I couldn't eat anything. We had been climbing the most difficult climb of my life - I was using muscles I didn't even know I had - and all I had in my stomach was a small bowl of oatmeal. Even that constantly felt moments away from abandoning me. Informing my team of my status, they offered encouraging words and hard candy. Four jelly beans finally made it down. That gave me the mental boost I needed to keep going. So I packed up, head pounding and stomach tearing me apart.

Twenty Minutes. Not a century, but twenty minutes is all this bought me. Reality kicked in. It was all I could do to lift my foot, I was falling behind on my rope team. The cleaver entered my mind - how was I going to get back down? "I think I ran out of steam boss." I yelled to the guide. His encouraging words gave me a few more steps. "How much further?" I yelled through the howling wind. Terrified of the response I waited. Eight months of training, thousands of dollars, so much dedication, 3 solid days of climbing had brought me to this spot. If the answer came back too big - what would I do? "About 2 hours." came the response.

My stomach was twisting and completely empty, my body freezing, and head pounding. I pulled every last amount of energy I had for each step. I felt completely and utterly physically, mentally, and emotionally drained. There was absolutely nothing left. As I looked up, the sunrise was just about to crest to the summit some 1,500 feet above me. And I knew - I was done.

I had used all off my energy to make it to 13,000 feet - my final destination. I had nothing more to get down. Coiling the ropes up, and re-grouping I realized that this whole time since last break, being so inwardly focused I had been oblivious to my rope teams status. When news broke that I had to turn, another of my team decided she would have to call it as well. Looking at the sadness in her face, I knew she saw the same in mine. Just then - it hit me like a ton of bricks. The reality of it all had set in. This was it - I was truly done. I wasn't going to make it. So much emotion and physical exhaustion forced a tear from my eye. When my climbing parter saw - she broke down. Just then she lost her balance, and my hand sprung to the rope to catch it. While it was nothing more than a wobble the shot of adrenaline this gave me was just enough to get me going back down.

Freezing, nauseous, and exhausted I took each step slowly. Feeling defeated I took one step after the other, back down the mountain towards disappointment cleaver. I knew then, how it must have gotten its name. The summit shining now in the sunrise however made me smile. Now instead of a jagged cliff, I saw a beautiful rock formation. Instead of a cravase to avoid - I saw beauty in nature. Thinking through the past three days - I had seen and learned so much. It had been an amazing trip. I realized I was still having the time of my life.

While my pace was slow, I had excitement in my heart. I was well above the clouds watching the sun come up over Eastern Washington. I was on top of the world. Coming down the cleaver was challenging as I expected - but with each successful step down I grew more confident - and energy filled my heart. I was having the time of my life. Hurrying past rock fall areas and passing other teams on their way up, we were soon back at high camp - the flats. When we arrived back at 9:00AM, I took a quick one hour power nap and woke up a new man. My headache was gone, my stomach back to normal and loads of energy. I scarfed down a bunch of food and prepared to head back to camp Muir.

From that point forward, the word slow was not in my vocabulary. I was wide eyed and cruzin'. I had energy and was destined to enjoy the rest of the day. As we had a few extra hours before the others would meet up with us, we explored rock fall and looked down some huge crevasses. Once the others had caught up with us, we swapped stories and prepared for the last 5 hours of the day's 14 hour climb. As we went down the Muir snow fields, I decided it was time to do some glissading. I was having so much fun, that hitting or not hitting the summit seamed trivial. After shoe skiing and glissading to the bottom of the snow fields we hit the trail once again. This trail seamed like a distant memory. Using my newly found walking skills we were soon at the parking lot.

That night, sitting at a bar in Ashford, WA with newly found friends, we laughed and shared stories of the trip. And most importantly, we made plans for next season's summit attempt. Training starts next week.