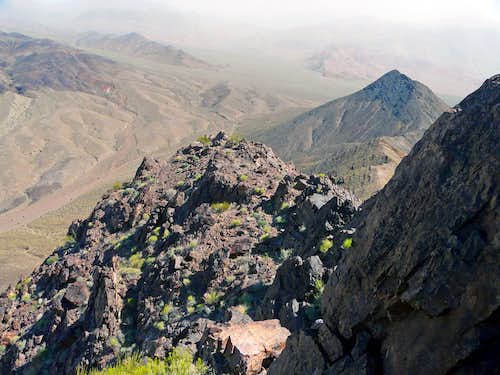 Anyone who's ever traveled on highway 374, either west from Beatty, NV toward Stovepipe Wells or vice versa, has seen Death Valley Buttes...though they might not even know it. This stand-alone mountain, though part of the Grapevine Mountains of northern Death Valley National Park, appears to the untrained eye as a nothing mole of a hill in the foreground of the much more visually impressive higher peaks of the Grapevine Mountains. Big, impressive peaks such as Corkscrew Peak, and, behind it, Thimble Peak, definitely draw the eye away from little Red Top, as it's also known.

In actuality, though, Death Valley Buttes is a prime little peak dying for attention. It's location is awesome - just a short distance off of highway 374 - and its less-than-imposing facade in truth offers up a great, narrow little exposed ridge for those heading to the top.

Considering its close proximity to the surreal sand dunes of Stovepipe Wells, Scotty's Castle, the lunaresque Ubehebe Crater, where I almost died once, Badwater, Dante's View, Zabriskie Point, Telescope Peak, and all of the other cool things that draw people to Death Valley NP, Death Valley Buttes makes a fine little stop-off for those needing to stretch the legs in the hills. Additionally, the Buttes, which are so accessible and short that even the average hiker could do the round-trip in 2 hours, can be coupled with Corkscrew Peak for a very rewarding half-day of Death Valley hiking.

Being only a few miles from the valley, the views from Death Valley Buttes' summits are considerable. This seldom-climbed mountain is a worthwhile endeavor-- for minimal effort (4 miles RT, 1000 ft of gain), the views, and, especially, the nicely exposed and narrow summit ridge make for a satisfying (and quick) jaunt. The easiest route is class 3 on a bad day. Harder routes can be found if you look for them.

From Beatty, NV (100 miles or so north of Las Vegas on highway 95): There's only one stoplight in this small town. From the light, head west straight toward Death Valley (there's adequate signage pointing the way). Follow this road for several (maybe 10?) miles until you cross over the border to California, at which time, the road becomes highway 374. Once on the California side, the highway starts to wind up into the Grapevine Mountains and soon crosses over the signed Daylight Pass. A few miles after Daylight Pass, you will come to the self-pay and unstaffed station for the east entrance to Death Valley NP...it's called, appropriately enough, Hell's Gate. (By the way, I love the names of places in Death Valley National Park...Coffin Peak, the Funeral Mountains, Last Chance Range, Hell's Gate...am I forgetting any?).  About a quarter-mile past Hell's Gate, park at a turnout near the base of the easternmost butte.

From Death Valley: From the Stovepipe Wells area of Death Valley, follow highway 190 eastward toward Furnace Creek. Soon enough, you will come to the signed and paved turn-off to Daylight Pass Road (highway 374) and Beatty, NV. Take that road and drive to the pullout mentioned above.  Should you reach Hell's Gate, you've gone a little bit too far. 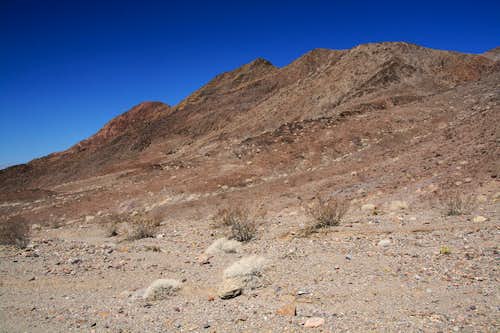 Seen from the parking area near Hell's Gate.

Year round. Summers are ridiculously hot.

There are established camping areas in the valley itself. Otherwise, to my knowledge, backcountry camping is allowed without a permit. To be certain, contact the park and ask.

Death Valley weather. Obviously, mountain weather can be significantly different from that in the valley. Fortunately, this mountain is not big enough, or far enough away, to be much different.