Debela peč from the SW, from Brda

The name is pronounced Debela petch and means 'a fat crag'. This nice and very popular mountain is the easternmost 2000m+ peak in Julian Alps. It is the last (or first) high peak in the long ridge, which stretches above the Krma valley in a SW-NE direction. Towards the north its slopes are steep and rocky. A part of this face is also a rocky wall, which offers some hard climbs in a solid rock. Towards the south its slopes are grassy, appropriate for easy hiking in summer and tour skiing in winter. These slopes are lowering to the high Pokljuka plateau.

In first place Debela peč is known as a first class panorama summit, which can be accessed from Pokljuka in some 2 hours. The most dominant figure in its panorama is of course Triglav, which is seen from the east. The neighbouring Rjavina, also beyond deep Krma valley, adds very much to the panorama and wild Martuljek group behind it as well. Towards the west and south-west the rest of Triglav group can be seen. Towards the south and east almost a black forrest of Pokljuka determines the panorama. In the distance Slovenian forehills and planes can be seen. And last, towards the east and north-east, beyond the Sava river valley the groups of Kamnik Alps and Karavanke are stretching.

Debela peč is also very often visited as a tour skiing mountain. From Pokljuka it offers some 800 meters of nice ski slopes.

Thirdly its north face attracts also climbers. Routes are not very hard, but appropriate and beautiful enough to be popular. In addition, although being easy to climb from the Pokljuka roads, Debela peč ascents are also supported with a nice mountain hut on Lipanca (alpine meadow). The three huts there are a popular goal also for hikers who don't attempt to reach the summit of Debela peč.

Pictures of the Summit Panorama

The Ridge Towards the NE 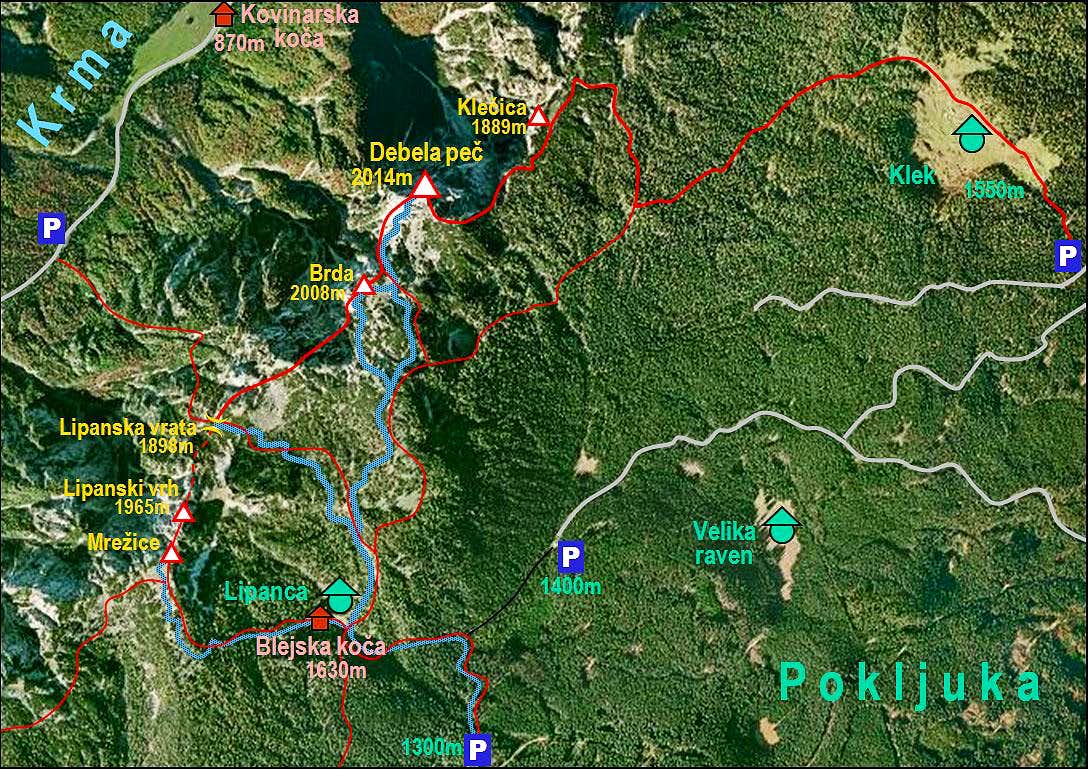 Debela peč and its marked paths

Even if Debela peč is the last high and important summit in the ridge, the mountain chain continues in a similar manner towards the NE, down to Radovna valley. The first summit NE of Debela peč is Klečica, 1889 m, named so by the nearby mountain pasture Klek. From its summit you have a nice view on Debela peč from the other side and especially the NE wall is beautifully seen. Then the ridge branches. The NE branch soon sinks down in forrests, while the N branch has one more summit to mention: Stresenica, 1789 m. Between both branches Stresena dolina lowers down to Radovna. These summits are rarely visited. You reach the edge (and the saddle) above Stresena dolina by the marked path from Klek on Debela peč. This path turns there sharply towards the SW and crosses the slopes of Klečica. You have only a few minutes to reach its top from the path. According to my friend's personal information Stresena dolina and the shoulder of Stresenica can be also a worthwile goal of a ski tour.

The Ridge Towards the South-West

Between the Veliki Draški vrh group and Debela peč on the main ridge above Krma valley there are several nice summits, all very appropriate for hiking and tour skiing. As they are not so important, for now I am describing them here. Each every one of them offers a nice panorama on Triglav group.

An unimportant summit SW of Debela peč. The marked path goes just below it and in winter it is often accessed with skis.

A nice, rocky summit just above the Lipanca meadow. It is best ascended from Lipanska vrata, a notch in the main ridge, where marked path comes up from Krma valley and descends on Lipanca. Towards the SW a notch is dividing Lipanski vrh from its foresummit Mrežce.

The fore-summit of Lipanski vrh. Marked path crosses it on the southern and eastern side, but Mrežce summit is most popular in winter. When tour skiing season starts it attracts skiers every day, also in hard winter. The most beautiful is its south ridge, from which people usually ski down on Lipanca.

A broad, grassy summit, also very appropriate for tour skiing. Very nice is its SE ridge, but you can also ski down towards the SW and descend on Pokljuka below Selišnik.

Veliki Selišnik, 1952 m. This summit is seldom ascended, because it is remote from the main ridge. Also the marked path goes north of it through the broad Solnice valley, which finishes high below Mali Draški vrh and is again very popular as a ski tour. Just before Mali Draski vrh lies Kota 1979 m (point 1979 m). It is more an edge above Krma valley, but offers a nice view on Mali Draski vrh and a ski tour towards NE (Solnice) and SW.

Getting There and Routes Overview 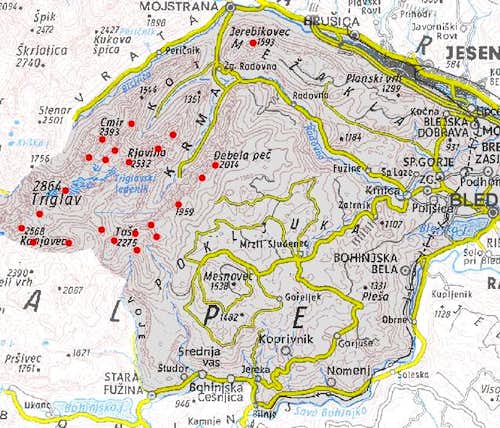 A self-made map of the area

To get into Krma valley, you first drive to Radovna village (either from Mojstrana or from Gorje) and then towards the south till Kovinarska koča. Actually the start of Debela peč trail is a bit further towards the valley end.

On Pokljuka plateau you arrive from Bled or from Bohinj. Both roads join on Mrzli studenec meadow. For Debela peč you drive from there towards the N and then towards the W (for Lipanca hut) or further towards the N (for Klek alpine meadow).

1. From Lipanca meadow. The easiest way to climb Debela peč is from the south-west. You start at the end of a forest road on Pokljuka, go up to Lipanca alpine meadow and continue by a marked path towards the NE. From the road you need less than 2 hours.

2. From Klek meadow. The starting point is even higher than for the route via Lipanca, but the path from Klek does not go so directly on top. From the road we first go to the first huts of Klek, then descend into the big cauldron of the pasture and then continue through beautiful larch woods towards Debela peč After some 30 minutes from the meadow we reach a clearing in woods, where the marked path for Debela peč deters right, quite away from the mountain. It goes up in the northern direction and just before reaching the main ridge the path turns again getting the SW direction. Now we cross the slopes below Klečica, descend on the notchs between it and Debela peč and finally in a steep ascent reach the top. 2 h from Klek meadow, medium hard hike-up.

3. From Krma valley. The other possibility is a marked path from Krma valley. From Kovinarska koča (hut) you proceed by the valley and after less than 2 km you find a marked path turning towards the south and south-east. The path uses beautiful passages and brings you over steep slopes above Krma valley to Lipanska vrata (saddle), 1898 m on the main ridge, from where you proceed towards the NE to the summit. The 1150 meters can be ascended in some 3 hours. Kovinarska koča (hut) is also a starting point for climbing tours. You can find Information for the broader area on Julian Alps page. Maps: Julijske Alpe - Vzhodni del (Eastern part). Planinska zveza Slovenije. 1:50.000. 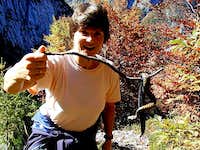 Besides the three normal, hiking routes (all marked) in Debela peč north face there are a few climbing routes. According to Borut Kantušer the Jesih-Potočnik topo below was photocopied from the book: Slovenske Stene (Slovenian Walls) by Tine Mihelič and Rudi Zaman, Didakta, Radovljica. The author of the topo is Aleš Dolenc. 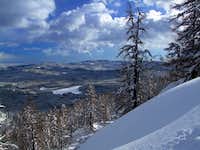 The whole Eastern Julian Alps are national parc. You can drive by the above mentioned roads at no fee.

For the summer ascent the best months are from July till October. For tour skiing usually the best conditions are from February till April. Otherwise in good conditions the mountain can be climbed any time of the year. Weather: see the official page for Slovenia here. Even better site is wunderground - here's the direct link to Kredarica station, 2515 m (below Triglav summit.

On Pokljuka plateau you can sleep in Sport Hotel. The two useful mountain huts of Debela peč are: