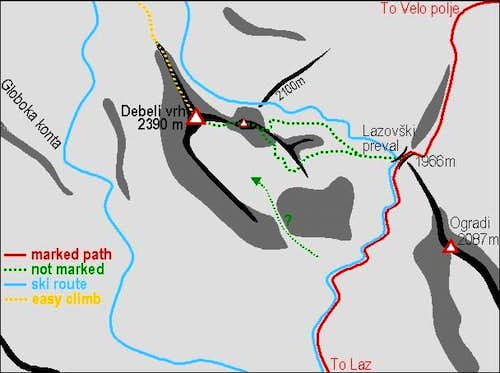 Debeli vrh and its routes
Lazovški preval (pass), 1966 m, can be reached by a marked path from two sides:

Both approaches are easy and the paths are well marked. 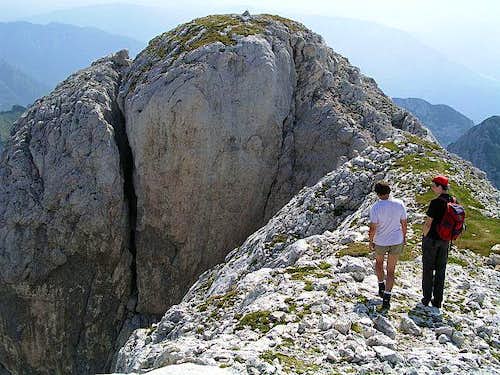 Descending from the main summit of Debeli vrh
Looking from Lazovški preval towards the west, to our mountain, we see steep rocky slopes and right of them a broad, flat karst slopes, leading to the high edge, NE of the summit. We can choose two approaches, on both we can now follow a weak path, but they are not marked and both require a safe step.

Variant 1. We approach Debeli vrh bottom rocks, cross a shallow valley and turning a bit to the left scramble up where passages are easiest. We can follow a weak path, which above, on the grassy shoulder becomes even stronger. Slopes are steep, so we must take care if it's wet or if we are ascending when on the slopes snow lies. Over the shoulder we soon reach the east ridge and the fore-summit.

Variant 2. Right of Debeli vrh rocks we ascend karst slopes, choosing best grassy passages. Here we can hardly follow any path. Our direction is NW, towards the high edge of these slopes (orientation in good visibility not hard). Approaching the high edge of slopes we keep more and more towards the left, where on scree slopes we soon find a good path, ascending steep to the east ridge of Debeli vrh. The ascent is unpleasant, but not exposed.

From the fore-summit we first descend to the notch just below. Here we have a few meters of easy climbing (UIAA I-II). From the notch to the main summit there are no more problems, in a few minutes of scrambling we reach the highest point.

If we want to avoid the climbing passage (it's really short) a detour by southern slopes of the fore-summit is also possible (but also steep and crumbly).

Good shoes, poles. For the notch traverse the rope is not necessary, except for unexperienced. In this case a short rope is enough, because there's only some 5-10 meters of climbing.