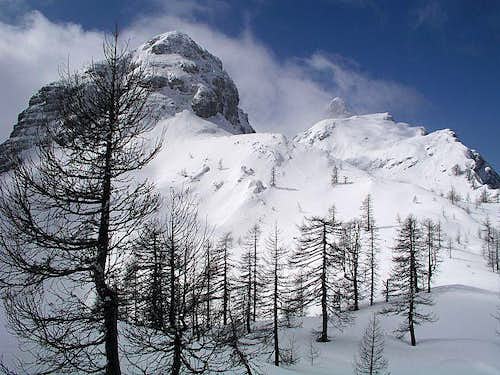 Selišnik from the ascent on Debeli vrh 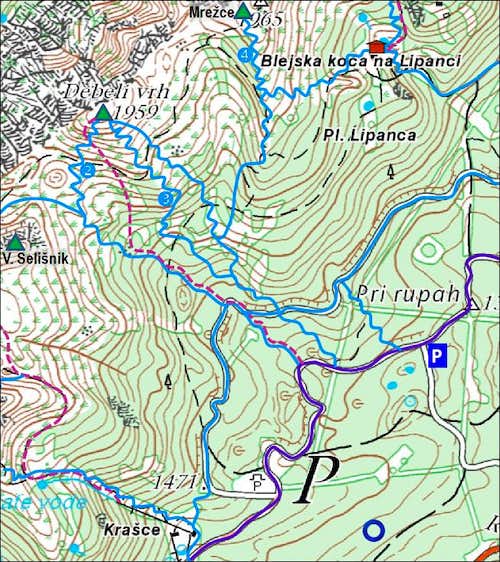 Debeli vrh, 1950 m, is a relatively unimportant summit in the crest above Pokljuka plateau. As all other summits, also Debeli vrh offers very nice ski tours. Because trailheads for these tours are between the popular Rudno polje and Lipanca meadow, Debeli vrh is not so often ascended as for example Viševnik or Mrežce. The other reason is that skiers also don't know that orientation problems in the lower part of these tours are not so difficult as it may appear. Basically there are three directions of skiing down. All will be shortly described here. They are very similar in the fact that above you can virtually ski wherever you want, and that below you have some steep forrest slopes where you need to search for best passages. The view from Debeli vrh is as great as from any summit above Pokljuka. I was so many times on those summits, but am again and again surprised when coming up from Pokljuka by their gentle slopes, suddeny Triglav rises on the other side of the deeply cut Krma valley. On Debeli vrh ascent
All ski tours from Debeli vrh are easy on the upper part. Gentle slopes are ideal for skiing, you can choose direction wherever you want. Below, through the woods there are some steep sections, also intermitted with rocks, so you need to choose passages carefully. Orientation is medium hard. Below, even finding the starting point is not easy. The fist 200 meters up through the woods depend on your common sense and perhaps old ski tracks if you find any. Don't rely on all of them, not every skier here is an expert. But basically you can not miss much. Above, among the upper larches you see where you are and can correct the course of ascent. Not big harm though, even if missing the intended course can make you feel stupid, even if you know those hills already well. On all tours you have some good 600 meters of elevation to overcome. That would make some 2 h 30 min for ascent. Equipment: Usual tour skiing gear.

See the parent pages how to get to Rudno polje. There is a big parking place. 1. From Rudno polje you best go up by a snowy mountain road to Viševnik ski lift and then continue by the right side of the ski terrain and then by a mountain road further towards the north. You go mostly horizontally till a distinct turn, where you feel that left above a broad valley starts. There is the first trailhead, others are a bit further. 2. Before arriving with car to Rudno polje, you can inspect right if the road to Rupe is cleaned. There's no inscription, but if you drive by that road (first very flat, only at the end some not steep ascent) you can reach its end on the above mentioned mountain road, which comes from the left (Rudno polje). 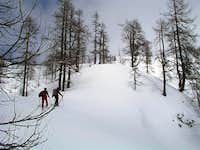 In the valley between Selišnik and Debeli vrh

From the mountain road you deter left (if you came from Rudno polje) and start ascending in the NW direction. There are light woods and only later the broad valley gets steeper, so you need to overcome a valley step. Usually there are tracks, because there people ski down if they do the ski tour through the beautiful Solnice valley. On some 1600 meters of altitude you will already be able to orient. Go towards the very distinct summit of Selišnik, the passage goes by the valley left of it, so between it and the broad SE ridge of Debeli vrh. When you are on an open terrain, keep a bit towards the right, below Debeli vrh, so that you can start ascending its slopes when appropriate. If not, you can also continue by the valley up, almost to the main ridge above Krma, and there turn right on Debeli vrh. The SW slopes of Debeli vrh are a bit steeper, so take care in case of avalanche possibility. The summit of Debeli vrh is immediately above the valley where you came.

You start the tour on the same mountain road, but a bit more eastwards than on the tour #1. If you miss the trailhead, you can correct the route course later. You go again towards the NW, cross the upper mountain road and continue in the same direction. When the woods become steeper (the same valley step as described above) you keep more right. So you reach some 1700 m where nice, but a bit steeper valleys guide you around the broad lower part of Debeli vrh SE ridge. When you gain the ridge on the right, the view on Mrežce south ridg and summit opens. The valley between Mrežce and Debeli vrh is broad in its upper part and quite narrow in the lower part. You are now on the right side of Debeli vrh SE ridge. Turn left and start ascending by the broad slopes up towards the summit. You best go close to the right (eastern) edge of the ridge, between that one and the western one there's a shallow valley. The slopes tpwards the top are very gentle.

3. By the Valley Between Mrežce and Debeli Vrh

You start the tour even more eastwards, close to the parking place on Rupe. The ascent direction is NW again. When you reach the upper road, you go a little left by it, but then soon deter right up. There might be tracks of skiers who come down there, when skiing from Mrežce. Ideally you should soon turn a bit and start ascending in the northern direction. Keep close to the slopes of Mrežce ridge, and when being a bit higher, go into the valley between Mrežce and Debeli Vrh. When in the valley, you can continue up by it almost till the main ridge and there turn left on Debeli vrh, or you can start looking for an ascent possibility towards the left soon. If so, you will reach the SE ridge of Debeli vrh and ascend by it on top.

You can ski down by any ascent route described above. I have tried the first two and they are both very nice. The third one is certainly equally nice above, while below it joins the ski descent from Mrežce, which is also often tried in the recent years.