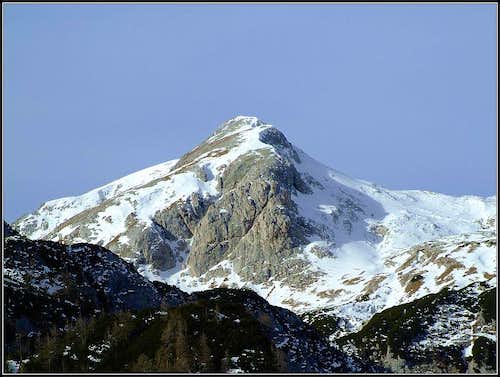 Debeli vrh from the east 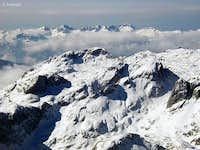 Velebit - Debeli vrh seen from the distance (from Triglav)

Debeli vrh (=Fat Peak) is the king of Bohinj high alpine pastures. Standing north of them, its high, massive posture dominates the high plateau, on the other side there is only a bare, high karst landscape. Being the central figure of Bohinj high mountains, Debeli vrh is also almost the highest there. Only on the very northern edge of the group Vršaki are a few meters higher. The massive character means also a hiking mountain. But the approach to its summit is not just an easy hike. Even the easiest approach from eastern side needs to cross a sharp notch, where on a few meters easy climbing is needed. And also the rest of the ascent needs some carefulness. In optimal conditions from its fore-summit also skiing is possible.

South of Triglav and Kanjavec mountain ridges of high Bohinj summits resemble a big whirlpool. Its centre is behind (north of) Debeli vrh, where a labyrinth of high carst valleys is in summer almost unpassable. Also almost all marked paths avoid this area. Fog here could mean very small chances to get out of troubles. From this area Debeli vrh rises with a short north ridge. Towards north-east Debeli vrh has a short, but steep wall, which is cut by a steep gorge, falling from the notch between the main summit and the fore-summit. Below this wall a round carst basin lies. Towards east from the fore-summit steep rocky and scree slopes are falling down towards Lazovški preval, 1966 m, a high pass between Debeli vrh and the neighbouring summit of Ogradi, 2087 m. Over this high pass the marked path from Laz pasture towards Velo polje pasture goes. Towards south-east Debeli vrh looks like a big shell. These slopes are rocky and grassy, steep, but through the ravine and upper slopes of the shell they say the ascent is also possible, requiring only steep scramble and easy climbing. Finally, towards west the summit has an almost vertical drop, a remote wall, which would require climbing in doubtful rock. South of Debeli vrh there is a beautiful, broad, high alpine pasture, called Laz. Many huts there are now converted in weekend huts, but the general style is preserved.

2. By the north ridge. If coming from north, from Hribarice pass, we must first reach the notch below the N ridge, then by the ridge to the main summit. Easy climb, UIAA I. For tour skiing, see also the description of this tour: Skiing behind Debeli vrh. It describes the wonderful ski tour from Kanjavec, touching also the northern edge below the Debeli vrh.

The mountain is in the Triglav National Parc. In summer, for the road from Voje valley trough Suha valley up to Blato alpine pasture you should pay toll.

In summer and autumn - the best months are July to October. In best conditions you can ski down (steep) from the fore-summit. The best months are March to May. Below Debeli vrh (on the eastern and western side) great ski tours lead from Bohinj to Kanjavec summit. Here is the link to The Route behind Debeli vrh.

The nearest huts are:

Official camping place is in Bohinj valley - here is the link to the tourist web site.