THE SUN was low on the horizon when Erin and I gained the ridge top at Constance Pass. Despite the late hour, we paused for a long time to take in the remarkable view. A breath stopping panorama of the Olympics stretched around us, spiraling out in all directions. Beneath us, the Dosewalips River drainage opened up and dropped for thousands of feet. The faint hiss of the river could be heard from the shaded depths. Directly to the east, Inner Constance brooded like a sentry, its massive spires of basalt thrusting skyward. The breeze was soft and carried the scent I’ve always associated with pure freedom. To the west of us was our objective; Del Monte Ridge. 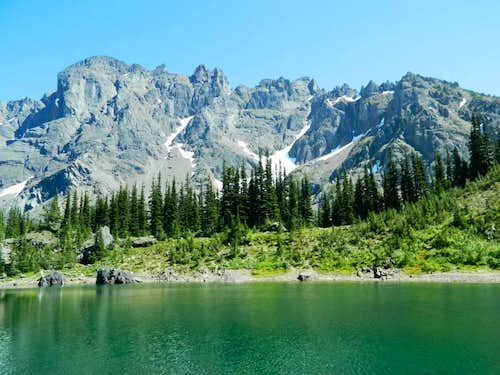 Inner Constance above Home Lake
It had been three years since Erin and I had hiked together and we were happy to join forces once again in the Mountains that we both love so much. She was spending another season as a backcountry ranger in the Staircase district and was kicking of another tour stretch by meeting up with me at Home Lake. I had been exploring the area around the Charlia saddle the past couple of days and only had one night left on my trip. The original plan had been to meet up at Home Lake on the day before I had to hike out simply to spend the afternoon there and catch up on the past three years. The Lake is certainly a beautiful enough setting to encourage lounging around and lingering. I didn’t figure I had much time for any other exploration or adventure anyway, having to hike out early the next morning. Her trip, however, was just getting started. She had plans to head for Deception Basin via Del Monte Ridge. As we sat there on the shore of the lake in the late afternoon shade discussing her plans, the idea came up to climb to the ridge top and scout out her route for the next day. Just a little ways, anyway. The temptation of Del Monte being so close was more than I could resist. I was ready for a little more adventure before it was time to hike out. Plus, I’d never been there. That’s a factor sure to win me over every time.


Del Monte is a long, sweeping ridge that separates the Dosewalips drainage from the Dungeness and Heather Creek country to the north. It received its name from a party of boy scouts trekking through the area in the 1920’s. They named it after the party’s West Indian cook, Billy Del Monte. You might think of the ridge as a kind of conveyor belt, its rounded and easy traveling top leading you on further into more isolated and mysterious high country. It has a vaguely serpentine course, bending slightly north, then west, then back north. The surface encountered is primarily kitty litter scree with little tufts of oat grass poking up. There is very little else in vegetation. It has a scorched, deserty look. The ups and downs are gentle, if one stays along the top, until you get out near the western end in the vicinity of Mt. Mystery. The elevation mostly hovers between 6400 and 6600 feet. Basins and ridges drop away to the north, offering a myriad of options to hike and scramble for the intrepid explorer. It’s possible to stay on the main ridge top, however, until it abuts against the shoulder of Mt. Mystery, where one can gain access to the peak itself, or drop into Deception basin, a strikingly beautiful and isolated glacial cirque. 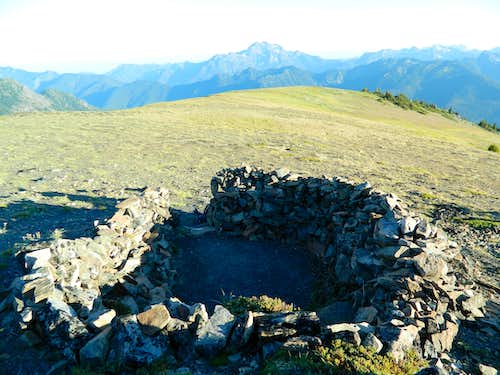 rock structure
It’s hard to pull away from the panorama at the pass, but we do. We sense greater sights ahead, anyway. We follow the trail away from Constance Pass up to a point where it bends southwest and down toward the Dosewalips River. It’s time to leave the path, and we break away, following the crest of Del Monte Ridge. Gaining a little elevation, our vista grows. To the north, the Strait of Juan de Fuca is visible, a deep blue void. Ahead of us are Mt. Mystery and little Mystery, looking jagged and imposing. We come to a flat vantage point, where a structure of rocks is built in a circle, with a gap on the east side to enter. Just beyond it is a smaller structure. The walls are about four feet high, and solid. It is technically Erin’s duty to dismantle any structures found in the backcountry, but this one is so elaborate and well-built that it would take hours to disassemble and scatter the rocks. And besides, we both agreed that was too cool to ruin. She wrote it in her report and we marveled at it instead. After admiring the effort and ingenuity for a while, we push on toward the dropping sun, now sinking between Mt. mystery and little Mystery. Smaller ridges are splitting off of Del Monte to the north and Erin drops down onto one of them to get a closer look into the basin beneath it. Little lakes and tarns shimmer in the growing dusk far below. I explore a bit further out Del Monte. My legs are relishing the easy terrain. I come within sight of a severe looking knife edge ridge that I think would be exhilarating to traverse. I’m a little envious that Erin will be coming out this way tomorrow. Another time, I think. The day is almost gone and it’s a long way back to Home Lake. I retrace my steps to meet up with Erin as she regains the ridge crest. We head back toward Constance pass, our shadows stretching way out ahead of us in the sunset. We pause for a while back at the rock structure and watch the alpenglow alight the peaks. The breeze has picked up a little and we escape it in the shelter for a few minutes before pushing on. As we are getting back to Constance Pass, the light is fading to a dim bluish gray hue. We pause again for a last look at everything before dropping back down to Home Lake. The far ridges and peaks are subdued in the descending evening. The breeze stops for a moment and once again the sound of the Dosewalips River drifts up to us, hissing faintly. A band of pink on the western horizon is diminishing as we watch. I’m very glad I made the trip, even though too short, out Del Monte Ridge. Reluctant to leave, we strap our headlamps on and jog back down the winding path to the lake, where my tortellini dinner and a sound sleep is waiting. 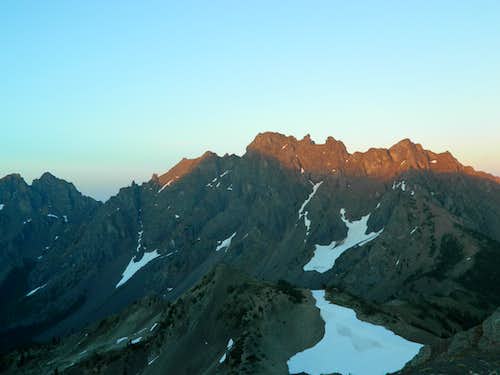 The two principal approaches to Del Monte Ridge are the Dosewalips trailhead and the upper Dungeness trailhead. The trail miles from the Dosewalips approach are about two miles longer, due to the road washout. There is also more elevation to be gained if coming by this way. Park at the road washout and hike to Dose Forks, taking the right branch up the main fork of the river. After one mile, take the signed junction leading up to Constance Pass, which accesses Del Monte Ridge. The upper Dungeness trail (#833) begins in the Buckhorn Wilderness and crosses into the national park approximately 7 miles in, reaching Home Lake around the ten mile mark. From Home Lake, It’s about half a mile up to Constance Pass.


To park at the upper Dungeness trailhead, a forest pass is required. No pass is required to park on the Dosewalips road, but backcountry permits are required if camping in the national park. To obtain a permit visit the W.I.C in Port Angeles or call 360-565-3131