Dent d'Asco or Traunatu is a very characteristic Needle, seen from Asco valley. From the Niolo side it is just a little prominent rock outcrop on the border of the plateau spanned between Cima a i Mori and Bergerie /Bocca Scaffa. From this side the access is easy, albeit long and not straightforward to find. The last hundred vertical meters are scrambling with ten meters UIAA III-.

From Ponte Leccia resp. Corte via D18 or D118 to Castiglione. Sufficient parking possibilities at the entrance of the village or on a small parking below the D-road (signposted). Plan about 1h driving from L'Ile Rousse or Bastia. No public travel.

This Trail is not marked or signed! Traces, Cairns and a good sense of orientation are mandatory. In general, ascend the Terrivola Valley -- problem is, this rocky gorge of the Ruisseau is not very accessible in the lower part. So from the three paths, that leave Castiglione in direction to this valley, follow the middle one: The bottom one descends steeply to the Ruisseau and ends at a (rotten) Bridge. The upper one ascends from the church to a reservoir and will not cross the Ruisseau. The medium continues is almos level to the bridge across Ruisseau Terrivola and then zig-zags one a quite good path in southern direction to the chestnut wood of Paduli.

When crossing the source unter the chestnut trees after about 40-50 minutes you have two options: Either continue S-SO and gain P.1062 from the IGN and join the red-dotted path upwards back into Terrivola valley; or short-cut upwards through the Macchia (N/NE) to gain the ridge of P.1050 and follow this ridge on the southern (left) side to the small pasture at about 1315m, where both options meet again. 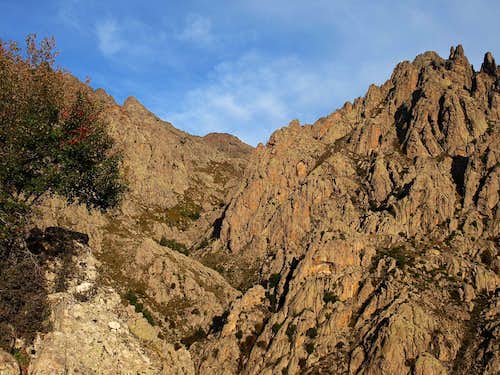 From here, path and direction (into the valley, on the southern flank) are obvious and cairns are found regularly. Impressive view on the pinnacles of Popolascia (right hand side) and Rondinara (left hand side). Wild pigs live here, so be careful!
The path continues with some up&down till Bergerie Scaffa, which is situated below a big, natural roof. 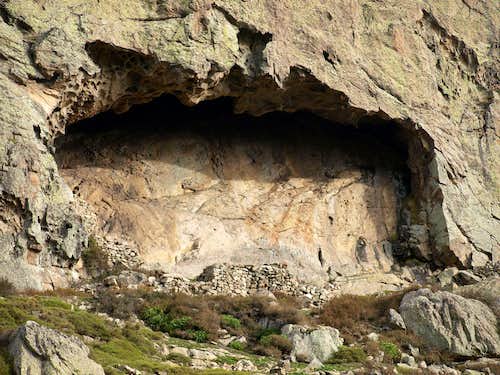 Stay on the (orografical) right side of the creek, until few minutes later the crossing is marked. The terrain becomes more straightforward, as the vegetation decreases to little junipers and similar. To the left now, severeal small rocks mark the Cima ai Mori summit, whereas to the right a large slab indicates the access to Dent d'Asco.
On the right side of this slab, at approx. 1980m height a ramp allows to avoid this slab and gives access to the ridge to be followed northwards. An ante-summit (P.2020) is circumvented nearly horizontally on the eastern side to a col right below Dent d'Asco: 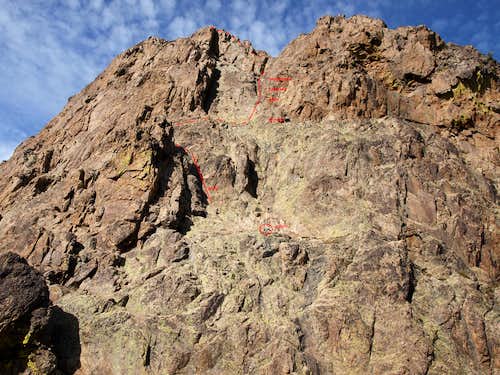 In the middle of the Peak the crux chimney is clearly to be seen; it is gained from the left (cairns) through several gullies to a big ledge (large cairn) and consists of some meters slab climbing with not too much holds and some steeper part, where the sidewalls offer different possibilities for holds and steps. On top of the chimney a 2m-boulder-block is jammed into the chimney and has to be climbed, slightly overhanging but with good holds (UIAA III-). Under this block a fixed rope sling is installed with a maillot rapide for descending. In 2016 the rope was already bleached to white so take care if you want to rappel there or spend a new one (3-4 meters required).
The rest is a piece of cake: The summit arises about 10-15m to the left, just climb the rocks right in front with good holds (UIAA1-2). Don't try to steal away leftwards into the gully as this was far more difficult to escape...

The summit is an flat and broad ridge of about ten meters with a big heap of stones on the one end and some impressive view downwards onto the pinnacles of the "arrete du diable" on the other, which if climbed from Asco is a very demanding and extremly long (think of bivy...) untertaking. Panorama is very informative, as all the inland mountains make up the surrounding "fence" of Dent d'Aso. Neverthelesse the sea lurks across this fence here and there. 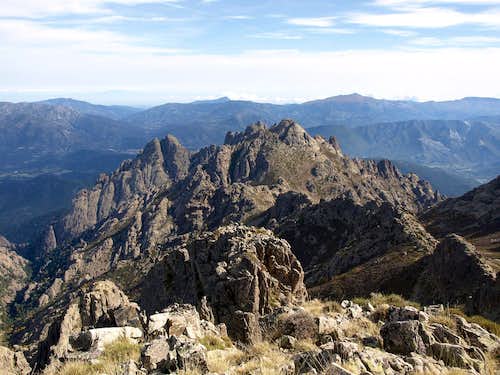 Descend follows the same way; as said a rappel is installed for the chimney, bring about 30 meters of rope (and perhaps substitute the old rope sling). 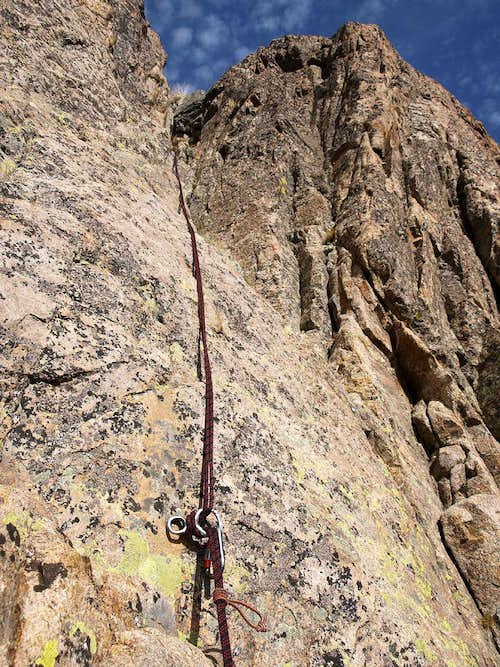 The usual issues in the parc naturel.

As the scramble is south-sided and the rest of the terrain more or less easy, this could even go for a ski tour in winter. Late spring and early autumn are the best season regarding heat versus length of the day; summer is also possible of course, but early start very recommended.

Domaine de Griggionee right after Ponte Leccia and CP Campite above Francardo, both at the Golo River. Some more kilometers away, three to four CPs are found in the lower Asco valley.
One sentence to the "bivy zone" at the Bergerie Scaffa: The "grotto" won't save you bringing a tent, as the roof only shelters the inclined rock slabs and not the leveled area.

Very good trip report to the neightbouring Cima a i mori:
http://paglia.orba.free.fr/gr/gr13mori.htm