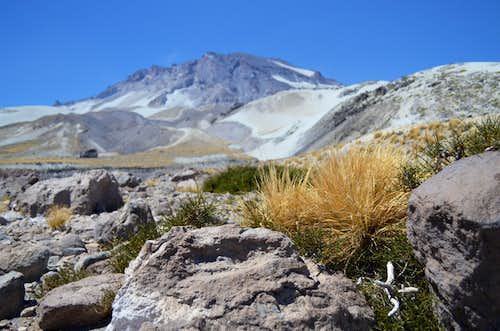 Descabezado Grande
The Descabezado Grande is a stratovolcano in the seventh region of Chile also known as the Maule region. Its height is reported at 3'953m by the Global Volcanism Program and it dominates the panorama seen from the Talca and along the panamericana going south or north from Talca. It is located in the center of a volcanic field that also includes the close by mountains Quizapu and Cerro Azul. Descabezado Grandes last eruption dates back to 1933.
Talca, most likely the local base for the expedition has lost a lot of its early importance when national liberator O'Higgins signed Chile's declaration of independence there. It has lost most of its importance since and has been severely damaged by two major earthquakes in 1928 and, more recently, in 2010.
The Descabezado Grande does not attract large crowds considering the relative ease of getting there. One of the main disadvantages might be that it requires a 2-day approximation hike making the whole trip a 5-day adventure. If in a hurry and very good physical condition the whole trip can be done in 3 days, which would require a very long first and last day with roughly 30km distance and 2000m altitude gain. However, the approximation itself is a very beautiful hike itself, offers fantastic views over the "Valle del Venado" (valley of the game (animals) ) and includes crossing of rivers. With some luck wildlife such as foxes, woodpeckers, lots of lizards, condors and more can be observed.
Depending on the season, ice axe and crampons are necessary. A helmet is recommendable as are gaiters (volcanic ash) and trekking poles. As it is a multi-day trip camping equipment is necessary. Enough water can be found during the trek and on recommended camping sites, so there is no need to carry loads of water. 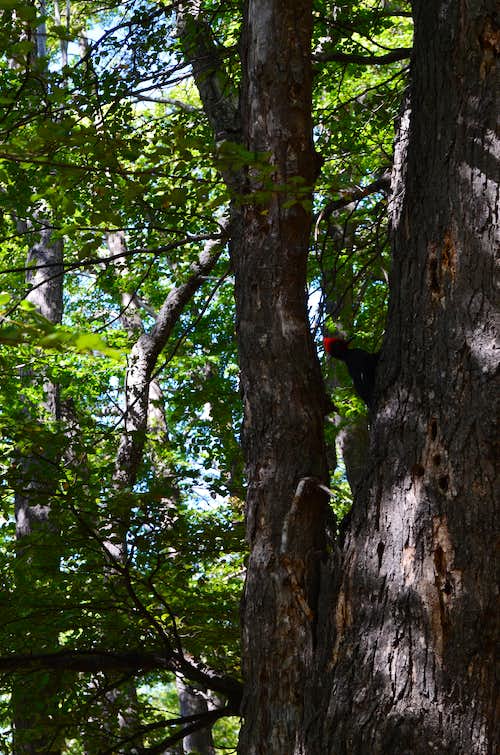 Magellanic Woodpecker in the national park Altos del Lircay.
Take a bus from Santiago to Talca, that is located 255km south of Santiago. The trip should take between 3 and 4 hours cost 5000 Chilean Pesos in Feb 2014 (approximately 10 USD). There are many daily connections from Santiago to Talca, best-known companies include Tur Bus, Condor Bus and JAC. Smaller and local transportation providers are "Talca Paris Londres" and AltasCumbres. Ask for direct connections as some buses have stops on the way and hence take more time.
As Talca is not very interesting from a touristic point of view you might consider leaving directly for the national park "Altos del Lircay" on the same day. In the case of staying in Talca for one night, there is a pension on Cinco Oriente at the crossroad with Uno Norte - private room, shared bathroom for 10'000 CLP (a little less than 20 USD) included a small breakfast. Sadly, I can't remember the name of it.
From Talcas bus terminal transport to Vilches Alto is offered various times a day. The trip takes approximately 2 hours on a (in parts) very dusty gravel road and cost 1600 Chilean Pesos in 2014 (3 USD). The national park is the last stop of the bus, but it never hurts to double check with the driver. From there it is a 2 kilometer walk to the entrance of the national park, where you have to pay 4'000 CLP for the first day (for Chileans 2'000 CLP) and another 2'000 Pesos for every day you intend to stay in the national park. Usually, you cross the park on the first day of the approach and leave it early the second morning and do the same in the reverse direction on the fourth and fifth day, so that would be 6'000 Pesos more (approximately 12 USD). It is mandatory to bring a stove when staying overnight in the park and the rangers might ask you to show them your stove. The rangers are generally very helpful and can explain you the part of the approximation that falls into the park quite accurately. It should be possible to leave some stuff at the entrance with the rangers, however, I did not leave anything there, so I'm not sure if it is an official offer or just courtesy of the ranger on duty. 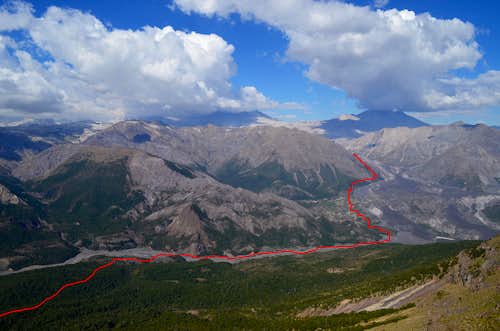 Approximate depiction of the approach to Descabezado Grande as seen from El Ladrillado in the national park Altos del Lircay.
The normal approximation route starts at the entrance of the national park Altos del Lircay and crosses the park to reach the camping site Valle Venado on the edge of the park. On the second day, follow the valley of Rio Blanquillo upwards keeping to the left until a (dry) lake is reached. From there on, Rio Blanquillo has to be crossed three times - once, if you don't mind a short scramble - before reaching the Termas Tibias (lukewarm springs). This is a nice camping site and also has access to potable water. Water from Rio Blanquillo is not considered potable due to its high sulfur content. On the summit day, follow the mostly visible path marked as before by a few stacked stones. Make sure to not miss the left turn early after leaving the camping site, as the better marked path goes straight forward.
After that follow the path that leads slightly to the right of the cone. After some time the mountain gets more inclined and the path gets lost. Just zig-zag up slope consisting of loose rocks and volcanic ash. Looking up there is a big dark reddish rock which is most easily passed on the left. After having passed the rock formation, a big sand/ash slope awaits that is best climbed on the right close to the rocks. A summit cross was installed on the point where one first reaches the rim. Climbing some of the summits must be done with extreme precaution due to loose rocks. From the same point it is possible to descent into the 1.6km crater and explore.
There is an alternative route that needs only one day of approximation. However, getting to the starting point requires a permission of the company ENDESA, that is running a power plant in the valley used for access, and no public transport is available. More information on that route can be found here (in Spanish). 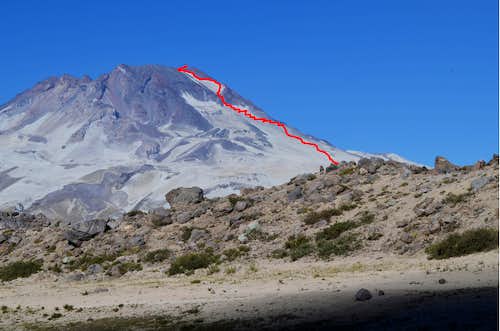 No permits are needed. As you will be crossing a national park as part of the approximation, the entrance fee must be paid and while being in the park follow the rules. That can essentially be reduced to no camping outside of designated camping areas, no open fires and no don't leave any trash. Preferably, keep to the parks rules and avoid open fires at least in (late) summer as the region gets pretty dry.

Best time to climb the mountain is between October to May. In spring (October and November) there is most probably still quite some snow on the path or large parts of it. While in summer it will all melt at some point. In late February 2014 there was no snow on the route, only inside the crater there was some left.

On the first day, the best camping place is "Valle del Venado" that is managed by the rangers and has access to potable water. In addition, toilets and basic showers are available. During the season (late spring and summer) there is a ranger stationed there. Camping and use of toilets and showers is free.
On the second and third day, the "termas tibias" (lukewarm thermal springs) is a good place offering a few camping sites, potable water and on top of that natural tubs with lukewarm water to relax after the ascent.
On the fourth day either the same camping site as on the first night or another camping site (point 6 on the map) is recommendable. Furthermore, there is the possibility of camping close to the waterfall "Vela de la Novia" (spanish for veil of the bride). The latter is not an official camping site, but seems to be used quite frequently and also quite some trash was left. If camping there, try to take some rubbish back to the starting point of the trek, where some trash bins are installed.