Detail of the upper part of... 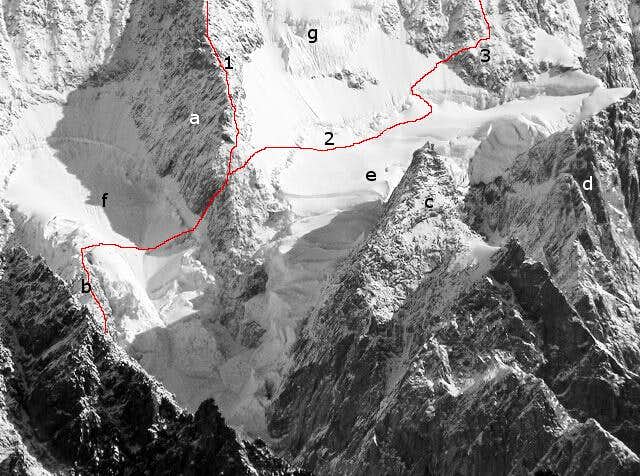 Detail of the upper part of the normal route (both in ascent and descent) of Grandes Jorasses, at the critical Whymper Couloir crossing. The picture was taken in winter - summer conditions are normally far more dry. (a) the Rochers Whymper; (b) the top of the Rochers Du Reposoir; (c) the summit of the Tour Des Jorasses (3813m); (d) the Ghiglione pillar; (e) the upper Jorasses plateau; (f) the Whymper couloir, single most dangerous spot of the route; (g) the "great serac";

(1) the route up the Rocher Whymper and to the Pt. Whymper - the route most commonly used nowadays ;

(2) the traverse of the upper plateau and below the great serac - while easier than the former, is dangerous unless conditions are very cold (usually in early morning)

(3) the climb of the small rock band below Pt. Walker. This is just an approximate line, several variations are possible. (picture courtesy of Antonio Giani)