Devil's Head is one of the more prominent peaks seen from everywhere in the southern Metro Denver area, all the way down to the north end of Colorado Springs.

With 1,248' of prominence, it is also one of Colorado's most prominent peaks.

There is a good history of rock climbing developments along Rampart Range Road and on the Devil's Head massif itself. A good book for climbing in the area is available. Devil's Head Climbing.

See the link below for listed routes in and on Devil's Head.

There is so much camping and hiking available it is almost staggering. Miles and miles and miles of trails exist, although during the summer season you have to share them with motocross bikers and ATV quad riders. This can take some joy from the trails. 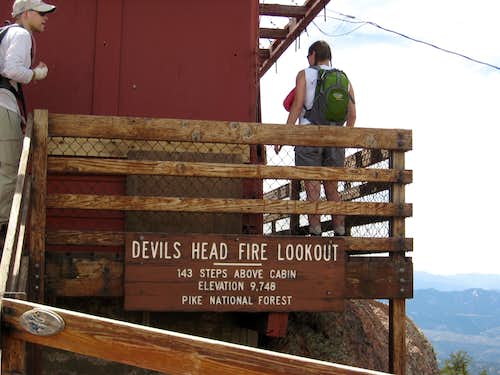 (Courtesy of the Forest Service)

History
The original fire lookout structure was built in 1912. It consisted of a table with a fire-finder bolted to a rock. The location was chosen because of the 360 degree panoramic view it offers of the Pike National Forest. A glass-enclosed lookout was built in 1919, the same that Helen Dowe became the first woman fire lookout ranger in the U.S. Forest Service. The tower was reconstructed in 1951 with the help of 100 men and 72 mules of the 973rd Construction Battalion from Fort Carson.

Devil's Head remains as the last of the eleven original Front Range lookout towers. In 1991, the fire lookout was designated on the National Register of Historic Places.

Operation
When you reach the tower you will immediately become aware of the tremendous vantage point it offers. In fact, on clear days, mountain peaks over 100 miles away are visible. The tower's location is even more significant because of the fact that the area south and west of the tower has a very high frequency of lightning strikes. During a typical summer, we experience from 30 to 40 fires caused by lightning. From the vantage point of the tower, the fire lookout ranger is able to spot these fires very soon after they begin. This enables us to quickly dispatch fire crews to contain the fires. The tower is usually staffed mid-May through mid-September.

Also, keep in mind that the FS rangers actually live up on the summit area for the season in the Private Residence, and are available in the case of emergency, as well has have phones, etc. 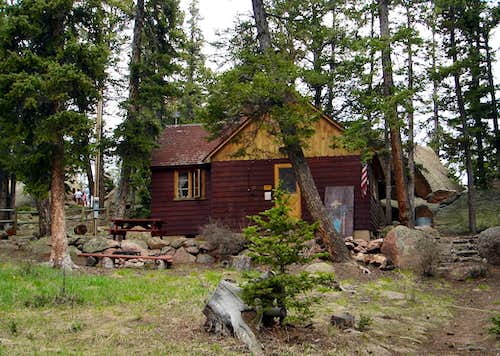 See the link below for more info on the Fire Tower Lookout. 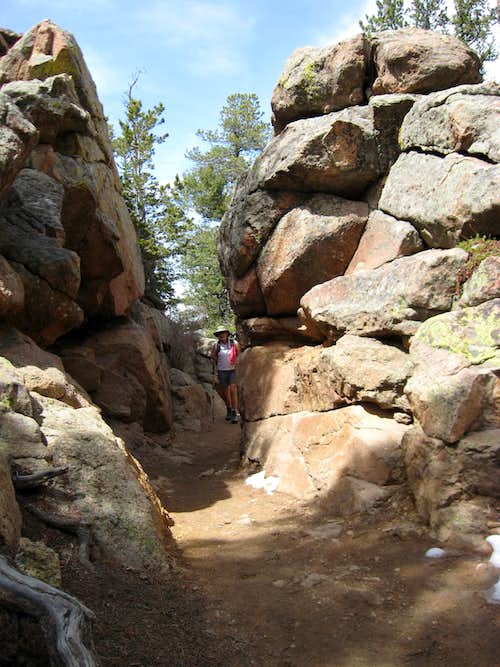 Interesting formations along the way.

Note: parking at the Road Closure near the trailhead right off of Rampart Range Road adds about .5 miles each way, 1 mile RT.

There is also a Zinn Overlook trail, which heads over to the east side of the summit plateau, and provides views of the eastern horizon. They suggest allowing 30 minutes RT for this excursion, with no time for sightseeing.

Shortest distance is to drive Santa Fe (Hwy 85) south from Denver or north from Castle Rock to Sedalia and head west on Hwy 67 until you get to the Rampart Range Road. Head south approximately 7 miles and take the east turn to the Devil's Head Trail Head/parking area. Parking can be extremely limited due to large crowds in the summer season.

Rampart Range Road (and most access, except snowmobile) is closed to all motor vehicle traffic from December 1 until the roads are dry (can be as late as Memorial Day Weekend), but as early as April 1.

Dogs must be on leash.

Motorcycles and bicycles are not permitted on this trail.

Too many spots to list along the Rampart Range Road.

See the camping link below: