With the exception of the confusing NW Ridge Route description, which starts at the normal S Ridge trailhead (??), documented routes to the summit of Diamond Peak on SP all traverse the south (false) summit en route to the main summit. These include the Corrigan Lake/S Ridge Route described by alexr which starts from the Corrigan Lake trailhead but which, although detail is lacking, seems to traverse northeast all the way across the mountain to meet the Pioneer Gulch/Southwest Ridge Route at the false summit, or possibly earlier.

Studying the map shows two roughly parallel features, both of which can be correctly described as SW ridges. The route from Pioneer Gulch takes the more southerly of these and goes up to the false summit and subsequently north to the main summit. The second, more northerly feature is best approached directly from Corrigan Lake and leads to a col from which the main summit lies to the southeast.

To avoid confusion and because it’s a more northerly feature, we refer to our route as the “Upper SW Ridge Route”. Some trail is involved as far as Corrigan Lake but thereafter it’s strictly cross country travel for which you’ll need to call on your GPS and/or compass. There are, however, signs of travel in the form of the occasional boot-path and cairn. I hesitate to call it a bushwhack, since the terrain is almost completely open. Perhaps B0-B1 on the Vancouver Island bush scale.

Total return distance is approximately 15 km. The route involves a total of about 1,200 metres of relief and takes 8-9 hours on the OFS (old fart scale).

Approach directions are mostly as described in the other route pages except for the turn off to the Corrigan Lake trailhead but are reproduced here for the convenience of the reader. 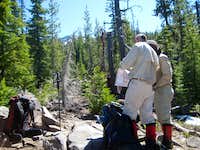 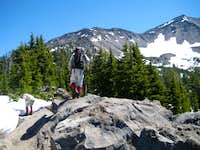 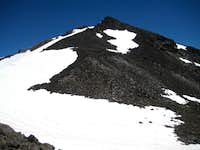 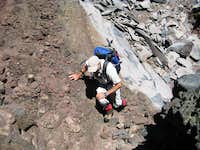 Scrambling the upper ridge
From the Corrigan Lake trailhead follow the switchbacks 2 km and up to the lake. At the first signposted junction follow the direction to “Diamond Peak”. At the second go left for “Pioneer Gulch”.

At first the ridge is a mix of jack pine and scree but you’re soon high enough that the vegetation thins out enough to enable you to choose easy going in the open on rock or on (seasonal) snow if you don’t mind side-hilling on the white stuff.

Proceed NE up the ridge until what seem to be the summit appears, with a double topped bump to its left. The latter is the top of the NW ridge (and makes you wonder why – or if – that page author approached this from the standard S Ridge access). Between the double bump and the main summit is the col you’re aiming for. Carry on NE until you can swing around to the east under the summit of the double bump and then SE down into the col at N43 31.374 W122 09.257.

Climb scree on the right of the ridge crest or snow on the left and up to the high point above. Once there you discover that it’s not the actual summit. This lies a further 150 metres to the east. Scramble down to the ridge crest with a little Class 3 and walk up to the real summit in 5 minutes or less. If seasonal snow cover is present, watch for cornices on the north side of the crest.

Reverse the foregoing to return to your vehicle. As the attached tracklog illustrates we took a more direct route down to the Pioneer Gulch trail from the point at which we accessed the upper SW Ridge.

Just an axe if you decide to travel on snow in early season.

Don't forget the deet. The mosquitoes on this one were the worst in my experience, bar none! 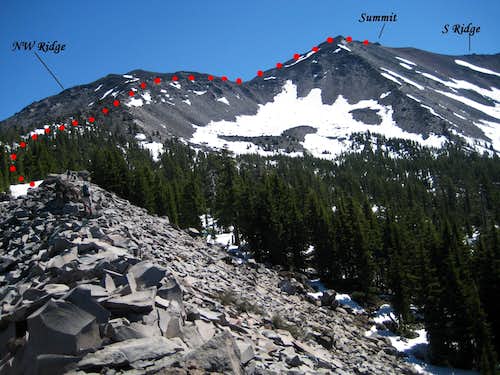 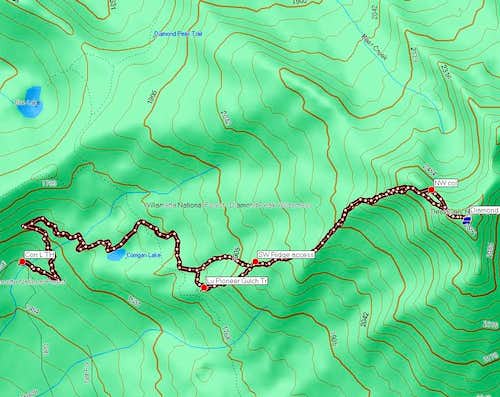