Diamond Peak is a mid-elevation mountain located at the eastern side of Washington near the Idaho state border. Although near popular recreational areas such as adjacent Petit Lake (WA) or Priest Lake (ID), the peak is seldom visited by hikers. Most people visiting Diamond Peak are hunters and people interested in seeing historic fire lookout sites.

The peak has great views from its summit and is easily hiked. The approach roads to the trailhead are accessible by most passenger vehicles. The summit can be reached via a walk up an abandoned and partially overgrown access road, although occasionally intermixed with small fallen trees and branches. 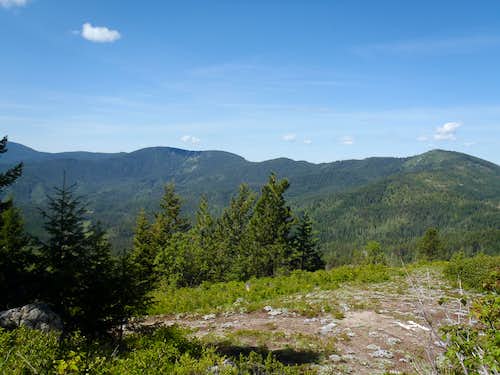 Diamond Peak has two lookout sites that might have interest to some people. During 1934, a 50' tall L-4 pole lookout tower was constructed at the true summit. The tower was eventually destroyed, and some of the only remnants remaining at the site are concrete stairs and foundations. An open, level area adjacent to the summit used to be a helipad and is represented by a large "H" comprised of white-colored rocks. 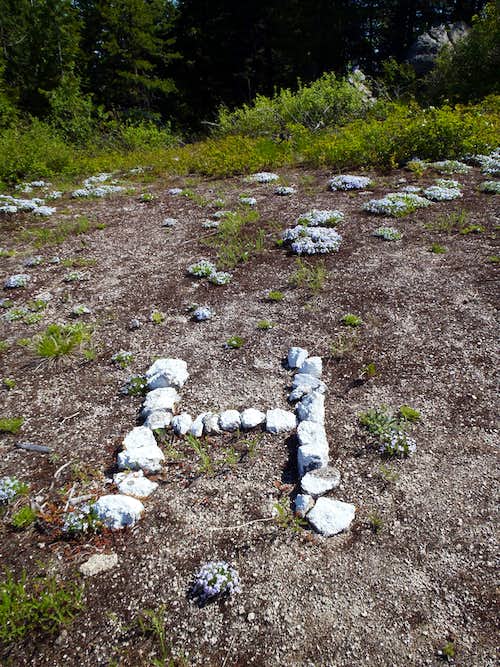 In addition to the summit lookout tower, a wooden patrol tower was constructed approximately 0.8 miles away along the east ridge of the peak. For many years, some resources showed misleading or missing information regarding the exact whereabouts of the Diamond Peak Patrol Tower. In one example, one source claimed the site was at Point 4413 of the east ridge (when in fact it on an east-facing slope at least 0.2 miles further away on a nearby minor hill along the same ridge). During the Autumn of 2014, such resources have gradually changed the location reference to "east of" Point 4413. The exact directions and coordinates of the Diamond Peak Patrol Tower are shown in the "Route" section below. 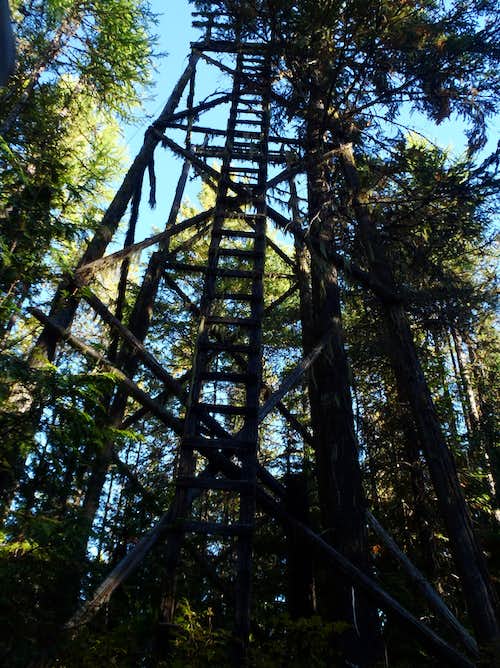 The patrol tower was abandoned during the 1960s but its remnants are still there. Some people question whether the Diamond Peak Patrol Tower should be included on a list of standing lookouts. It is in a state of disrepair, and looks more like something straight out of Robinson Crusoe or Gilligan's Island than a fire lookout. It has a very similar appearance (albeit on a taller scale) to the Ned Hill Lookout located on the Olympic Peninsula (on the other side of the state), which some people also question an inclusion on any "standing" lookout list. Regardless of any list criteria, the Diamond Peak Patrol Tower is a nice piece of history worth seeing if given the opportunity to do so. 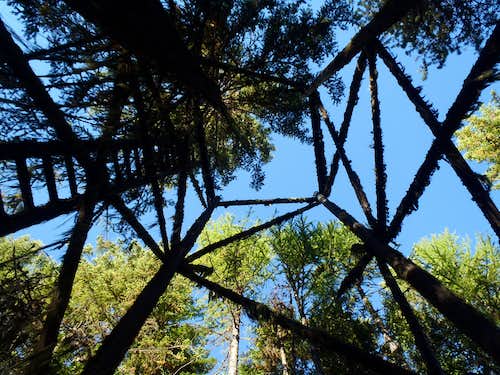 In fact, of major lists and resources dedicated only to lookouts still standing at their officially used locations, not one of them included the Diamond Peak Patrol Tower site until after it appeared on the Washington Lookouts list maintained by SP member gimpilator during the Summer of 2014. During the Autumn of 2014, after learning verification of the tower's existence from the forementioned list as well as people such as SP member Redwic, some resources started adding the site to their lists of lookouts still standing at their officially used locations.

The quickest and easiest way to drive to the peak is from Idaho Highway 57 near Priest Lake and the town of Nordman.

2) After 2.3 miles, the road is bermed and the main road now turns right (north). There will be a sign stating "Petit Lake - 9 Miles" or something similar.

3) After 1.8 miles, a well-graded road (possibly unmarked/unsigned) appears on the left while FR-1362 continues north. Turn left at this junction.

4) Continue driving along the well-graded road for approximately 6.7 miles, until reaching a triangular-shaped road junction at a saddle. Veer/turn right onto FR-311, towards Petit Lake.

5) After 0.3 miles, find a gated abandoned road on the right while the mainroad continues to the left of it. Park at this junction, making certain not to block the gate or road access. 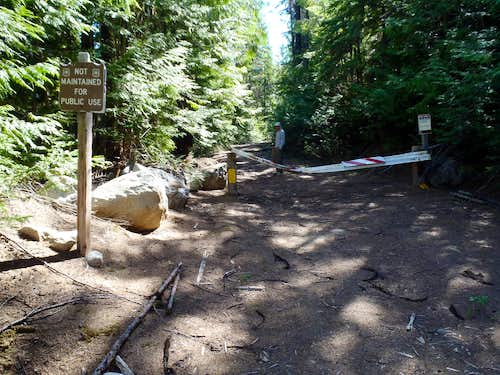 IF WANTING TO VISIT THE SUMMIT:

2) After one mile, there is a three-way road junction. Turn right (south), heading uphill. This road is shown on some maps as FR-657A.


IF WANTING TO VISIT THE DIAMOND PEAK PATROL TOWER SITE:

For many years, some resources and people have had misleading or missing information regarding the exact whereabouts of the Diamond Peak Patrol Tower, implying it is at Point 4413 of the east ridge, when in fact it on an east-facing slope at least 0.2 miles further along the ridgeline. During the Autumn of 2014, those resources have gradually changed the location reference to "east of" Point 4413. The exact directions and coordinates of the Diamond Peak Patrol Tower are shown below.

2) After 0.2 miles, the road bends left. Leave the road and start hiking through the forest. Look for an old, overgrown, abandoned trail; this will make the effort much easier to traverse the ridgeline.

4) Continue heading east, entering a thick forest. The ridge drops a little and then goes uphill again. As the trail/ridge is about to head downhill again, approximately 0.2 miles from Point 4413 and 0.8 miles from the true summit of Diamond Peak, look to the right side (south side of trail). The Diamond Peak Patrol Tower site is located on the slope between the 4320'-4360' contours on topographic maps.

HIKING STATISTICS: 0.8 miles one-way from summit with 80' of gain (eastbound only).

Diamond Peak and the surrounding area is typically accessible from late May through late October.

Petit Lake has primitive campgrounds and campsites, as well.