Dicks Peak is a fairly straightforward hike from either the Bayview or Emerald Bay trailheads, but there isn't much information about the actual NE ridge out there. I've been up to the NE Ridge a couple of times, so I figured I'd add more information and photos for anyone who's interested in the hike (it's a great hike). The first time, I did this hike solo and didn't make it to the top due to the route choice on the NE Ridge and time pressure. This time, I made it up with my buddy Rafee.
We hiked from the Bayview TH to Dicks Pass in about two and a half hours. From Dicks Pass we followed the PCT down for a few minutes and then left it to take the use trail that leads to the NE ridge of Dicks Peak. It's worthwhile to take your time on this use trail because it's easy to lose and it's a much harder hike if you end up on the loose uncompressed talus that surrounds it. After about fifteen minutes, we made it to the saddle between a small peaklet and the NE Ridge of Dicks Peak. This is where there are several ascent options, which range from a walk up to a climb.

Dicks NE Ridge - Route options
Two years before, I attempted to go straight up the ridge. This quickly becomes a class 4 climb. The class 2 route follows a steep chute up to the left of the ridge. The chute is large and obvious when viewed while approaching. Once you start up the NE ridge from the saddle, follow the use trail around to the left. If you follow it all the way, it will deposit you at the bottom of the chute.

Dicks NE Ridge - Chute
The chute is maybe 200-300 feet tall, is very steep, and has very loose rock. Rafee and I ascended it slowly, sticking together and at some points, alternating to avoid kicking rocks onto each other. If you have a group of 2 or more, loose rock falling down the chute onto hikers below will be an issue. There are three places in the chute where you'll need to do a small scramble to get over a rock, but these moves are all easy. We topped out after about 15 minutes in the chute and continued the hike up the ridge to the summit. 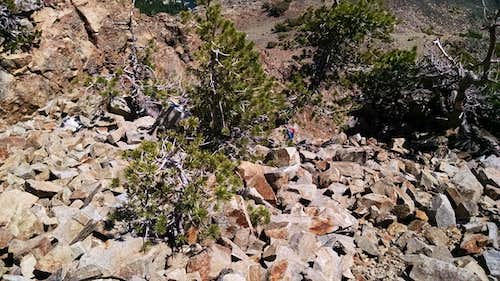 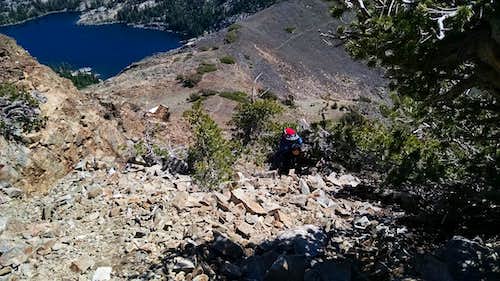 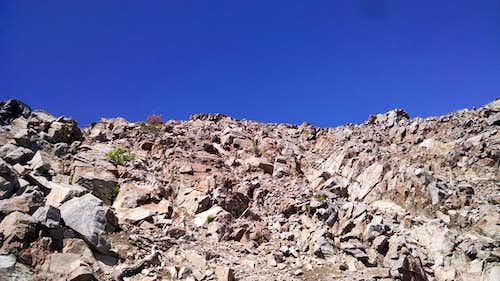 Dicks NE Ridge - Above the chute
Interestingly, this is not the easiest way up Dicks Peak from Dicks Pass or Dicks Lake for that matter. It's easier to go up the North Face. From a distance it looks like the face would be a nightmare because it's a giant talus slope. But, there are many use trails of compacted talus going pretty much from the bottom all the way up to the top. Rafee and I descended this face and did a 5 minute traverse across the talus to get back to the base of the NE Ridge because we thought it was safer than descending the chute. For a giant talus slope, it was actually a pleasant descent and it also showed that there are other ways to get up Dicks. For example, it would be fairly straightforward to hike up around the right side of Dicks Lake from its outlet and get to the base of the north face and then hike up the north face, bypassing the excursion to Dicks Pass entirely.
When we got back to the bottom of the NE Ridge we ran into some backpackers who wanted to go up Dicks and then traverse over to Jacks Peak. They were planning on going up the NE Ridge. We recommended against doing that because the chute is so steep. I wouldn't go up it with a full pack. Instead we suggested they go up the north face.