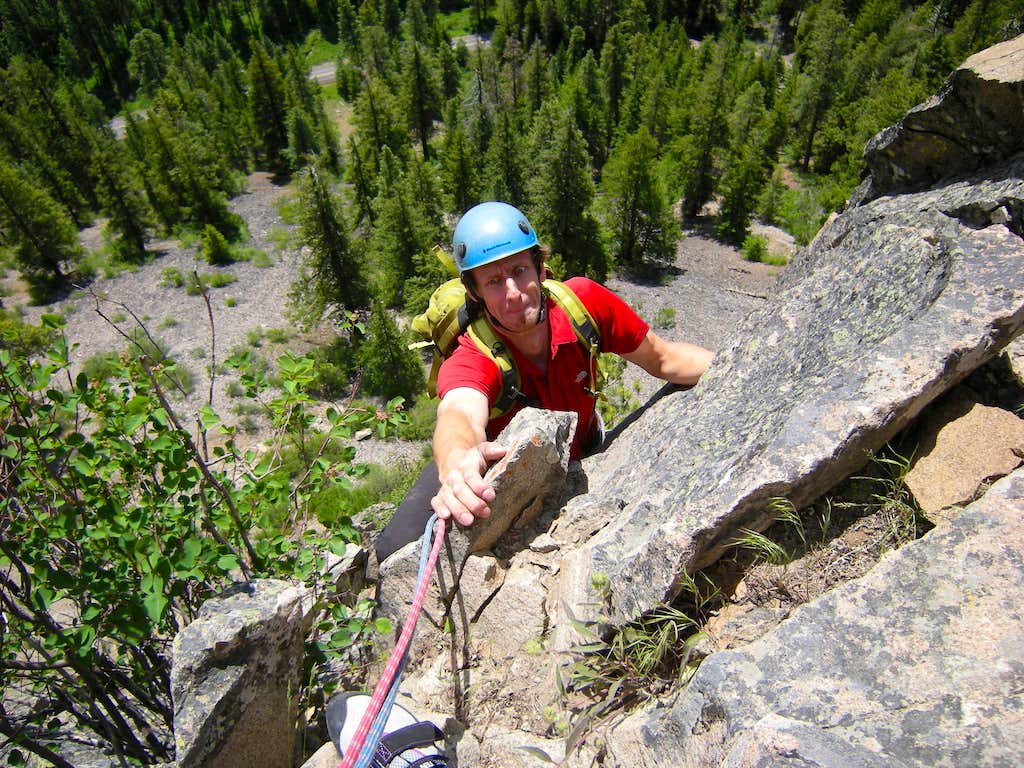 Reaching for yet another modular hold on the ultraclassic (in name anyway) Dirty Sanchez (7P, 5.8) route on Goose Egg Mountain (May 2009).
« PREV NEXT »

Sanchez! :) hehehehe - yes, it was as good of a climb as it sounds, but goddamn -- what a name!!
thanks for the visit Steve.

No doubt about it.

thanks for visiting Courtney!

I just zoomed in on your face.

What kind of expression is that?
Looks like you have a "Fred Beckey" kind
of look going on there ???

You can never be so sure with some of that
andesite lava stuff - looks challenging!

"What kind of expression is that?"
Expression of one about to be on the receiving side of a D.S. perhaps :) heheheheh

Reading Larry and Radek's banter, I knew the title would give Radek some heat but I didnt think Larry would be the one bringing it! LOL

Thanks! the name really is the only thing this line has going for it (IMHO).

I thought Beckey described this as Class 4 !!!

"Located about 3/4-mile to the NW of Kloochman Rock, composed of TWO prominent basalt rock masses, a denuded intrusive plug
of andesite. It has an interesting
accumulation of moraine till 'plastered'
against the west flank."

Is it fair to say that the "denuded intrusive
plug" is synonymous with the so-called
Dirty Sanchez that you speak of ???

Geez - WHY do I feel like running to the
bathroom and washin' my hands right now?

inspection of your facial expression,
(IMHO), I have to conclude that it resembles
that of the famous dream stalker "Freddy
Krueger" in that awesome cult (horror) classic:

too many bad jokes running through my head. Great photo and route choice.

Yes - I add this one to my personal collection of anoos themed routes, such as Rim Job etc..
:)

There's also the memorable Kazakh route "You telling me the man who try to put a rubber fist in my anoos was a homosexual?"

is a great facial expression! Cool photo. Bummer on the route quality.

thanks Martin - by the same token I like your current profile shot too heheheh :)