Dix Mountain's Buttress Slide: A Monster on the Mountain

The Buttress Slide was created in 2011 the southwest buttress of Dix within a stone’s throw of Hunters Pass Slide. Rich McKenna and I climbed it in August of 2012 as part of a multi-slide dayhike. This time I spent considerably more time on it with Phil Brown and Nangaparbat. There’s no slide that quite compares with this backcountry monster, as NP referred to it. It’s one of the steepest slides in the Adirondacks and truly bridges the gap between scrambling and technical climbing.

Mosaic of the Buttress Slide with Approximate Route 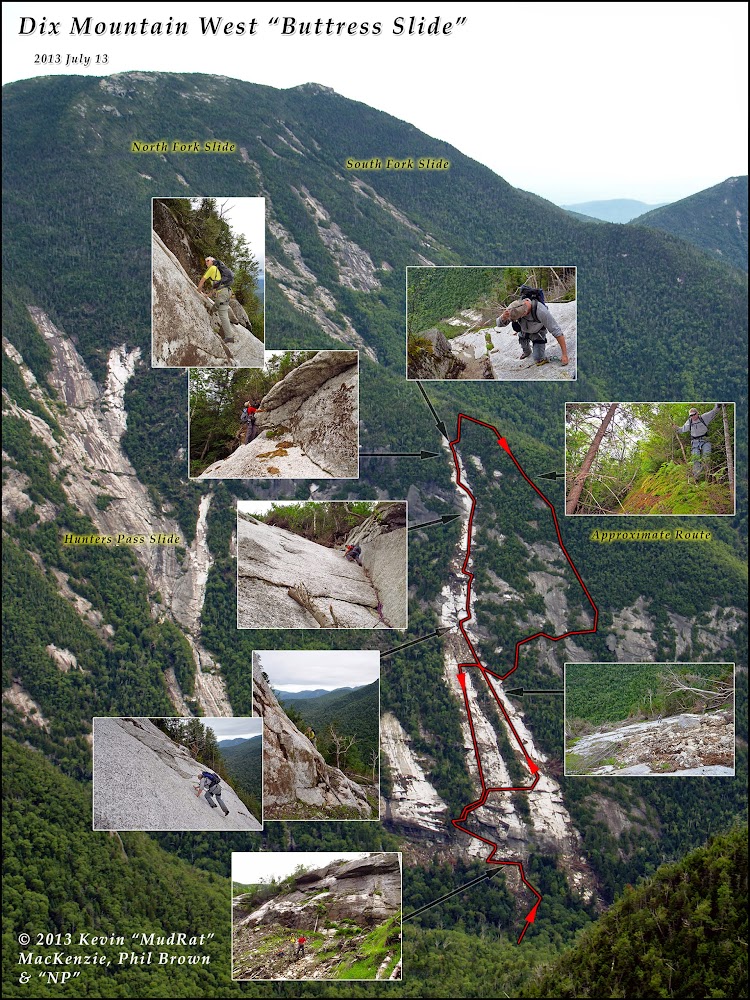 After a quick cup of tea at the Noonmark Restaurant, Phil and I drove to Elk Lake trailhead and met NP. 8:10 a.m. found us setting a good pace toward Hunters Pass…with NP in lead by a good distance. We kept waiting for the sun to break through to no avail. Overcast skies kept it cool and ensured the sun wouldn’t bake us on the slide. Hunters Pass Slide was also in the itinerary, but circumstances removed that off the docket later in the day.

A quick refill of water at the drainage from the Nippletop’s flank found us at the Buttress at around 11:00 a.m. An easy walk to the base leads to the first of many “problems” to solve. The first is obvious—a cliff rises almost 100 feet. At the top sit the twin overhangs. The woods to the north are an easy solution, just walk left along the base and bushwhack far enough to access a small adjacent slide; cross it to a narrow strip of woods before the Buttress. We spent over an hour exploring other options, however.

Phil brought rope, cams and nuts so we donned harnesses and got down to business. Several ramps lead to a debris covered ledge about 1/3 of the way up the wall. I belayed Phil as he set protection and tried to climb up the right-hand side of a huge gap between two overhangs. The right-hand corner was filled with moss and mud. After an hour and for safety reasons, he descended and left a couple cams to protect himself on the way down; we’d have to retrieve later in the day. The forecast of sun turned into  a light drizzle that disappeared as fast as it materialized.

Once off belay we climbed up to NP via a debris covered ramp that led to a set of wet mossy ledges. This was basically fourth class climbing to a bunch of trees just left of the overhang. The ledges weren’t steep, but they were wet and we were high above the ground. Again, the woods to the north would have saved time with an exposure-free access route. The real climbing begins about 450 feet up from the base, however. 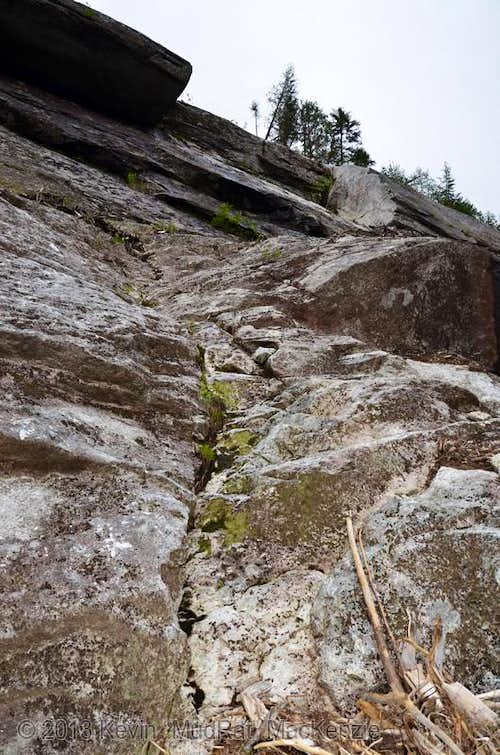 One possible line on the footwall of the Buttress Slide.

A small buttress of anorthosite sits atop the northern run just above the overhands. Debris covers much of the area, but the slope is more typical of a slide in this location. We stayed well back from the edge--a slip would land us at the base of the aforementioned cliff. I explored the northern tributary last year so we cut through the thin strip of trees to the southern run. They join a few hundred feet higher so from a distance the slide looks like a wishbone (to use NP’s words). Open slab and a bit of debris then leads to the fifth-class section.


A crack looks tempting as it leans to the left and dissects the slide for the first hundred or so feet. I used it last year in combination with some adjacent slab. The result was a gnarly climb with mud thrown into the equation. We climbed to the right of the fracture on pure friction using several traverses to access the best lines. The slope decreases a bit higher atop a large ledge…the perfect place to soak in the surroundings. Hunters Pass Slide sits partially in view to the north while Nippletop’s flank sprawls away and up to the northwest. The clouds clung heavily to its summit. 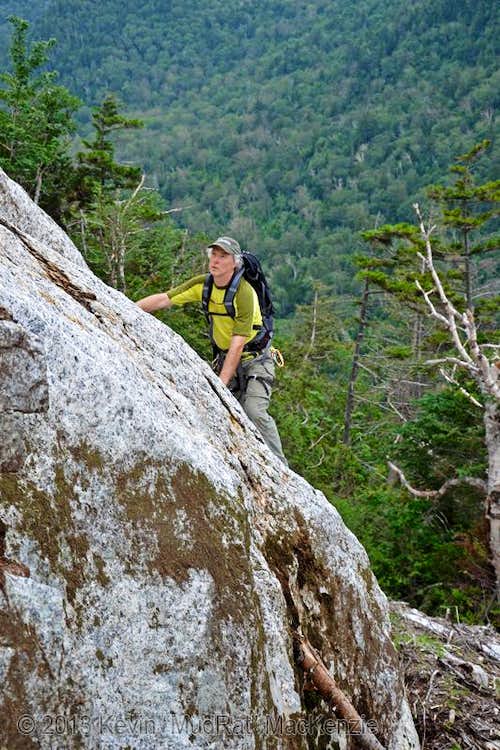 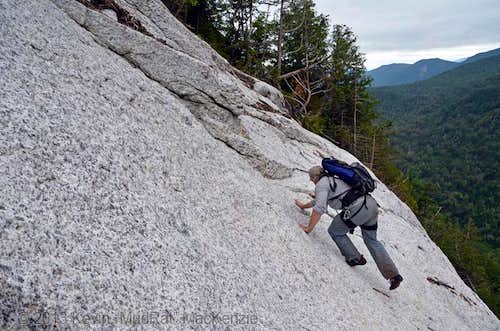 NP climbs the first serious pitches on the upper half of Dix Buttress Slide.

The crux of the climb, a 100’ hand crack (dihedral) looms above. Ledges on the right-hand side form a thick wall with various fractures splitting the stone. NP asked if he’d be comfortable climbing this unroped. I didn’t think he would, so I tied clipped rope to my waist, grabbed a couple slings and soloed the pitch. It felt familiar from last year: stem it here, use the crack a bit higher, rest on a little jug of stone etc. The slope briefly decreases to about 45 degrees about 80 feet up before what I consider the crux. An overlap of wet seeping stone allowed me to cling underneath the stone while slowly traversing left. I felt the lack of protection behind as I frictioned up to a small ledge with a boulder to which I could anchor. I was at the end of my rope, so to speak. The slide continued much higher, but I’d belay from here.

NP climbed cleanly up to me ignoring the spot at which I traversed—there’s usually more than one way to skin a cat. Phil did the same clearing a few small trees and a loose rock en route. We watched it tumble down several hundred feet to rest at the low-angle slab. NP and Phil climbed above, expecting the slide to end soon after (or so I was told). It does not. It’s about this time that you truly realize that this slide is a beast.

An exposed move led around a ledge and up more steep friction climbing. The mental focus became tiring by this point: a personal indicator that I needed fuel. NP was perched a bit higher taking photos, so I decided to rest near the side and photograph Phil’s ascent. Another climb up good anorthosite, overlaps and flakes leads to the capstone ledge. A final sketchy move around a small roof leads to the top of the slide--the place it all began during Tropical Storm Irene. The exposed traverse was wet from seepage, so we actually exited onto a small ledge to the right where we had a much needed break. The protective woods surrounded me reassuringly. It was time for lunch—which I’d left 800 feet below (roll eyes). 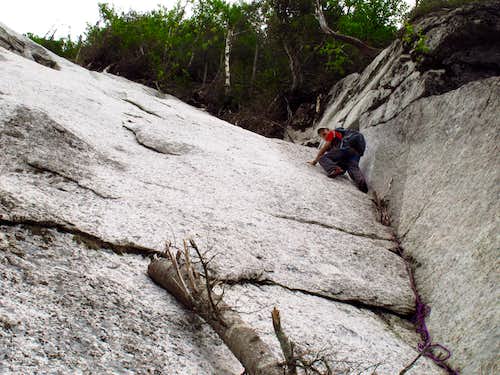 Rich and decided on a creative exit in 2012 by cresting the ridge, wading through the deadfall and descending to the drainage of the North Fork Slide. I’d pondered other options for over a year in hopes of finding a more direct bushwhack. Yes, with a long enough rope and the right protection, one could rappel the slide, but I wanted to find a non-technical route. Thus we climbed the remaining ledges in the woods, descended the ridge and climbed down on a track  slightly off parallel to the slide—erring to the left to avoid a multitude of old exposures. It took an hour to weave through the ledges in the steep forest even with gravity doing much of the work. Every so often I navigated to the top of a ledge to survey our progress. If I saw exposed stone, I’d led us left. I also watched the slope of the slide (segments can be seen from the ledges). We didn’t want to exit prematurely. The top of the low-angled slab seemed most prudent as an exit.

Near the end of the bushwhack as the slope of the ridge decreased, we redirected right and skirted a couple old slides before exiting on the southern track Buttress Slide once again. Crossing over to the northern tributary, we descended to the lip of the footwall for the next phase of the day.

Phil still had two cams set in cracks in the right-hand corner between the overhangs. He set up an anchor so I could belay him over the edge to retrieve them. This went off without a hitch. As the time passed the five o’clock hour, he completed the task and we descended via the wet mossy ledges to the base: one last exposed set of moves. As we repacked our bags, curiosity got the best of me and I ran over to the north side of the runout, up through the woods(mentioned above) to scout an access route via the woods.

Until walking back to Phil and NP, I’d managed to get through the day without mishap. As I re-crossed the drainage to Phil and NP, I stepped on a rock, perhaps 200 pounds. It moved and broke out of the dirt as I slid off trying to keep out of its way. As it rolled over my ankle, I felt the bones flex. Thankfully, no harm was done except a few scrapes, but it was a last reminder that it’s not over until it’s over. The backcountry is a wild unpredictable place…but that’s why I go there.

Climbing the Buttress Slide a second time was as exciting as the first. We later discussed the technical rating and estimated the rating to be around 5.4 during the upper half of the climb. Similarities to a couple portions of Upper Wolfjaw’s White Slide jumped to mind as NP and I discussed it. That, however exposed, isn’t as sustained. I can’t emphasize enough that as beautiful as this is, it is also unforgiving during much of the ascent.
Thanks to both Phil and NP for the great company and safe day! 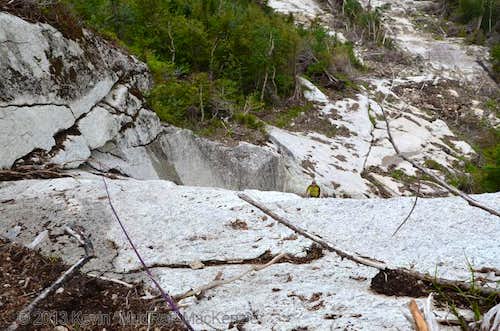 Kevin getting ready to belay Phil Brown and NP on Dix Buttress Slide. 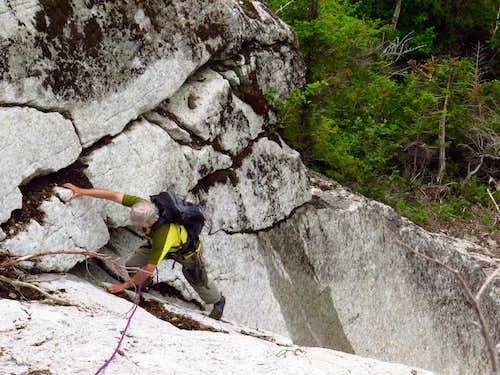 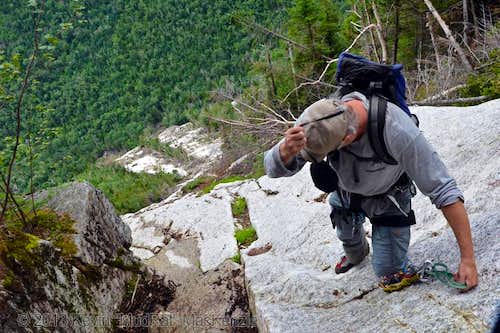 As a Vermonter stuck in Texas for the past 20 years your pictures and descriptions of scrambling up slides, new or old, bring back a flood of memories. Sounds like you had a great time.

Re: Brings Back Memories

I'm happy to stir up those type of memories. Sounds like you need a visit back east!!! Thanks for replying, Lou.
best,
kevin

It will be a long time if I ever get out East to climb anything, but that's okay with so much to do out West. Still, I enjoyed taking a look at this report. You did a very professional job with it- video, the poster, all of it.

I appreciate the compliment, thank you.
Yes, the West has some epic climbing for sure. Someday, perhaps, I'll be able to get out there and experience some for myself. Happy climbing.

As long as you love your own backyard, there is no reason to spend big bucks to fly far away, I think.