Introduction, quotes and little about Duchess 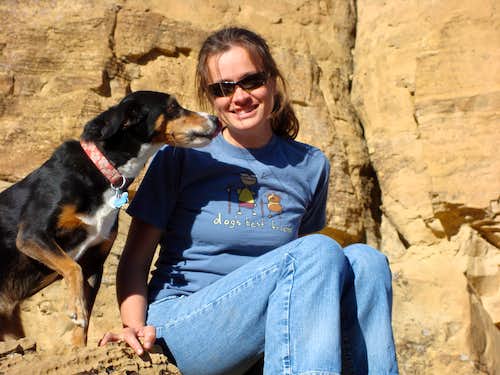 yes, Duchess, I am your best friend (please note my T-shirt)
Duchess was adopted from an animal shelter. I knew immediately she was the right one. We went by maybe 50 canine cages, but she caught my eye, and I was not interested in meeting any other dog. She was about 6-7 months old. She was most likely abused and showed a little stress incontinence when men approached her. And she was so sweet.
The better I get to know men, the more I find myself loving dogs. Charles de Gaulle

Can she be a vegetarian? I never liked meat and my son decided not to eat meat for the love of animals. So, we attempted, but it did not work out. People who met Duchess know she ate like a royalty. Dog food was not her thing. She wanted to eat what we ate. I tried some vegetarian meals, but when during one of our morning runs I noticed a tail of some rodent sticking out of her mouth and then heard the crunchy sounds she made when eating that poor creature, I realized it will not work out. I was nauseated. So, I started to buy her steaks, organic chickens, salmons and sushi - oh, she loved sushi. I would even order steaks in restaurants for her.

“Ever consider what our dog must think of us? I mean, here we come back from grocery store with the most amazing haul, chicken, pork, half a cow. They must think we’re the greatest hunters on earth.   Anne Tyler 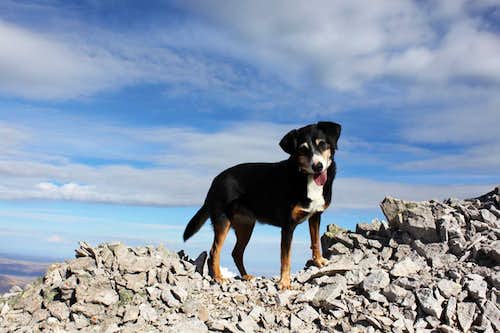 My best hiking buddy
Our early trips were small hikes and we both were becoming gradually braver and braver and were reaching for higher summits. She was my running partner during my marathon years and was able to run 50-70 miles weekly. She mountain biked with me and she back country skied with me. She gave me bravery on my first trips to Colorado Mountains. I am not sure if I would be able to reach the summits without her. We spent many nights out alone, but we were not alone - we had each other.

Dogs are minor angels, and I don’t mean that facetiously. They love unconditionally, forgive immediately, are the truest of friends, willing to do anything that makes us happy, etcetera. If we attributed some of those qualities to a person we would say they are special. If they had ALL of them, we would call them angelic. But because it’s “only” a dog, we dismiss them as sweet or funny but little more. However when you think about it, what are the things that we most like in another human being? Many times those qualities are seen in our dogs every single day - we’re just so used to them that we pay no attention.” Jonathan Carroll

The 14ers dog. Duchess had developed a reputation. She was a great scramble dog and summited 45 Colorado peaks over 14,000 feet in elevation (Mt. Sneffels was her favorite with 4 summits). Some 14ers I did not try to take her on, e.g. Capitol (she just camped with me below), some we were not allowed to go to, e.g. Long's Peak because of its location inside Rocky Mountain National Park and "no pets allowed" within national park boundary. Culebra Peak is located on private property and they also do not allow dogs. She loved reaching the summits. Duchess also summited many 13ers and lower peaks. She hiked canyon lands of Utah and deserts of New Mexico. She visited many states, from New Mexico, Colorado, Arizona, Nevada (yes, she went to Vegas), California, Utah, Wyoming, Montana, South Dakota, and Texas. She was even across the border in Mexico. She travelled well.

A dog will teach you unconditional love. If you can have that in your life, things won't be too bad. Robert Wagner 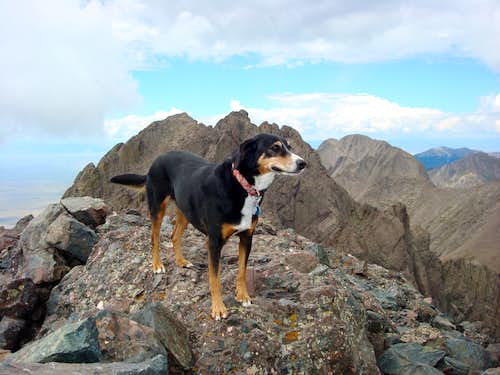 Duchess on the top of Crestone Needle, Colorado
Little History: Dogs were the first thing humans domesticated - before any plant, before any other animal. The origin of domestication is not clear, some say up to 30,000 years ago. That is a long, long time ago…Some wonder whether we domesticated dogs, or whether they domesticated us. Some theories claim that early wolf like canines approached us first while they were scavenging around garbage on the edge of human settlements. The animals that were bold but aggressive would have been killed, and the animals that were bold and friendly would have been tolerated. And now our dogs came onto our sofas and beds, and some are obese and lazy, and suffer same conditions as humans do…

“Dog’s lives are too short. Their only fault, really.” 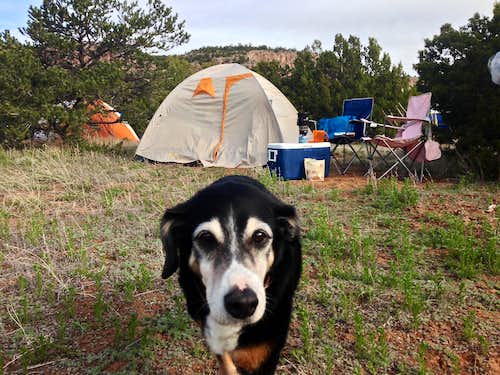 Thank you for your comments on Duchess's last trip photo. I really appreciate it. Many of us have dogs and fear when the moment comes, but as long as we remember them waiting for us and being happy, we should believe we meet them again…

If interested in reading about domestication of dogs - click here. And briefly they come from a sister branch of wolves, not directly from wolves.

testimonial to your amazing four-legged friend, immortalized in so many photos!
I would just call your attention to the fact that the quote about getting to love dogs more the more you learn about humans has been attributed to Frederick the Great of Prussia (1712-1786), perhaps de Gaulle was just quoting him?
My own favourite quote about dogs is,"If you pick up a starving dog and make him prosperous, he will not bite you. This is the principal difference between a dog and a man" (Found in a book on computers with no source given.)

thanks… quote - well, got it from internet, it sounds right the Charles de Gaulle would cite Frederick the Great.

Dogs really do have KIND hearts.

Their bond with the hearts of humans is quite amazingly beyond words ... but I do remember what a famous "dog musher" told me while visiting a friend in Alaska:

"Gliding along a moonlit path, we move with grace and authority as a single unit bound by the age-old bond of love and respect between humanity and dog." At loss for words!

All I know is that I cried more for my dog after she passed than I did for my mother, and I loved my mother. I am so sorry for your loss, and thank you for this great tribute to her.

Re: At loss for words!

Marc, I feel the same. I lost my mom and cried tons, I cannot almost function now… I hear Duchess in the house… thank you.

Re: At loss for words!

You are a very strong person. You will get through this, Liba.


(If Grateful Dead did it, you can too!)

Thank you for sharing. Great tribute to your lost friend! We have been through this three times with our pups. Things will get better! Hang in there!

What a touching piece...

...and beautiful memorial to your best friend.
I too have a 4 legged best friend and so I have read this and other bits you have posted about her with interest. Considering her humble origins you gave her a wonderful life - and wherever she is now, I'm sure her tail will still be wagging.
This time last year I thought we were about to lose our golden retriever to a heart condition. But slowly he has rallied - and is climbing mountains again, albeit very tiny ones compared to your Duchess. You just have to take each day with them as it comes - and be grateful. As your article says - that's the one thing they are bad at: being around for long enough.
Best wishes, Mark

Re: What a touching piece...

thank you… good luck and health with your retriever….

This is the best post you've ever submitted, and you've submitted many excellent posts. I hope you treasure the memories of Duchess forever.

Liba, maybe i previously told you, i don't remember...anyhow ten years ago I also had two tailed friends, two huskies, female and male, mother and son, which climbed mountains with me and my companion. We always slept in a tent before climb. Great adventures! It was wonderful to climb with them, but not only to climb, i remember with joy also the little things of life!
Thank you very much for this memory. Best wishes, Silvia

I was quite touched by the image of Duchess you built here! Her adventurous spirit lives on :)
I have a dog here in London and regret not being able to take it with myself when I go hiking, because that's truly an experience a dog lives for. You were a great friend to your dog, to show it the world like this!

Remember when Baxter (I) was put down and I held him during his last breaths... I am sorry....

There is some interesting research coming out using MRI's looking at brain stimulation in dogs. Apparently dogs are more excited in general to see their owners than other dogs....

Liba,
That was a very moving and lovely tribute to Duchess. Such an accomplished dog. When I go back up some of the mountains I had climbed with Sopris it is hard to not feel that we are closer up there. And that she is watching me as I descend. May you take some comfort in always being watched over.
Best regards,
Jon Bradford

Marley, our Kelpie, will still be with us for a short time, but probably made her last mountain trip this weekend and her last hike a couple of weeks before that. Her buddy, the yellow lab, is waning quickly, but still able to impress me with his endurance at times. Sorry for your loss and thanks for the heartfelt tribute!

She was a part of SP and your adventures. She's probably climbed more peaks than most people on this site! I will miss your pics of her and you on your latest adventures.

Thinking of you and your boy. The sun will rise again and maybe there will be another doggy who can climb with you guys!

Hugs to you both!