Doggone it! "I felt proud to be your friend !" 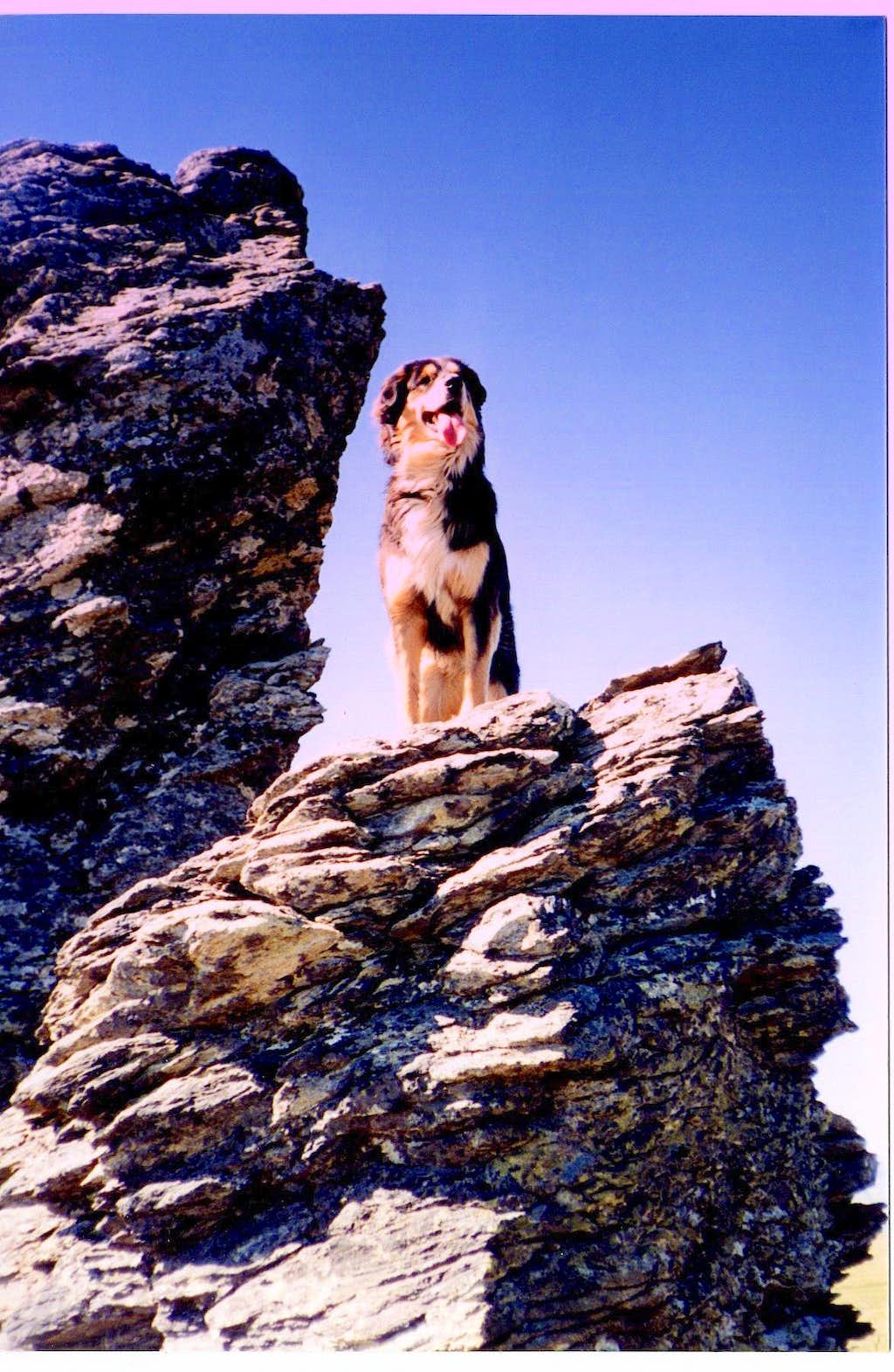 ">
Jasmin, The Wonder-Dog (1992-2006)
When I was visiting a friend in western Alaska in 1996, this dog saved my life. Jasmin was a water dog and snow lover. She liked to chase everything that moved, including people on X-country skis. On one such ski outing, a terrible wind and ensuing blizzard came upon us. The wind blew my right mitten clear off, exposing my fingers to the bitter elements. But then, a SMILE quickly came to my face. There was Jasmin, holding something inside her mouth. It was my mitten that I had given up for lost. Yes, I loved Jasmin. If you had been there on that cold Alaskan afternoon in March, you would have loved Jasmin, too !!! Jasmin isn't with us anymore. But in a way, I KNOW she's still out there, because I always hear her barking whenever a cold wind blows. [Photo taken March 1996, east of Nome near the Bering Sea.]
« PREV NEXT »

That's a real rock-and-dog pic! Plus that lovely smile!

"Why are there so many
Songs about rainbows?
And what's on the other side?
Rainbows are visions,
But only illusions -
And rainbows have nothing to hide.
So we've been told & some chose to
Believe it,
But I know they're wrong wait and see ..."

Yeah, what a friendly rainbow wonder-dog pic! A gray, greenish and black and white musical rainbow against the great blue skies. Plus a spicy drop of red! :)))
BTW Do you mean it's worth talking to the wind as - despite the wind not hearing - a friend may so you can even hear some reply/barking:) from the other end of the/Other-world???

Some people believe that when dogs travel to
the other side, SOME of them are completely
overwhelmed by what they see, and manage to
make their way BACK to earth as "shape-shifters."

Well, we can't rule out part of the barking being mine: I'm able to bark (which you realize:)) as well as sing (out of tune only:(); and I do sometimes hum for joy, i.e. bark to the wind, especially while biking, my friend…

Aren't people a bit like sheep, "mimicking"
(or following) what they see (or hear) in Society ?

No doubt most people are sheeple :), which often makes Big Good Wolves howl :))
BTW If you haven't read Never Cry Wolf, it's a must read!!!

Yes, it was my FAVORITE book when I was out
wandering around on the tundra in western
Alaska! Wish I could do a repeat !!!

So you have! Well, then you do realize that howling and barking being brought by the wind may be about you :)

YES. But, it seems there's a much "higher force" out there that could knock me off my
feet & blow me away into another (the next?) world if it wanted to. Love your comments, Jacek !!! : )))

Well, if you ask me Larry, personally I'm positive man's not the highest force in the universe, let alone outside it :)

and very touching text. I am sure she must have felt very loved and had a happy life too!

I keep hearing that dogs have spirits, and
spirits MUST have a home somewhere.

I suppose that's up for debate, but I DO
know that Jasmin had a very wonderful life!!!

What happened to that box of tissue ??

and thank you for not painting that wonderful dog red. I always appreciate your commentary but this was one of the best, a nice story.

I think your story is better than any Lassie episode I ever saw! I agree with Dean, thank you for not painting Jasmin red ( ;
Lovely photo, Larry!

I was in the process of painting the photo
pink, but I rescinded my decision at the last minute.

My wife & I went out in the desert, and I
think we have "flower photos" comin' soon !!!

Dogs are so faithful when you know them, and so knowing when you don't.

Amazing fact: Dogs are the only animal species known to eye-follow. Apes do not.

Re: A wonderful encounter

Geez, Ray! I got a bloody tear falling down
my cheek from what you said!

Yes, Jasmin was all of that, and more.

She would always follow me with her eyes, and
captivate my heart when I was not looking.

I was very fortunate to have known this dog!!