Fletcher Jordan and his friend Rob invited me to join them on the Bachelor Creek/Itswoot ridge route. We decided to forgo a tent to save weight given the mild temperatures, a theme I had practiced many times already this year. The Downey Creek trail was in good shape with only a few small sections of brush. The day was pleasant until we reached Bachelor Creek. Bachelor Creek trail started out decently as well up to 3500'. We encountered a couple women who were porting some gear left from the scene of an accident on Dome a week earlier. They gave a nearly perfect description of how the rest of the trail would go: Heavy brush, cross creek at 4100 (bad advice BTW), more heavy brush, swamp, down trees, burn area, meadows, steep drop to Cub Lake and then up. Not long after our chat we bumped into two older gents who had just done Sinister which completed their 99th and 98th Bulgers. The glacier was apparently all beat up with an open bergshrund that they had to climb through. They made it sound reasonable but my guess is once you've done that many it's difficult to be phased by anything. We were thinking of possibly adding Sinister but after their account we dropped that idea. Within minutes the trail got super brushy. We filled up on water at our creek crossing. An F-18 buzzed us after crossing it. Heat of the day made the climb into alpine territory very difficult for me until around 5500'. The 700' drop to Cub lake was also unpleasant. We took a break here and briefly considered camping lower but Fletcher had us charge on up the ridge. Once on Itswoot Ridge, bugs were plentiful as was full moon light. We saw nobody else on the mountain. 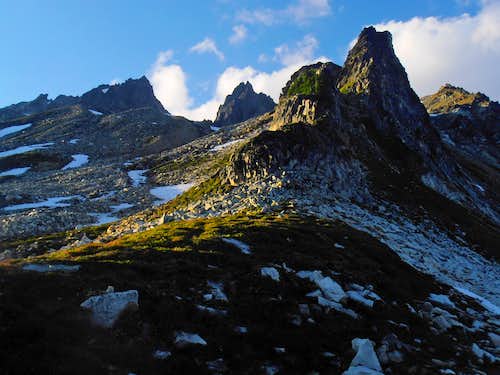 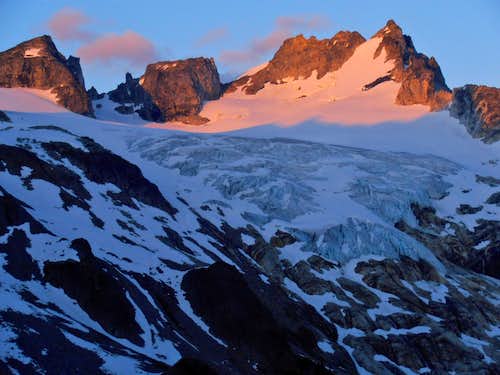 On summit day we took our time to get up. We had a late start of about 7am. We debated for a while which entry point to gain the upper bench leading to the glacier and finally figured out we were all pointing to the same one. The trail was very idyllic for being un-maintained but it did have some small sections where rockfall had taken it out. A couple marmots were whistling right on the route near where we started into a snowy gully that was beginning to melt out. This took us up to the high bench that met with the glacier. We spent a little time to snack, refill water, go over some travel basics and rope up. The glacier was inactive on route so we never had to make any critical decisions but tried to stay high on its edge.

The col between Dome and Chikamin Glaciers was a neat view and spot to break. We found some stuff left by a previous party and briefly reconsidered Sinister. We dropped rope here and continued the last snow ramp to the scramble. The vantage point confirmed for us that Sinister would be too time-consuming so we continued on for Dome. The final rock is very exposed but easy scrambling. Nobody could agree who would climb the final rock which was understandable considering the penalty for falling. I explored its SE base thoroughly on class 3 ledges for an alternative option but everything looked 5th class. So after Fletcher had a few false starts where he would get up a couple moves then back off and say "I don't know man..." I set a couple pickets in ice to protect the ending. I knew he was the better climber but it was time to get it rolling so I manned up and led the ending, my first alpine lead. Once on top I belayed Fletcher and Rob up and we celebrated this hard earned peak. Amazing scenery! Best Washington bulger yet. After enough time had passed I belayed them back down and we slogged back to camp. Once past the glacier the snow was the perfect consistency for boot skiing. That evening we hiked up along one of the creeks coming from a basin below Spire Point to get a look at the view in full moon light for a bonus 1k feet. 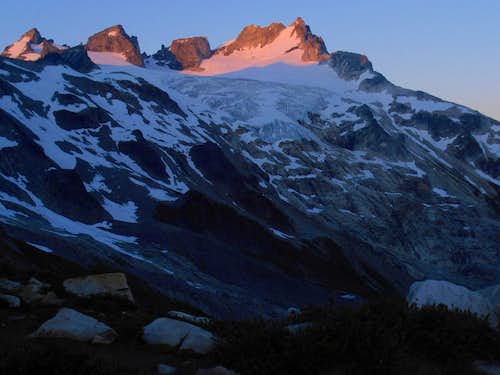 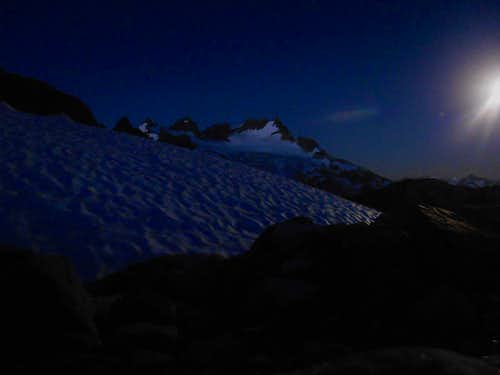 Leaving Dome and Dunking in the River

The next morning we left early to beat the heat. At around 4,600' we decided to cross Bachelor Creek and stayed on it's East side in easy woods completely bypassing the junky brush from the first day. We did push a couple hundred feet down-hill into some slide alder to re-connect with the trail but it was considerably easier. We pounded the trail and made it to Downey Creek before it began to really heat up. At the junction I took a longer break than the others and got behind. But after 1 mile it became unbearably hot and I didn't see them until the car. There were moments I feared I would pass out. I was fairly certain this was the hottest day of the year. I would push more water, soak my shirt/de-layer until I made it to the base of Downy Mountain which is a carpet of green moss. From there I knew I'd make it. We hung out at the Sauk River later to cool off. After about an hour of napping and reducing body temps we drove down 530 towards home. This is where Fletcher kept noticing pullouts with cars parked on the side of the road and said, "dude, how much do you wanna bet they're jumping in the river?" So at the next pullout we joined the crowd and found a sweet spot with a rope-swing, old bridge and stagnant current on the Stillaguamish. I started to climb the rope tree and then the height had my knees shaking. Of course Fletcher egged me on, "Dude, you just climbed Dome Peak, this's nothing! You got this!" I looked down at the gnarled tangled mess of wooden spears, grabbed hold of the rope and swung out, careful to let go at maximum swing. A loud smack highlighted my first ever river-jump-from-a-rope-swing. The exhilaration had me wondering why none of my other hiking partners did this. We continued by jumping from the bridge and watching others best each other before heading back. All-in-all the best trip of the year so far and very memorable. I'm grateful to have partners willing to have a good time in the mountains.

Passed out on the Sauk

For another perspective (and better photos), check out Fletcher's excellent trip report:http://www.nwhikers.net/forums/viewtopic.php?t=8017041

Especially loved the video and great shots of the final climb to the summit. Great effort, huge reward. Hope the day comes when i too can slide my rear end across that exposed crest!

Thanks! Aside from the heat, it was really fun. Now that Summer is over I can say it really was the best trip.