Dr. John Roper at the summit... 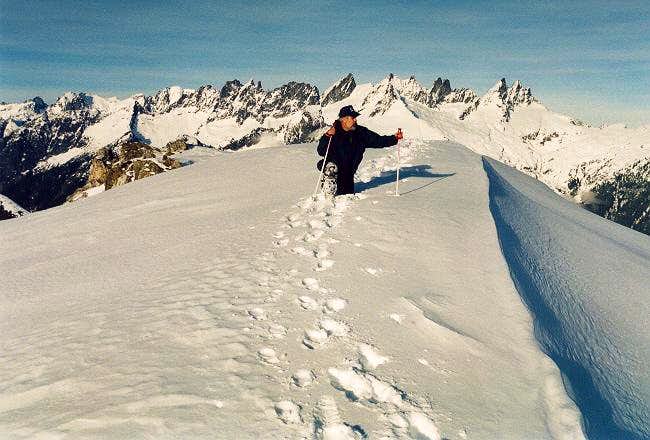 Dr. John Roper at the summit of Trappers Peak 2.5 miles southeast of Mt. Triumph on December 23, 2004. I think he said this was his 3rd winter ascent of the peak and 20th overall, but first time up in 20 years (or maybe first winter ascent in 20 years). John grew up in nearby Newhalem so this peak was in his backyard. In fact, from the summit, you can see the town to the ESE over a mile below. Behind him are the Southern Pickets. He has climbed every single one of those picket points. Directly over his head is the highest point of the Southern Pickets.
« PREV NEXT »

....did he forget to bring the snowshoes on this one?

John doesn't need snowshoes, he can just about walk on water. Good to see a pic of one of the north cascade legends out doing his thing. Neat pic Paul.

He's still got power. I only just barely made it up there before him. :-)

Brian: I had him kneel so he wouldn't block the backdrop. I agree it looks funny. But then any guy who'd climb with pink-handled ski poles looks funny.

Speaking of backdrop, if you want to know what everything is back here, click here. You won't regret it.

Hey cool! Paul, was this your first outing with John? Was it just the two of you? Great shots, and gorgeous day!

Mssrs. Beckey and McKay did not go much beyond the trail. Only John and I went to the summit.

There was another pano (the zoomed out version) that I forgot to add to the caption. Thanks for reminding me.

So now you have Roper kneeling when you tell him too? Damn!

And good weather in the North Cascades-in winter? Lucky you.