Just to the north of impressive Dragon Peak along the Sierra Crest, is an interesting rock tower locally known as “Dragon Tooth”. Extending to the east just north of this tower is a 3/4 mile long ridge of bumps and gaps that culminates in Peak 3877 m. This peak (shown on the old 15' topo map as Peak 12720+ feet) is unofficially known as "Dragon Jaw Peak".
“Dragon Jaw Peak” is the highpoint of a complex of ridges and canyons that includes Kearsarge Peak which is actually more than a hundred feet lower than “Dragon Jaw”, though the former is much more massive and isolated. Between Kearsarge Peak and "Dragon Jaw Peak" is the deep gap known as Lilley Pass- named after the legendary peak bagger, Barbara Lilley. North of the peak is the remote austere canyon of Oak Creek's south fork. To the south, are the much more frequently traveled branches of Independence Creek with its scenic lakes and the popular Onion Valley trailhead. East of "Dragon Jaw", barren Sardine Canyon drops dramatically- nearly 9,000 feet- to the desert of the Owens Valley.


Due to "Dragon Jaw's" location just east of the Sierra Crest, the view is varied and quite interesting. It's true that some distant views in certain directions are blocked by the proximity of a few higher peaks such as Dragon Peak or Black Mountain, but that's okay. These impressive peaks serve to enhance the view and are well worth gazing at from this great view point.

"Dragon Jaw Peak" has a prominence of between 330 feet (converted to feet from 100 meters on the newer metric based maps) and 480 feet (based on contours shown on the older 15' maps).

Most climbers will likely start from the popular trailhead in Onion Valley, though it wouldn't be unusual to access this peak from the Sardine Canyon trail- especially during winter months. Even approaching from the South Fork of Oak Creek wouldn't be out of the question for those of us who enjoy some solitude and a bit more challenge. I'm pretty sure that most will want to climb "Dragon Jaw Peak" along with Kearsarge Peak since both peaks are easily accessible from Lilley Pass. 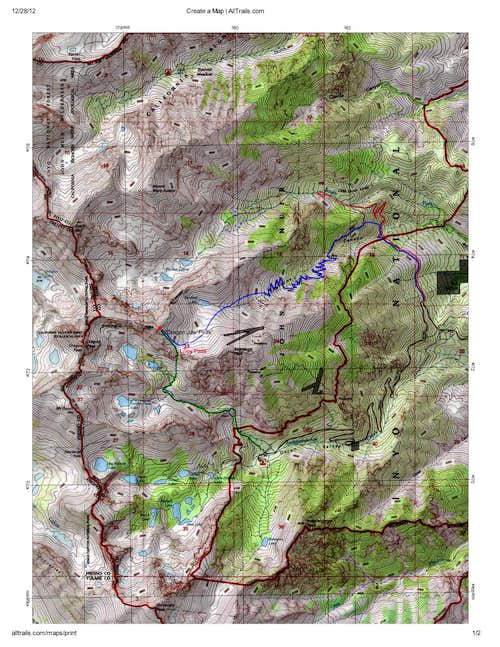 From the town of Independence on the floor of the Owens Valley, follow the signed road west toward Onion Valley. The road ends at the trailhead after traveling about 14 to 15 miles and climbing more than 5000 feet.


From the road end, locate the trail that goes north from the parking lot. It may be signed for Golden Trout Lake. Follow the trail north past a rather nice waterfall. After about 2 miles, you should see Lilley Pass rising up to the north. Leave the trail at about 11,200 feet and climb the short steep class 2 chute to the top of the pass.


Via Sardine Canyon
Total Round Trip: About 13.0 miles with about 5600 feet of elevation gain.

This route starts from the northern most switchback along Onion Valley Road at approximately 7,100 feet. An old mining road is followed as it contours north towards the creek in Sardine Canyon. Watch for a use trail (seen in satellite views) heading west up the steep slope just north of the creek to eliminate about 1.0 miles of switchbacks. Don't worry- there are many more switchbacks to climb as one continues up the canyon along the road. Eventually, according to the topo map, at about 10,200 feet, the road veers to the south to its mine destination and the climber is left with finding his or her own cross country route past Sardine Lake and eventually to Lilley Pass. It's worth noting that on the satellite view, the remnants of an old trail seems to continue toward Sardine Lake past the abandoned mine. This is not shown on the map.

Note that this route is considerably shorter during the winter months or for those who decide to eschew the endless switchbacks of the road altogether. About six miles round trip can be eliminated by hiking directly up the canyon cross country.

Via the South Fork of Oak Creek
Total Round Trip: Approximately 11.0 miles with an elevation gain of about 5600 feet.

This mostly cross country route begins on the same road described above in the Sardine Canyon route. Simply stay on the road as it zigzags across a low divide to enter the drainage of Oak Creek. Old maps show a trail that follows the canyon up to Parker Lakes, but I haven't found much evidence of this from the satellite view. Those who hike up this canyon will likely do a lot of cross country work to reach Parker Lakes and the base of the north slopes of "Dragon Jaw Peak". (Sounds like 'fun' to me!) 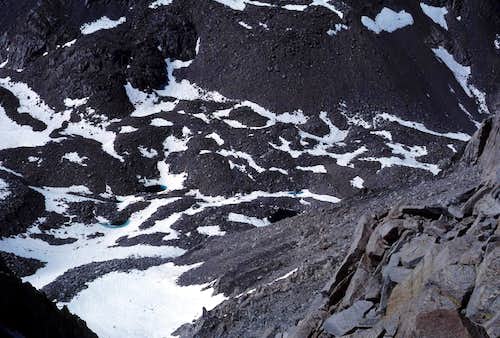 The easiest route is up the east slope from Lilley Pass- class 2 with a class 3 summit block that may add a bit of spice to your climb. I don't think the summit rocks are particularly difficult, but I do remember having some concern about the precariousness and the moderate exposure involved with reaching the highest point.
There may be some class 2-3 routes from the Parker Lakes area on the north slopes. From a distance this looks pretty steep and loose.

A traverse of the west ridge from the Dragon Pass area looks pretty interesting. It appears that most difficulties along this route can be bypassed by dropping down on either the north or south sides of the ridge as necessary. But... don't take my word for it. This looks like it may be worth exploring. :-)


You can pick up your Wilderness Permits at:

"Dragon Jaw Peak" is on the southern boundary of the Mt. Baxter California Bighorn Sheep Zoological Area. As far as I can determine, it appears that all seasonal travel restrictions for this region have been suspended. If your plans include Oak Creek, you may want to check with a ranger to confirm this.

Note that climbing "Dragon Jaw Peak"- even when combined with an ascent of Kearsarge Peak can be done as a day hike by those who are in reasonably good shape. But, there will surely be those who can't resist the lure of camping and fishing near one of the beautiful lakes in the basin at the foot of Dragon Peak.

The regulations for camping in this region seem pretty universal for much of the Sierra Nevada:

Summer is the most common time for this peak, but a winter or spring ascent would probably be more desirable for those who have the experience- especially if one plans on approaching via Sardine Canyon.

In 1986 I found a register left by a party who had given the name “Dragon Jaw Peak” to this mountain. Unfortunately, I didn't note the names or dates of that first entry. The name obviously comes from its proximity to Dragon Peak and “Dragon Tooth”. It could be that the jagged ridge connecting “Dragon Tooth” with “Dragon Jaw” resembles a row of dragon teeth from certain angles.

The peak's first recorded ascent was by Norman Clyde in 1925. He refers to the mountain as "the peak west of Kearsarge." (A Climber’s Guide to the High Sierra (1954), edited by Hervey H. Voge)

Many thanks to highitinerary for his contributions of photos and some important facts about the history of this peak.