Duane admires the view of Mt.... 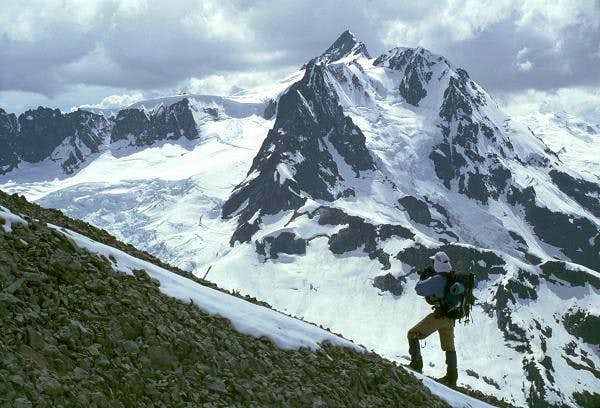 Duane admires the view of Mt. Shuksan from near the summit of Ruth Mountain.
« PREV NEXT »

The best picture of Mt. Shuksan

That is the coolest picture of Mt. Shuksan I've ever seen! The angle/location is really unusual, but really dramatic. This shot makes me want to climb Nooksack Tower and the Price glacier so bad!

Re: The best picture of Mt. Shuksan

:-) Thanks Michael! Yeah, Shuksan inpires lots of feelings. Nooksack Tower hasn't been submitted here yet, and neither has the Price Glacier route. So go for it!! I'm sure you'd be bored to tears with Ruth Mountain, but you're right about how dramatic Shuksan is from there. All of my shots from Ruth are wide angle, so they don't do justice to the scale of that place. You gotta use your imagination! :-) Someday I'm hoping to get up to Ruth early in the morning - maybe camp high - and get some morning alpenglow shots of that scene. It's gotta be just about the most amazing scene in the 48 states. But John Roper says the best view in Washington is from Luna Peak, and I sure wouldn't argue because Luna stands off from both the Northern and Southern Pickets. The Luna High Route has become a MUST trip for me since John mentioned that to me. :-)

amazing photo Bob!! (one of so many in your collection)

Hey Radek, great to hear from you! Long time no see. Thanks again for your kind comment. I've had very little time for SP for a long time, but I do check in pretty much daily. It must be time to take a look at all your latest greatest pix! Hope your summer is going well. -Bob

Same angle a little farther back

Re: Same angle a little farther back

Yup - and I had already voted that one a 10! Shuksan is awesome from pretty much any angle!

On a day like that I would certainly admire the view as well! Thanks for sharing with us.