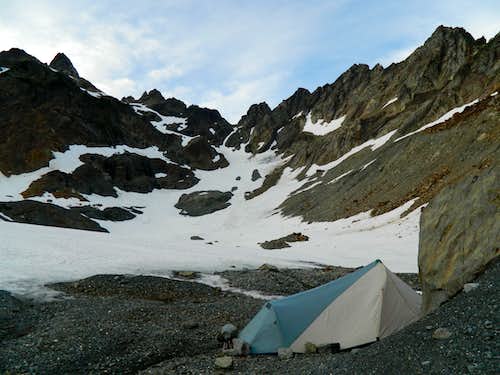 Under a near perfect sky, Wes and I watch the first stars appear. They arrive slowly from east to west toward the fading remnants of sunset. We sit with our backs against a large boulder, cleaved smooth on one side by moving ice.  The boulder is snuggly imbedded near the terminus of the Anderson Glacier, jutting up like a huge weathered tombstone. My tent is pitched twenty yards away, and we plan on climbing Mt. Anderson in the morning.
Massive walls of glacier scoured sandstone rise around us in a loose horseshoe shape, creating an alpine basin dominated by the snow streaked summits of Mt. Anderson and West Peak, rising 2,000 feet above our heads due north. Stretching south of us and dropping away is a wide canyon carved out by the glacier, long since retreated. At the far end, hemmed in by cliffs on its west flank is Anderson Lake, the sheen of sunset gleaming on its surface. Large chunks of ice can be seen floating in the water.
We sip tea and watch the rosy alpenglow fade from the peaks, the temperature dropping with each passing minute. The forecast has promised precipitation, and we know the pleasant weather will be short lived. It’s late September and the high country is well on its way toward winter. Its approach can be smelled and felt in the air; seen in the reddish tinge of the blue berry leaves. Our hope is to have a long enough pleasant weather window to climb the peak and return before the bad weather shows up. We certainly aren’t dead set on making the summit, however.
With our supper eaten and our tea drank, darkness descends and we make ready for bed. It’s time for one more call of nature before retiring for the night. I follow the glow of my headlamp away from camp along a thread of milky water bubbling out the end of the glacier. Far below us, this little stream becomes the Quinault River. I reach an overlook were the stream drops away in a cascade. Having an unobstructed view, I notice that the sky is still mostly clear, except off to the southwest.  No stars are visible in that direction, only a deep blackness. Weather on its way, I think. 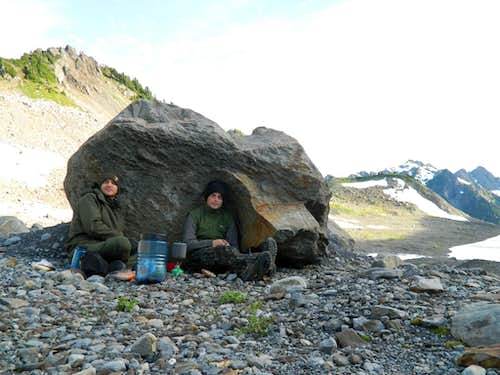 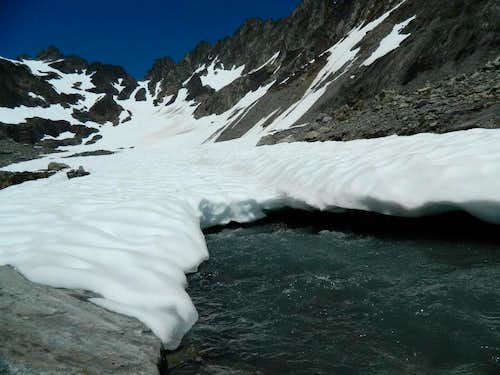 source of the Quinault River