As most of toponimes have also Slovenian names, it's worth mentioning that in Slovenian language č, š and ž are pronounced like ch, sh, and zh. 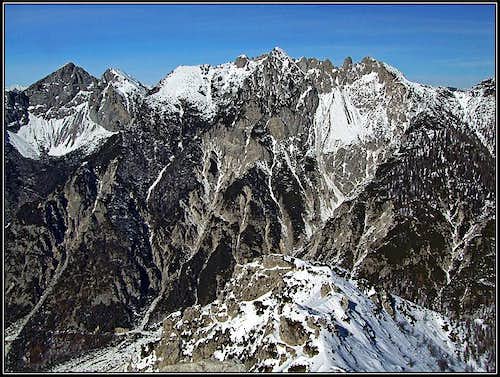 Due Pizzi from the west 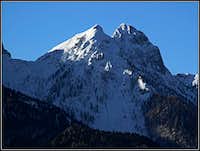 Gangolf Haub - From the SW

North of the majestic group of Jof Fuart / Viš and Jof di Montasio / Montaž, between the valleys of Fella/Bela and Dogna/Dunja, a long crest of lower mountains stretches in the east-west direction. Standing opposed to the giant wild north walls of the main group, each and every of these mountains offers a fantastic view on this part of Western Julian Alps. While that could be the main reason for a visit, these mountains are nice also themselves. As they are on some places sharp and rocky too, some of their routes require more than just skills for an easy hike up. These mountains are sometimes dubbed as Catena di Malborghetto / Naborjetske gore (The Chain of Malborghetto).

Due Pizzi / Dve špici / Zweispitz is a nice mountain, standing just in the middle of the group. As the name says, Due Pizzi is a kind of Twin Peak. The highest of the two peaks is called also Cima Alta / Visoka špica (2046 m), while the lower, eastern one is called also Cima Vildiver / Vrh nad Cijanerico (2008 m). They are made of a crumbly limestone, not appropriate for more serious climbing. Towards the south, Cima Alta shows a nice, 350 meters high triangular rock wall, which continues down towards Dogna/Dunja valley with a broad scree field. The northern side of both summits is rocky on the upper part, but soon the steep slopes get overgrown with dense vegetation. On the east, Due Pizzi are delimited from Monte Piper / Piparji with a saddle, called Forchia di Cjanalot / Čanalut, 1830 m. It is reached from the northern and southern side by a marked path. Towards the west, the crest continues from Due Pizzi, forming steep and almost never ascended, remote summits of Gosadon, 1968 m, and then, further towards the west, Cuel dei Pez, 1943 m. A tour in these mountains reveals us one more interesting thing - many remains of fortifications from the World War I.

Due Pizzi and Monte Piper from the SW, from Monte Gosadon

First to mention is of course the view on Iof di Montasio / Montaž and its neighbours. The group of Iof Fuart / Viš is already a bit remote to the left. Towards the north the easternmost outposts of Carnic Alps are not so much attractive any more, but also the mountains around Passo Pramollo / Nassfeld Pass and the Monte Coglians / Hohe Warte are clearly seen. Behind all these the snow-covered peaks of Hohe Tauern are shining. And the whole western horizon is boiling of nice Carnic Alps peaks and behind them the highest Dolomites.

For a broader overview see the pages of Viš and Montaž group and of Julian Alps!

1. Sentiero Arturo Ziffer. Dogna/Dunja road, 1268 m, up to Forchia di Cjanalot / Čanalut, 1830 m, Around Cima Vildiver, horizontally across the S wall of Cima Alta and by the W slope on top. 2 h 45 min, partially exposed and secured marked path. From Forchia di Cjanalot / Čanalut, also the lower of the two peaks, Cima Vildiver / Vrh nad Cijanerico, can be reached. The ascent is not hard.

East ridge of Cima Alta. Marijana Cuderman & Marko Kern: "From the notch between the two peaks, Cima Alta can be reached by the east ridge, but the climb is not just easy (and also not a hard one). The lower part of the ridge is very crumbly, higher we avoid it towards the right, where we need to climb over the hardest part and reach the pine bushes. Then we continue below the ridge and once again avoid the summit overhanging part by the right side."

2. From Plan dei Spadovai. Dogna/Dunja road, 1125 m, by the valley of Rio Cjanalot up to Forchia di Cjanalot / Čanalut, 1830 m, Around Cima Vildiver, horizontally across the S wall of Cima Alta and by the W slope on top. 3 h, partially exposed and secured marked path.

This alpine pasture can be best reached by two routes. The first one is simply the mountain road from Malborghetto (actually from Cucco, west of Malborghetto). From Cucco we cross the river of Fella, drive below the ex railroad (now the cycling trail) and then immediately turn west and drive some 700 m. After crossing Rio Granuda Grande, there's the crossroads, where we turn left (from the right the road from Santa Caterina comes). After some 300 m we park below the highway (46.497527, 13.414044). The road further on is closed for public traffic, on foot we reach Malga Granuda in some 2 hours. For biking this road is steep and rugged, but still worth considering (you profit on the descent). The second route to Malga Granuda is the marked path No. 604 from Bagni di Lusnizza. We park in the eastern part of the village, again near the highway (46.497704, 13.384122). From there the path goes in endless turns up through the woods, until it exits on the meadow (2 h 15 min).

The summit ascent starts on the lowest, southern end of Malga Granuda. The marked path No. 604 deters from the mountain road on a big curve, there are the plates. In the southeastern direction we continue through the high woods - the place is called Močila (='sources'). We cross a few ravines, then we ascend more steeply by scree slopes. Above there is on some 1650 m a crossroads. We reached the ex military trail Sentiero Battaglione Alpini Gemona (No. 649). We follow it to the left and by a steep passage (T3) gain a small side ridge. After crossing it we find ourselves on the western end of broad scree slopes. We cross them high below the vertical walls, then we negotiate another unpleasant rocky passage (T3) and finally through the high woods and dwarf pines reach the saddle between Due Pizzi and Gosadon. On the first crossroad (some 1850 m) we simply continue straight (towards the right deters a weak path on Gosadon). After gaining some 60 meters from the right the south wall ferrata joins us. We continue left and in many turns gain altitude through dwarf pines. But the view gets broader and broader. The last meters we make over grassy and rocky slopes, close to the edge of the south wall. This is the easiest ascent route on Due Pizzi (on Cima Alta). By the Swiss Hiking Scale it would be rated T3. Some short passages require a safe step, but none is really difficult or too exposed. From Malga Granuda 1 h 40 min. Gear: only good hiking shoes and poles.

4. From Malborghetto. SW of Malborghetto a narrow road goes till the Tarvisio-Udine highway exit, 750 m. From there we continue southwards by the cart-road and the path No. 605. By the valley of Rio Palug up to Forchia di Cjanalot / Čanalut, 1830 m, Around Cima Vildiver, horizontally across the S wall of Cima Alta and by the W slope on top. 4 h, partially exposed and secured marked path. 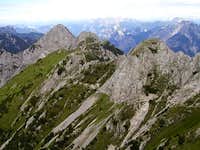 5. Crossing Catena di Malborghetto / Naborjetske gore is possible either in the E-W direction or vice versa. From the E we come from Monte Piper, but the direct descent on Forchia di Cjanalot / Čanalut, 1830 m, is not possible. We need do descend towards the SW on Sentiero Arturo Ziffer, and then to continue as described above under #1. From the west we arrive the area by the path No. 649, first around Cuel dei Pez, then below Gosadon and finally by the W slope on top.

This summit is rarely visited. It can be best ascended from the path No. 604/649 (Sentiero Battaglione Gemona). From above the saddle between Die Pizzi / Dve špici and Gosadon we go up by ex trenches along the NE ridge. The path from the south is nowadays very overgerown with dwarf pine bushes and is hard to find. Just below the summit it is still possible to see the ramains of military material cable-car and several buildings from the World War I. Difficulty: T3. 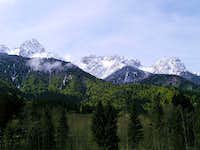 Even if ascents on Due Pizzi / Dve špici / Zweispitz can be easilly done in one day, there are a few huts and bivouacs, which mainly support the crossing endeavours.

Due Pizzi / Dve špici / Zweispitz can best be climbed in summer and autumn.

When we visited this nice peak, I had no photo camera with me (video instead). So, I am missing pictures from the summit. But I am relying on the fact that on SP pictures are coming soon...