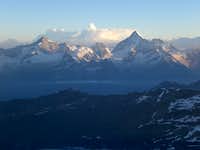 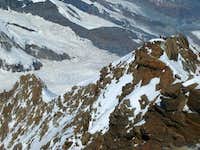 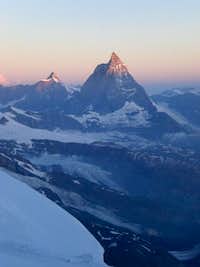 We made our way into the train station to buy tickets for yet another luxury we were unfamilar with in America as getting to the starting point of the climb is half the climb. The train continued through a series of stops as ascended into the mountains to our final destination was Rotenboden, the second to last. As we stepped off the train with numerous tourists and a handful of climbers also making the trek to Santa Rosa Hut nearly two hours away with a slight drop in elevation according to the train’s embedded table map. Not in a rush to get to the hut, we enjoyed our hike on a trail which traversed 300 feet above the Gorner Glacier and provided a perfect view of the lower mountains as much of the top was hidden in the clouds. As noted prior, most climbs I am accustom to prevent you from every seeing the final destination but a simple train ride in the Alps puts you far into the mountains most would ever reach otherwise. We continued on the straight path as it continually descended to the glacier below and from there, across the glacier leading back up to the Monte Rosa Hut. As we approach the hut I sensed the accommodations were similar to Grossglockner in Austria.

We walked as veterans into the hut and promptly went to the main desk and booked reservations for the night which luckily only few were still available. We enjoyed the rest of the day by hanging outside on the rocks with the world-famous Matterhorn peaking through the clouds. It didn't take long for us to get used to the Alps accommodations as we decided this night to have our first hot meal of the trip and I went back into the main desk and let them know we would be having dinner with the other 100 plus climbers. As we waiting for dinner, the culture of climbing in the Alps yet again impressed me as it is a lifestyle and the modern conveniences encourages more than a select few. The four course dinner was amazing which included soup, salad, a main entrée of rice and some sort of chicken curry, and finally desert. After dinner, we stepped back outside and watched the sun set in the horizon then went into the sleeping quarters and prepared for a few hours of sleep and as I lay next to the open window, the glow of the day was still surrounding the sky as the Matterhorn dominating the landscape. Life is amazing and we're about to climb our fourth peak of the trip.

We woke up around 1:45 a.m. and like other trips prepared breakfast with coffee, oatmeal, and fruit. As the others scheduled breakfast in the hut, we still felt in heaven being able to cook on a table inside while we prepared our gear. We were the last to leave the hut around 2:45 a.m. and as we stepped out in the midnight darkness, the stars were out in full force providing a faint hint of the summit to the south. The initial climb passing through large boulders on dry ground as it passed the framed structure of the future Monte Rosa Hut. We continued to head up with the headlamps of other climbing parties mainly to the right of our heading as there are numerous routes to gain the glacier above. With our shortcut, we passed other groups and quickly found ourselves in the middle of the pack when we stepped onto the glacier to rope up and step into our crampons...

It is awesome that you are contributing country high point trip reports on Summit Post. It would be cool to embed some photos in the reports though. People here love images.