On the outskirts of the city of Glasgow lies the small, but steep peak of Dumgoyne. It is a peak that can be seen dominating the horizon from the western and northern areas of Glasgow and is commonly known as The Sleeping Giant. Dumgoyne sits at the western side of the Campsie Fells range and can be clearly identified as it is this point that makes up the head of the giant. With the exception of this peak and Meikle Bin, The Campsie Fells are basically a flat and grassy plateau thats real character is displayed by the sharp cliff faces that overlook the small towns of Blanefield, Lennoxtown and Fintry.

At 427m, Dumgoyne is certainly not the highest peak in the land and is by no means the highest in the range, (this accolade belongs to Earl's Seat at 578m) but is definitely the one with most character and the one that is a favourite with many walkers.

The most popular route of ascent for Dumgoyne is from the west at Strathblane. The route begins next to the Glengoyne Distillery and strikes directly east-north-east, over a well defined path, all the way to the summit trig point. From the summit the views are surprisingly extensive, with Ben Lomond, the Arrochar Alps, Crainlarich and Loch Earn hills clearly identifiable. On a really clear day, the tops on the Isle of Arran can also be seen.

Dumgoyne sits directly next to the West Highland Way, which is a long distance walking route linking Milngavie, on the outskirts of Glasgow, to Fort William. As Dumgoyne is only 7 miles into the West Highland Way and only takes between 2 and 3 hours to complete, it proves a popular early detour for some of the walkers. Whether it is a more popular sideline activity compared to the tour/tasting session of the distillery is highly debatable!

Diretions detailed are from Glasgow only as this is a local hill to the city (roughly 30mins travel distance).

Car directions to Dumgoyne from Glasgow can be seen on the embedded map below. Click on the view larger map link for more detailed directions.

BUS
From Buchanan Bus station in Glasgow, get the No.10 bus for Balfron which stops right outside the gates of the distillery. Buses run approx every hour. You can also get the Whisky bus straight to the distillery, that will cater for small to large groups, so you could add a nice whisky tasting session into your climb! Details here. 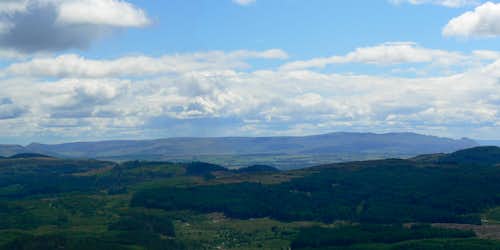 The Sleeping Giant from Ben A'an.(Photo by: Boydie)

There is a huge variety of accommodation available in the city of Glasgow, which is detailed on the map below;

Below is a list of possible accommodation venues that are located in the direct vacinity of Dumgoyne.

Wild camping is totally legal in Scotland and can be done in various locations close to Dumgoyne, especially as it runs close to the West Highland Way. This is due to the Land Reform (Scotland) Act 2003 that was mentioned earlier.

Campsie Fells Panorama from the summit of Dumgoyne. (Photo by: Boydie)

The following websites will provide invaluable information on the expected conditions for Dumgoyne.

The Central Highlands by Donald Bennet

The Corbetts and other Scottish Hills 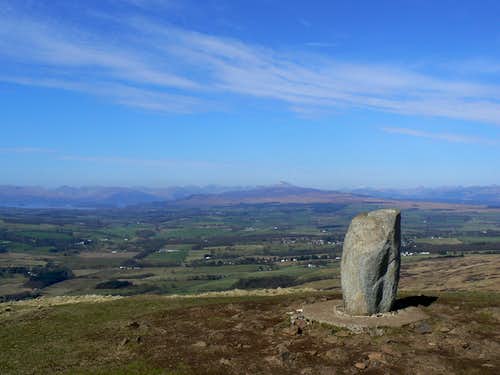