A day in the mountains doesn’t get much better than this one unless you need technical climbing to be a part of it. Remote peaks, unnamed peaks, a great deal of off-trail travel, ridge traverses, exposed scrambling, and million-dollar scenery are all on order here. You will also climb six different distinct summits; only two are named, and they are also the only ones with enough prominence to qualify as ranked peaks, but they are summits nonetheless.

Most of this route is easy going technically speaking, but there are some dangerous sections because of the need to negotiate loose, exposed terrain. If you don’t like such conditions, and many sane people don’t, this is not a route for you. Furthermore, if you need a step-by-step account of the route, especially those dangerous sections, this is not the page for you; that is not the way I climb, and it is not the way I write pages. For everyone else, this page should be more than sufficient to provide necessary information for this highly enjoyable route.

This is a loop that begins and ends at Kirwin, a high-elevation trailhead and ghost town deep in Wyoming’s Absaroka Range. 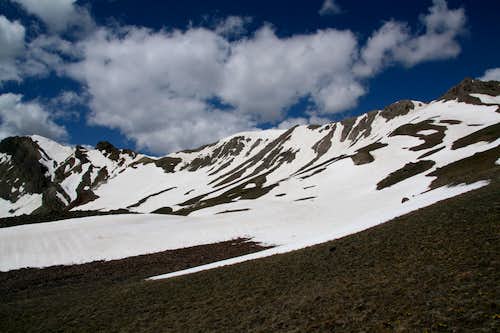 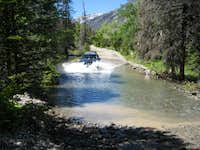 Hike 3.4 miles from Kirwin through the upper valley of the Wood River. There are a few stream crossings along the way, but I have never seen them in dangerous conditions during the summer. Just after a crossing to the north side of the stream, at about 10,200’, look for a sign pointing the way to Bear Creek Pass and Dunrud Pass (the trail also makes a sharp turn south here to climb to Bear Creek Pass). Also, notice a tributary joining Wood River from the north. Cross Wood River and ascend a low ridge on the right side of the tributary. Soon, you will be in a grassy basin beneath the east face of Dunrud Peak. Dollar Mountain is also visible. Pick a route up the scree to Dunrud’s summit. My route was 1.4 mi from the trail to the summit.

From the summit, descend to a saddle between Dunrud and then Dollar and then ascend the ridge to Dollar. You can follow a game trail almost the entire way. Below the summit, there is a rock face that requires scrambling to surmount. My climbing partner described his way through as 2+. I was hungry for some scrambling and exposure and stayed closer to the edge and the east face; my way was Class 3 verging on Class 4, with rock that wasn’t terribly loose but definitely not something to go skipping on without testing it first. From Dunrud to Dollar, the route was 0.7 mi. 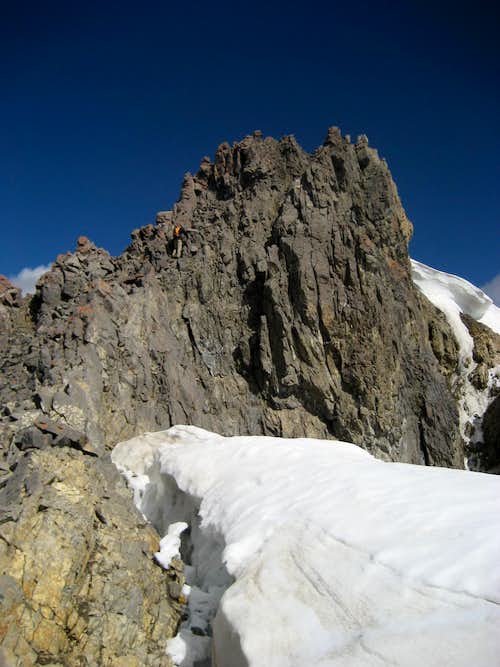 Me on the scramble up Dollar-- photo by musicman82
Descend on a game trail to a saddle. Make sure you look back to appreciate the colors and forms on Dollar Mountain revealed by this perspective. 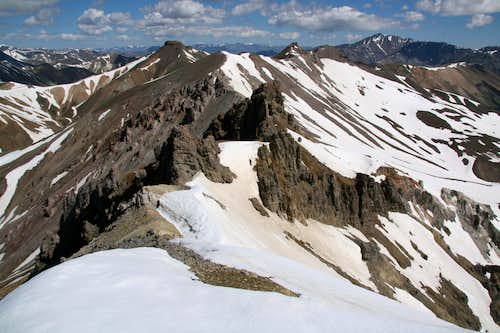 North from Dollar...
Now the good stuff begins. It is woefully short, not even a mile, but it makes the climbing day.

You have to traverse the ridge to an unnamed summit at about 12,260’. This traverse is the crux of the route. When you can’t stay on the crest of the ridge, the best terrain is on the right (east) side. Sometimes there is tricky down climbing. Sometimes there is serious exposure without many inches to spare. Always, there is rotten rock and slippery footing. I would put the harder spots at Class 4, though maybe that’s the exposure talking and they’re really a hard Class 3. 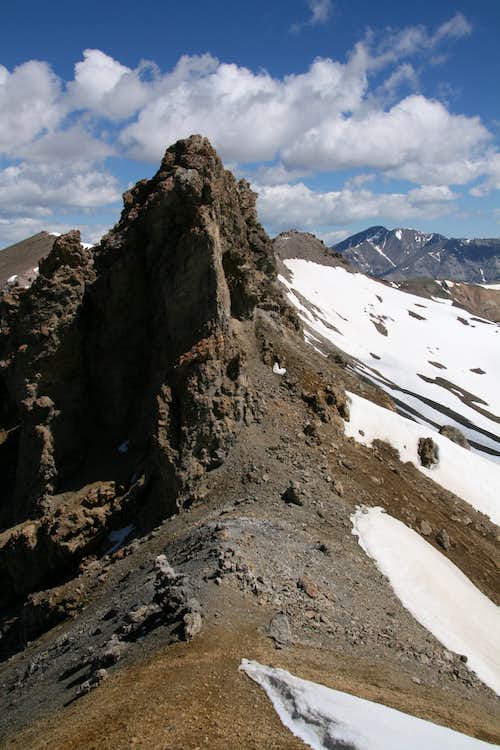 After Point 12,260, make an easy traverse to Point 12,284. Then descend east on steep terrain, using either a gully or the ridge itself. Expect a little Class 3 scrambling getting into the gully and maybe some inside it. In early July, there was significant snow here, allowing for a fast descent. 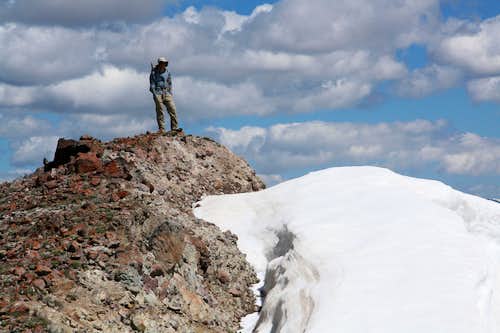 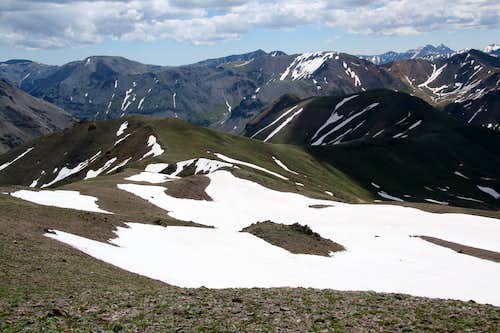 Back to Kirwin
Now it is time to make plans to get down to Horse Creek Trail, northeast of and about 1300’ below Point 11,508. The easiest and smartest thing to do is to go back to the 11,228’ saddle and descend from there. The terrain is relatively gentle for an off-trail descent, and the elevation change is less than 900’.

But I am stubborn and hate backtracking, so we hiked to the 11,300’ saddle just east of Point 11,508 and descended from there. In just 0.6 mi, we dropped 1100’ to reach the trail. The terrain was very steep and the footing was bad. There was a long snow bank, but it was packed too hard for a safe glissade. 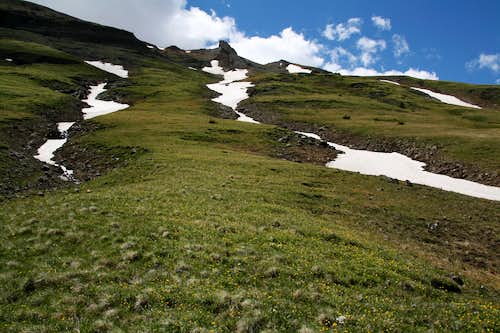 Descent
What you do not want to do is go to Point 11,379 and try to descend from there. It is all cliffs there, and although there may be a decent way down, it will probably be difficult to find it.

Horse Creek Trail meets the main trail from Kirwin after about 1.5 mi, and from there it is an easy hike of a little under 1.5 mi back to the trailhead. Up high, Horse Creek Trail disappears in meadows for awhile; angle left to some trees above the gorge below to find it.

For a longer variation of this route with more scrambling, go north from Point 12,284 instead of descending east. A short distance north from the peak is an unnamed summit that is approximately 12,300’. From this perspective, it looks quite a bit like a tepee, and the south approach to the summit appears to be at least Class 3. Climb this peak and then descend east on a ridge that appears to be Class 2 or 3. Go over Point 11,652 and drop to a pass above Horse Creek. Pick up Horse Creek Trail here and follow it back to the main trail from Kirwin and from there to Kirwin itself.

I can only speculate on the Class 2 and 3 conditions right now, but it is my goal to go back and climb that route next year.

These are some views of the route looking back south and from the east; they may be useful to people doing the traverse the opposite direction I did. 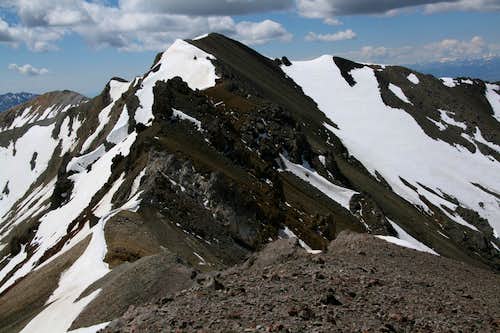 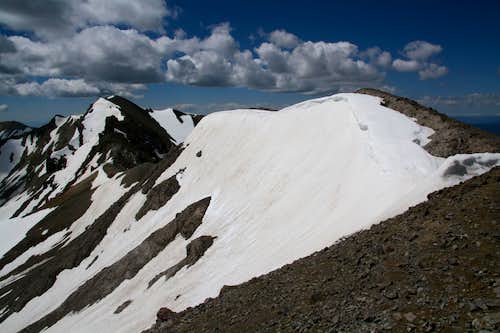 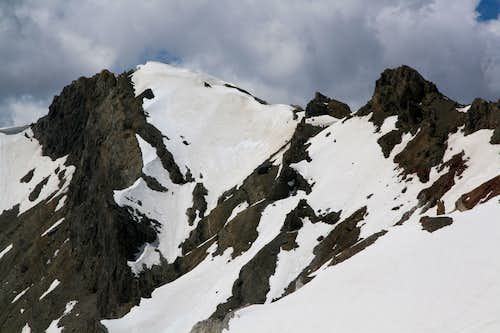 Ice axe in early summer. A helmet might make you feel a little better in the loose, exposed sections, but I didn't carry one that day.