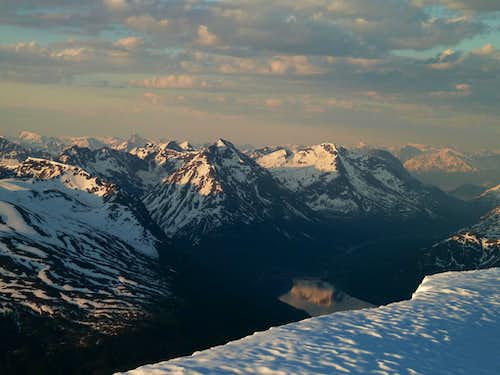 Taken on June 1, at 3:00am.  DurmÃ¥lstind is center, Ramfjord below.
Durmålstind is at the head of a small fjord. Because it rises straight from the sea, and has no easy route to the summit, it feels and looks like a bigger mountain than it actually is. It's proximity to a major highway makes it more visible than other higher peaks, and improves access. However, when this author first climbed it, there was no evidence of other climbers having been there.
Most mountains in this area have steep faces, and sharp ridges, but there is almost always a moderate slope, or glacier that allows access. Durmålstind lacks such a feature, thus making it more desirable for the climber.

Get yourself to Tromsø. This town is easiest to access from the air, as there are no trains, and the main highway just isn't that fast. Norwegian airlines offers cheaper deals than others. Once in Tromsø, drive south on E8. After about 20 kilometers, you should be driving along the shores of Ramfjord. As you approach the Northern arm of the Fjord, Durmålstind can be seen at the head, and to the left of the SE end of the fjord. Continue driving along the shore of Ramfjord, until coming to its end. Drive a short way further, directly below the peak. There is a major cleft splitting the mountain. It's easiest to drive just past this, then watch for places to pull off the highway. In summer there is a dirt road that parallels the main highway, offering easy parking. From here, check the route description for the West Face.

It may also be possible to climb the South Ridge, though several steep gendarmes appear to block the way.  The North Peak of Durmålstind has also seen a few ascents.  Some loose, exposed nasty scrambling from the summit, around a subsummit and on to the north peak has been done, see the link below, and others have climbed the north peak directly, starting in Saltdalen, which is the valley to the north of the peak.

Nobody cares about what you do here, as long as you don't make a mess.  As of summer 2013 there is major road work being done in this area, so parking can be problematic.  A new dirt road that accesses saltdalen has created some new parking possibities.

February to May. This climb is all about waiting for the right conditions. It is prone to avalanches, at least one slide occurs here every year, sometimes several. Arctic fronts drop lots of dry powdery snow, then a warm wet Sou'wester comes in dumping heavy wet snow or rain. Then it clears off and gets down to -20C. This is followed by the cycle happening all over again. In the late spring, the sun is up for 24 hours, and the snow just can't melt fast enough. This creates nice runny slurpees of snow oozing off every steep feature. Perfect Avalanche Conditions. In mid-April of 2004 a slide blocked the highway with a mix of snow and uprooted birch trees.

In summer the rock is too loose to consider reasonable.