Since this mountain is one of the top 100 most prominent peaks in the state of Utah, I felt for some time that I wanted to make the trip out and pick it up. I knew about the route provided by Eric as shown on the main page but I also knew that Greg Jagielski and Kadee Smith had found a nice way up via the east side. Their route did require a high clearance vehicle with good tires and possibly the use of 4 WD but I could see that I could make it to the mine, the distance would be considerably less and the elevation gain under 1400'. Weighing that versus 6 miles and 3000' of gain as required by the other route, I knew I had to give it a shot. My wife volunteered to ride along with me and provide walkie talkie support while I went after the peak (she doesn't hike but does love the western desert country of Utah).

This was an important mountain to me as it would be #94 out of 100 on the list linked to above. Dutch Mountain comes in at #89 on that list with 1934' of prominence. Thanks to Greg and Kadee for their information, to Eric Wilhite and Victor Zhou for their information as well. Victor has put up a great set of pictures of his hike to the summit on his facebook page.

If you like great viewpoints, this one is one of the best for seeing the salt flats and on a clear day you can see forever.  I will write up a special trip report for this one later on but I felt that sharing this route might be beneficial to those who might be interested in this mountain.  Be aware of course, that this is a rather isolated area and having a vehicle in good condition, lots of water, good tires and a full tank of gas is mandatory.  You could get away not needing high clearance or 4WD if you would be willing to park and walk further.  Gold Hill has some residents but no services.  We also encountered a large scale sheep operation at the turnoff noted below as the 4724' one. 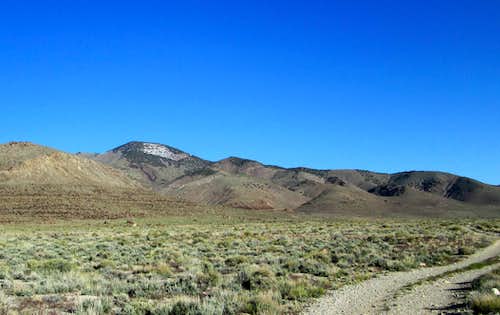 
Fill up your gas tank in Wendover because there is no gas available where you will be heading and my odometer In Wendover, take the road that heads towards Ely and head south on US 93 Alt. Drive about 25 miles to the turnoff for Gold Hill and the Goshute Indian reservation and drive 14 miles on pavement to a non paved road that heads for Gold Hill, 11 miles away.

Drive through Gold Hill and at waypoint 40.1728  -113.8213 (nad 27), leave  the main road and take the good road that heads north. Follow this road for almost 2 miles to where at elevation 4724 (as shown on the topo) and waypoint  40.1927  -113.7973, take a rougher road that now heads directly toward the mountain.  This road will lead into Spotted Fawn Canyon and will head toward the Silver Hill Mine which is located at an elevation of 6400' and waypoint 40.2167  -113.8377.  The road becomes rougher as you get closer to the mountain but unless there had been snow blocking the road, there was nothing that would have been a problem for my Tacoma truck.  We made it up to the mine with only a few spots that made me question if it was smart to keep driving.  However, having said that, if you find the road has changed or is more than you want to deal with, find a spot and park, the road up to the mine will be easy walking from just about anywhere.  Lots of sharp rocks lend to my recommendation that you need to have good tires for a road like this.  When I parked at the mine area, my odometer read 58 miles from Wendover. 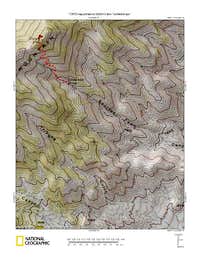 From the end of the road at the mine, make your way directly up the slopes toward the summit. There is no right way or wrong way, just head up the initially grassy slopes. The slope steepen dramatically and you will find your self working up into the trees on some sections of loose talus. A small cliff band is the only obstacle to overcome and I found a way that was relatively easy and non technical but did require the use of hands in a few spots.

total distance is less than a mile to the summit and has an elevation gain from the mine area of about 1350 feet.

On the summit I found a rock cairn with a bottle register inside as well as a central benchmark and one witness benchmark. An old wooden surveyors tripod is laying on its side just a few feet from the highest spot with the cairn.


The prize - The summit 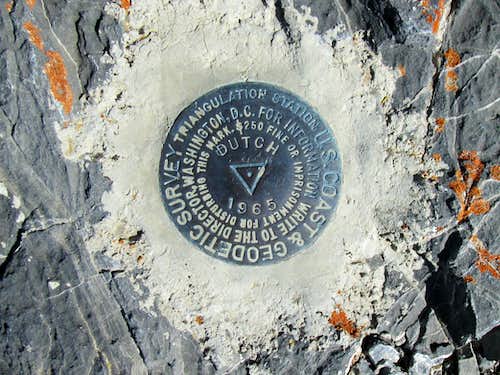