Dutchman and the West Ridge

This route is primarily used in winter to summit Humphrey's Peak. It is one of the more popular routes and sees a fair amount of traffic from both skiers and snow boarders as well as snowshoe hikers. If done properly it will take you through the bomber wreck. It is only one of many, many ways to reach the peak at this time of year.

You drive to and park in the same lots as you would for the summer trail. The only difference is that the ski area can complicate things and parking may be limited on busy weekends, especially holiday weekends and weekends after a storm when all of Phoenix seems to come up to Snow Bowl. Also, if the road is bad, but the ski area doesn't have enough snow to open, the road to the parking area may be closed on weekends. This is typically only an early season problem. It is best to park below the Hart Prairie Lodge to avoid being locked in behind a gate if you plan to get back well after the ski resort closes.

Over the Thanksgiving weekend in 2010, Snow Bowl Road was gated and locked due to a whopping 1 inch of snow! I'm sure this road closure is less about public safety and more about liability, and probably more about Snow Bowl protecting it's grounds from the public. Point is, neither the US Forest Service nor Arizona Snow Bowl updated their websites to inform the public that the road was locked and closed. Therefore, you may want to call them before making a drive to the mountain if the ski season has not begun and there has been snow. From my past experience, the road is open with Snow Bowl's administrative offices during the week, but not on weekends or on Holidays if these conditions exist. Still, who closes a road for 1 inch of snow?
AZ Snowbowl:928-779-1951
Coconino NF:928-527-3600

When parking low you must first walk up the ski run to find the first and only leg of trail you will use. Ignore the lower trail that leaves from the kiosks and the bottom of the ski runs. Walk up about 1/4 to 1/3 of a mile to the section of summer trail that leaves from the Agassiz Lodge. The trail will be buried and the only way to find it if you don't know the area is to look for the small brown Forest Service Trail Marker which will be on the north or left side of the Hart Prairie Ski Run. 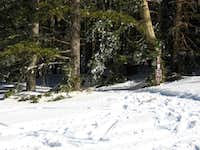 After having found the trail follow it on its northerly course to the Kachina Peaks Wilderness Sign and the sign-in box. If you are out in a good year you will find them buried under many feet of snow, and they might not be visible. Continue on the trail which will follow the grade of the mountain and head up at a gentle pace. You will run into a small drainage gully and lose some elevation for that feature. That point is about half way from the ski runs to the Dutchman Glade. The trail will continue for some time to the area that is normally the first switchback in summer. 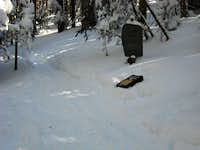 Instead of turning back to follow the trail on its second leg, begin to head upslope through the more open areas of down trees and rock (which will be under snow). Ideally, you will head both uphill and slightly to the north. After some time you will come to what is the Dutchman Glade; the large rock slide area that provides early views along the summer trail. The next leg of the trail will take you directly up this slope. Travel can be slow if the snow is soft, but it shouldn't take more than an hour for most people. It is about 800 feet from the top of the glade to the bottom. Views are usually great in this section.

From the top of the Dutchman enter the forest and head about 200 to 300 to the north and about 1500 feet up slope, with around 500 feet of elevation gain. This will take you to an opening near treeline which contains the bulk of the remains of the 1944 B-24 Bomber Wreck. They may be under too much snow to see some parts of the wreck, but once in the clearing you can see the landing gear sticking up. These are never buried as they are about 10 feet tall and wind is usually strong up here. 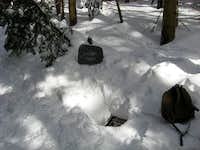 From the wreck leave on a northeasterly trajectory to move towards treeline and a pretty solid cornice that forms on the north side of the ridge. Up this high the snow is scoured rather well and you may want to switch from snowshoes to crampons. Follow the normally dependable cornice to the rim of the volcano. In some years dry snow conditions and north winds will prevent the cornice from forming. It is my experience that this is rare. In the case it is not present, there may be a snow slope on the south side of the ridge that can be used. The sun will soften the snow on the south face, but it is better than being on the lose rock.

At the top of the rim hike to the north and after a false summit or two you will reach the true summit of Humphrey. In winter the visibility is great up on top, but so too can be the wind. 60+ miles per hour is not uncommon.

Snowshoes and crampons are ideal. You won't need crampons for this route, but they are recommended to protect your snowshoes from the rock that is commonly hidden under a thin crust above treeline. You can always just go in boots up there. This route won't require an Ice Ax, but it can be good for stability, especially if going under high winds. Otherwise, its just warm clothing for winter at 12,000'.

SNOTEL Snow Conditions The current best source for west side snow conditions, even though reporting from the Inner Basin.

Back Country Beta Site activity seems to be down over past years with better snowfall, such as 2008, 2010, and 2011, but posting there and asking a question or looking for a partner, is a good bet for getting local sources or partners.

A Kachina Peaks Wilderness Permit is no  longer required to be in the San Francisco Peaks backcountry in winter, from any access point.  I suspect this decision relates strongly to the ski area being open well before snow is even present in the backcountry, complicating the permit timeline, which formerly was required when the ski area was in operation.

I have been asked by fellow Flagstaff SP member Andinistaloco to remind hikers who wish to use this route above treeline that it is only legal to do so when it has snow on it. Snow will linger well into the spring in the area the cornice built up during the winter, and you should be able to use the route into early May if there is enough snow to bury the trail. You can access the bomber wreck at anytime of year.

The San Francisco Peaks are extensively skied in the winter months. Humphrey's peak is no exception, and in fact it is usually the best peak to ski off of if the snow allows it. Due to terrain, vegetation and wind the other peaks are not as conducive to a ski descent, and while wind can quickly remove the snow from most areas above treeline, a descent can be made from Humphrey or very near it by using the various chutes that run out on the west side. It is of course, best to do this after the snow has stabilized. For up to date beta on skiing Humphrey or anywhere on the San Francisco Peaks/ Kachina Peaks, see the back country beta site.

There is a steep avalanche chute just north of the described route which can be accessed for a steeper hike to the west ridge. From the bottom of the Dutchman, proceed north and slightly up hill for around 3/4 of a mile. Eventually, you will enter the bottom of the slide. While not always usable due to avalanche danger-there was one in late December of 2008-this route can be used to practice steeper climbing and kicking into snow on steep slopes. The upper portions of the chute are up to 35 degrees in angle, and they can ice up from rime storms or have a crusty surface from persistent wind scour. If you choose this route you will definitely want crampons and an ice ax. It is also fun to glissade down. I found this route to be good to use to practice for the Mountaineer's Route on Mount Whitney in March of 2009, though the snow on Humphrey was thinner and softer than on Whitney. This route's aspect faces west while Whitney's final 400 faces north, so that may be why. It tops out at pretty much the same spot as the cornice on the west ridge and you can come up it and go down the west ridge if you prefer.

In November of 2013, Arizona Snowbowl began making artificial snow using reclaimed waste water pumped from the city of Flagstaff, up to the Ski Resort. As a result, the ski resort is going to be open before deep natural snow, and natural conditions allow for the use of this back country route. Also, the resort is no longer reliable for snow reports, as they report a snow depth reflective of their artificial base. They no longer report a season total, either. However, they still report a 24 hour snow total, and sometimes a storm cycle total, which can be useful. However, for a reasonable idea of west side conditions, the Inner Basin SNOTEL site, at 9700' and known as Snowslide Canyon SNOTEL, is now the only non-forum on-line resource for conditions. Keep in mind that snow is blown into the basin where it can settle. See the links section.