Ending on a high

Although any time of the year is good for visiting Iceland, most of those that want to enjoy the great outdoors do so in the summer. Makes sense if you consider that the daylight period on the shortest day is roughly between 3 and 4 hours, depending on latitude, so mid winter the time to see all the sights is limited. In contrast, around the summer solstice it never really gets dark; the morning twilight simply follows the evening twilight. Since Jan and I both happened to be free in May we decided to come early, and early it was - the fact that we found several campsites still closed testified to that.

However, at least for one reason it turned out to be an excellent choice: all the snow that was still covering the glaciers greatly reduced the crevasse risk. It's also just as close to the longest day as by the end of July, at the height of the tourist season, and we experienced that it never really got dark during the night from 19 to 20 May when we were in the airport, skipping a night's sleep as we waited for our early morning flight home. As for the weather you may ask? Well, on average May is a bit colder than July, but has somewhat less precipitation. That doesn't sound too bad: If it's cold, I'll just add another layer, but I don't like hiking in the rain, let alone climbing.

Of course, these are averages. In our case, it was markedly colder than normal, which wasn't a problem, but also a bit wetter which was less agreeable. And what I didn't think about beforehand, there were days where the wind was so strong that some roads were closed!

Apart from the rest days that we enjoyed, courtesy of wind or rain, we still got to see a lot of the country and managed to climb Snæfellsjökull. And as the date of our flight home was approaching, we got lucky. The weather forecast for the southeast of the country, our primary objective, finally looked favorable. In fact, studying the detailed weather map showed that the center of a high pressure system would come to sit right on top of the Öræfajökull glacier!

To take full advantage, we started walking when it was still drizzling off and on. We got a bit wet that day, and ended up camping lower than we had planned. But as we woke up the next morning, things could hardly have looked any better, and it stayed that way for the rest of our three day trip on the Svinafellsjökull and Öræfajökull glaciers, doing a circuit of Hvannadalshnúkur and climbing it in the process. And despite all those rest days we already had, I'm going to need a few more now: I'm writing this two days since we came down the mountain and my legs are still recovering. 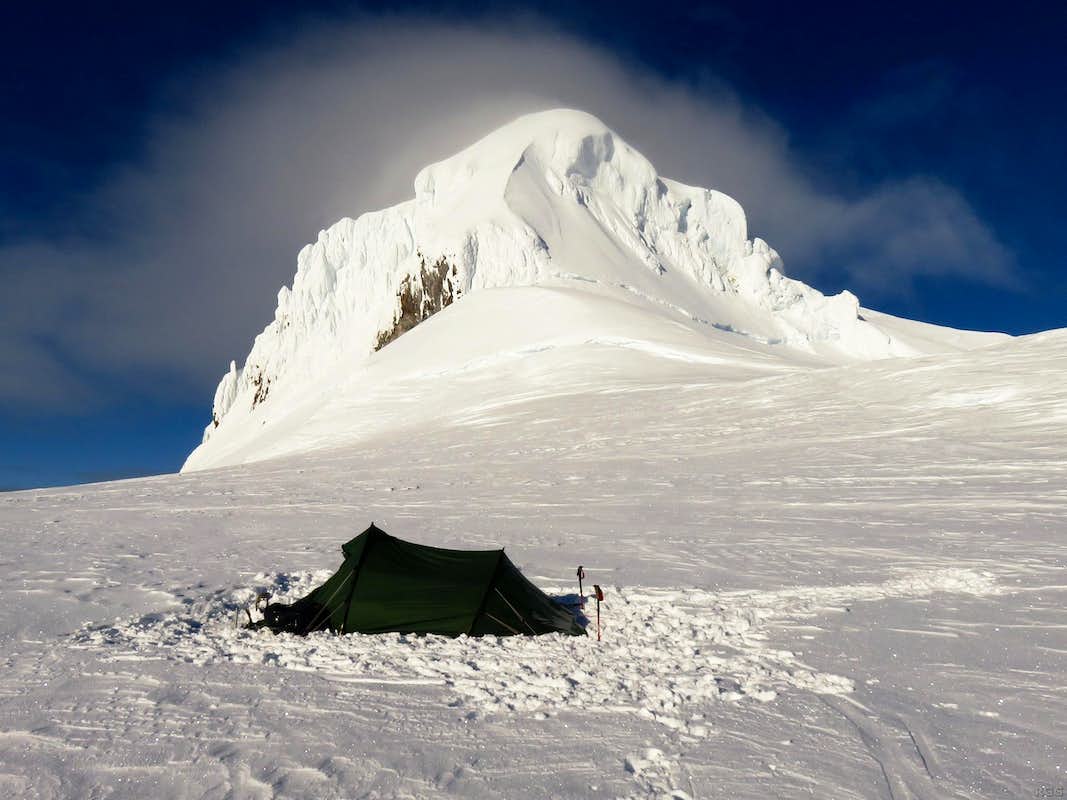 On our second night we camped right next to Hvannadalshnúkur, on the saddle with Snӕbreið. With the center of a small high pressure system right on top of us we had no precipitation, very little wind and only a few clouds. Including a persistant one hugging the top of Hvannadalshnúkur I should add, so no 360° panorama, but that was only a minor inconvenience. As soon as we descended just a little, we got great views again.