The Schesaplana group from Naafkopf, Liechtenstein's 3rd highest, in the southeast corner of the country
After hiking through Liechtenstein from north to south, and visiting its highest summits, I turned my sights to Schesaplana. It's the highest mountain in a wide area, and, at least as important, conveniently located east of where I had ended up, in Switzerland, just south of Liechtenstein and pretty close to the Austrian border.

A week from now I wanted to be back in Solden, further east, in the Ötztal in Austria. Time wise it would be possible to hike there, but then I would have to stay in the valleys and I prefer the mountains. And so my eye had fallen on Schesaplana, which wasn't a big detour on my way east. From there I could descend into the valley and quickly cover some of the distance by public transport, before going up high again. 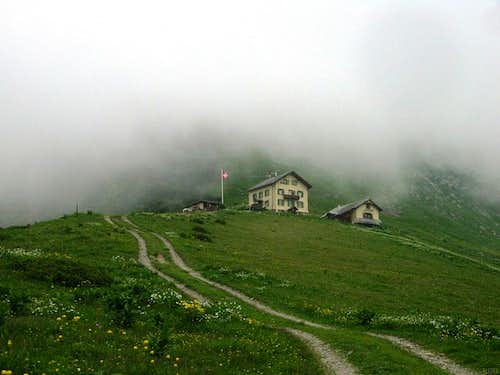 Arriving at the Schesaplanahütte in the nick of time
By late afternoon I reached the Schesaplanahütte, a mountain refuge in Switzerland, southeast of Schesaplana. I got there just in time. It started to rain when I got there, and it kept raining for a day and a half. I don't care much for hiking in the rain, let alone for climbing, so I stayed inside and had an unscheduled rest day. Early next morning it wasn't much better, but a few hours later the rain faded to a drizzle, and I headed out. 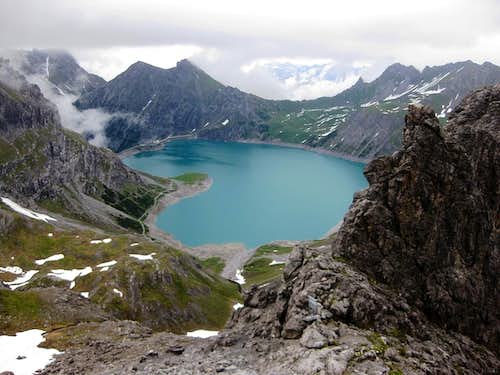 Lünersee from Gamsluggen
Originally, my planned ascent route had been the shortest way up, the Schweizersteig. However, the hut warden told me that the route was still covered by snow, and that it would be more dangerous than usual and not easy to find. His  advice made me change plans and so I went around the mountain, first to the east and then north across the Gamsluggen saddle. The weather still wasn't all that inviting and I couldn't see Schesaplana from the saddle. Instead, I went to the Totalphütte, conveniently located on the eastern slopes, and waited. It was a pleasant refuge to wait for better conditions. But, although it stayed dry, the clouds didn't rise and the mountain stayed hidden.


By next morning the weather finally started to improve. While the highest parts of the mountain were still not clearly visible, I went up with a couple of Germans I had met in the refuge. Because of all the snow, I brought my ice axe - you never know - but I didn't need it. 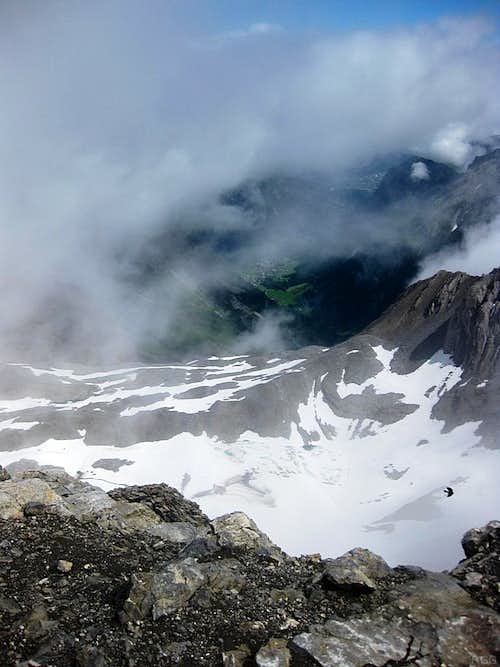 Looking down on the Brandner Glacier from Schesaplana
There were two steepish snow slopes where falling would be dangerous if you didn't self arrest quickly. Apart from that, the slopes where either gentle enough, or leveling out at the bottom, which meant that falling would simply mean a fast descent. In fact, on one of those slopes I demonstrated to my hiking partners what to do in case of a fall. They didn't feel like practicing though. 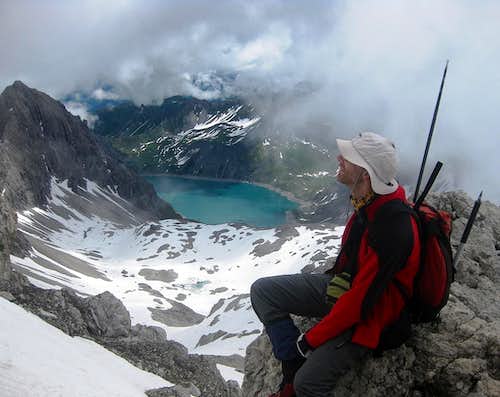 High on the snowy slopes of Schesaplana, with the bright blue Lünersee below
Back at the Totalphütte, we said our goodbyes. I ate something, then descended to the parking lot at the base station of the Lünersee cable car. And, sure enough, it didn't take long before a bus arrived that brought me to Bludenz, where I hopped on a train heading further east.