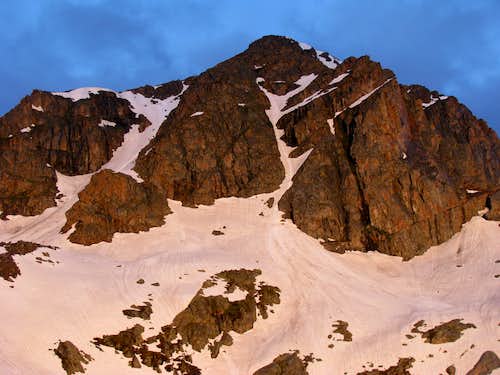 Mount Powell is the King of the Gores - but from the West its views are less than royal - a big bump, by far not as impressive as Peak C right next to it. Things are a lot different on its remote Northeastern side - dramatic walls flanked by snow colouirs rise from Duck Lake - a real majesty worth of the crown of the Gores. On its left side East Colouir offers an enjoyable (and not to steep) snow climb right up to the summit. 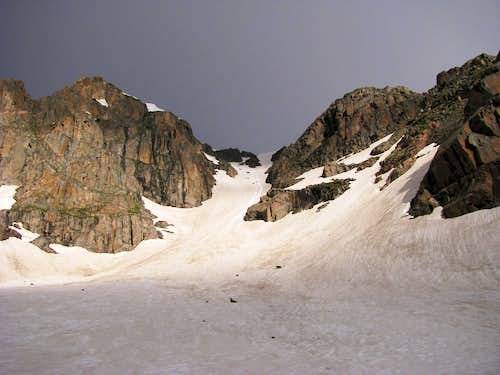 Trailhead: Piney Lake Get off at Exit 176 on I 70 - go west and turn on Redsandstone Rd, which turns into Piney Lake Road. Most of it is dirt road, can be a bumpy ride, but makeable for a normal sedan - just take it slow. Park outside the reserve gate to your right. Route: Hike on Piney River Trail to the waterfalls. An indistinctive trail branches off to the left about 100 yards after the falls. Follow the trail up to a bowl below Mount Powell and Peak C. Continue on the trail up to Kneeknocker Pass. The trail ends at the pass. The other side of the pass may be covered by a large snowfield well into the summer. Climb over to the left side of the snowfield/valley and continue on to the saddle between the craggy East Ridge of Mount Powell and Dwarf Pyramid. Turn around the East Ridge of Mount Powell and East Colouir is right in front of you . The colouir gets you right underneath the summit. Return via the Standard Route back down Kneeknocker Pass. Notice - the summit area of Mount Powell is a lot larger than that of most other summits in the Gore - it can be easy to lose the orientation in fog. A direct descent via the West Face down to the basin below Mount Powell is possible, but this is a very tedious affair. 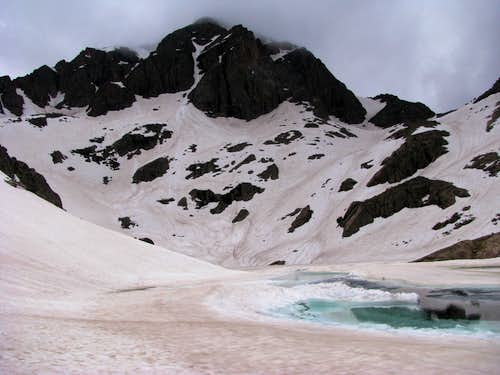 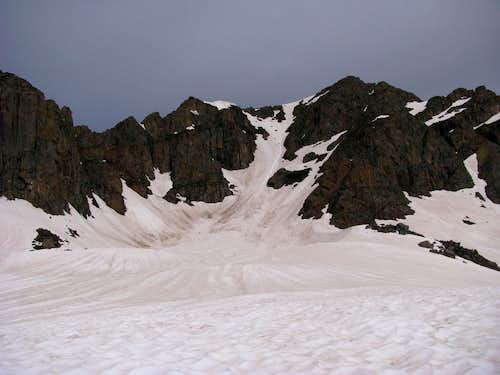 East Colouir is in the middle of nowhere. Only a handful of people venture that deep into the Gore Range every year. You are on your own if anything goes wrong. Avalanches are a threat on each side of Kneeknocker Pass until early summer. There are only a couple grassy spots around Duck Lake for camping. You will be high above treeline without shelter against heavy thunderstorms which hammer the Gore Range during the monsoon season. Crampons, helmet and ice axe are a must for this trip.