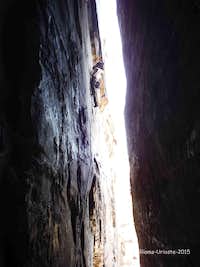 The East Face of Mescalito at Red Rocks often gets overlooked for more popular destinations on the small pinnacle of a mountain like Dark Shadows Wall to the right and Mescalito’s south face to the left. But the lack of attention for the east face is not for a lack of published routes: 22 as of 2009. Y2K , 4 pitches at 5.10a is no doubt the most popular of the east face routes. The remainder are relatively obscure lines by Red Rocks standards. And for good reason really; the routes are not that long, many being from two to three pitches, and the rock not that good on the east face of Mescalito. Only the northeast buttress routes, Deep Space and Centerfold, can reach the summit and neither receive accolades from Handren. 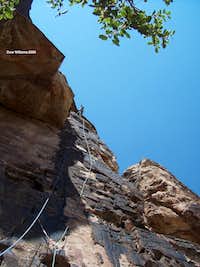 The east face is by far the warmest of the three faces to climb on Mescalito. Dark Shadows Wall represents quite the enclosed north face and the south face gets a lot of sun blocked out from nearby Juniper and Rainbow Peaks. Park at the Pine Creek trailhead off of the Red Rocks loop road. In the spring and fall, on weekends, you will find an array of tourists hiking this section of Pine Creek Canyon. Hike down the trail along the creek, past the old homestead and into the wash as it heads for Mescalito. To reach Y2K which represents the north side of the east face, look for a rather indistinct trail off to the left and up from the bottom of the wash. To avoid bushwhacking, wait until you have identified the route and are basically underneath it before ascending the bushy slope to the base of the rock. This goes for pretty much all the routes. A trail does circumvent the east face, but quite a ways down from the base of the peak.