Grand Teton National Park is approached from the south on US 89. On Teton Park Road turn at Moose Junction and head toward the entrance station. The Moose-Wilson road turnoff is on the south side of the entrance station. This will be right after the fee station if you are driving from the north. Drive along this narrow paved road until you reach the turnoff to Death Canyon which will have a sign. Turn here and drive west toward the mountains. Follow the rough dirt road for about 2 miles to the trailhead. Anyone with a passenger car may want to drive slowly or park at a pullout a mile or so up the road. High clearance vehicles can make it to the trailhead. 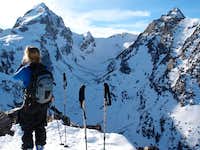 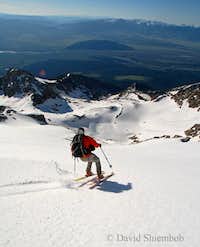 Buck Mountain is the highest alpine peak in the southern end of the Teton Range. It is a major Teton peak and sits just below 12,000 feet in elevation. The mountain stands out in all directions and appears much larger than it really is. Static Peak is 11,303 feet tall and is located southeast of Buck Mountain. Peak 10,696 forms a barrier on the northeast. The entire east face can be seen from the valley and current conditions can be observed from below. Snow usually remains on the east face well into mid-summer and an ice ax will be needed. Later in the season, it will be a climb up steep talus and boulders.

In 1898, Buck Mountain was climbed ten days after the first ascent of the Grand Teton. The first ascent of Buck Mountain was made by T.M. Bannon and his recorder, George A. Buck, whom the mountain is named after. A large cairn was built on the summit as a triangulation point and was known as "Buck Station". The mountain has also been known as "Alpenglow Peak" because of its appearance when viewed from the northeast, particulary from the vicinity of Jenny Lake in the evening. It is the highest peak south of Garnet Canyon and the view from the summit is much different than that of the main Teton peaks. The east face is usually approached from Stewart Draw starting from Death Canyon trailhead. This is also the standard descent route on the mountain. 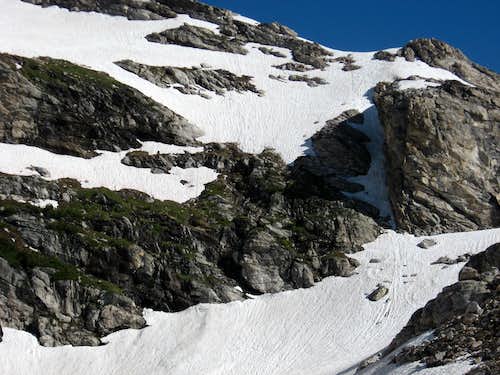 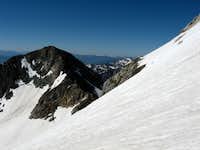 From Death Canyon trailhead follow the trail for about 0.75 mile until just before the third footbridge on the trail. There is a trail branching off to the right. Take this climber's trail which is in very good condition. There will be other smaller trails that branch off from the main trail but just keep following the obvious path. The trail enters Stewart Draw which is lined with cliffs and buttresses on each side. The route will eventually enter a huge scenic meadow with large erratic boulders. 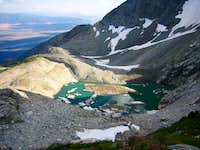 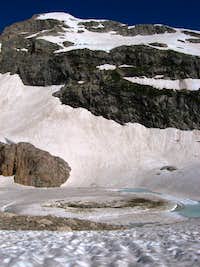 Timberline Lake and the East Face

There are some nice campsites here. The trail then climbs steeply above the north side of the creek up the long headwall to Timberline Lake. The boulderfield is steep and longer than it looks. Once above this, you will get your first view of the east face of Buck Mountain. The lake’s location is in the large bowl on the southeast side of Buck Mountain. If you lose the trail then just head toward the right side of the lake. The color of the lake is glacier green. You won't be able to see it until you are right above it. Static Peak is the mountain located directly south and Peak 10,696 is located to the northeast of the lake.

Above Timberline Lake traverse northwest right toward the narrow chute that is located between the east face cliff band and the east ridge. It will be obvious the closer you get to it. There is a climbers trail that goes through this section. From the top of the chute climb up and traverse left toward the summit. This mostly involves steep boulder hopping and scree. In early season, snowfields will have to be crossed. Extra caution should be used here because there is a huge cliff below.

The actual summit is located on the northern side of the ridgeline. The summit view of the major Teton Peaks to the north is quite unique. You can also see many peaks in the southern half of the park. Most notable to me was seeing Rimrock Lake on the north side of Prospectors Mountain. It is a hanging lake surrounded by cliffs on each side. It is seldom seen because it is located over 1,000 above the floor of Death Canyon. The other prominent peak in view is the west summit of Buck Mountain. Farther behind to the west is Alaska Basin and Idaho.

Elevation Gain is 5,200 feet and hiking distance is 12 miles round trip.

Bring regular day hiking essentials including cold weather gear. Bring enough food and water for a long day. There is water available from the creek draining from Timberline Lake so you won't need to carry as much water if you had a filter. A good pair of hiking boots should be enough in summer. In early season, bring mountaineering boots, ice ax, and crampons.