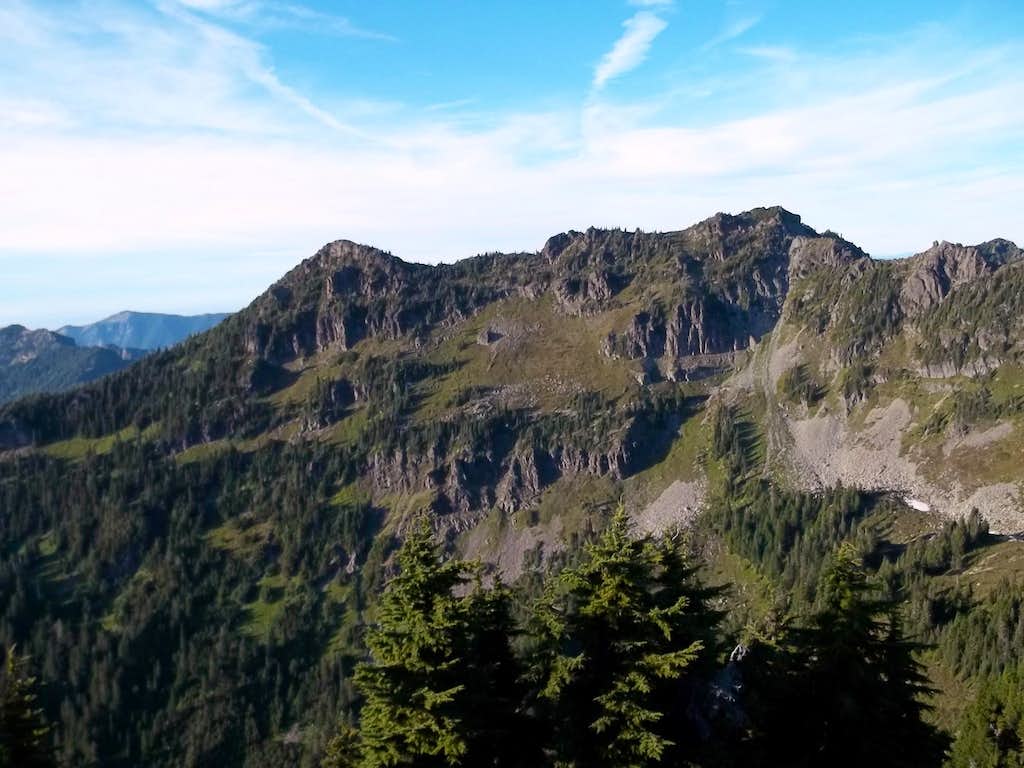 East Fay Peak is the higher peak on the right. Fay Peak is the lower peak on the left.
East Faye Peak located in the Mowich Lake region of Mount Rainier National Park is an unofficially named peak that connects with Faye Peak and Mother Mountain. Though Faye Peak is the more well known summit East Faye Peak is slightly taller making it the official peak on the ridge. The ridge itself is very rugged in nature though the true summit of East Fay Peak is actually well rounded on top and easy for several people to enjoy the summit. The approach to the summit is via the Fay-East Traverse boot-path that is scrambly and Class 2 in place. Because this area is rugged in places, it is critical to stay on the bootpath throughout the entire traverse. The boot-path also has some slightly airy sections so use caution on these sections.

Like many of the other summits in the region is peak is home to excellent views in all directions. On a clear day one can see all the way to Mount Stuart and Mount Baker to the north. Mother Mountain and Mount Rainier look especially amazing from the summit. Views are all along the Fay-East Traverse but in my opinion the true summit of East Faye Peak has the best views. This would not be a hike I would want to do on a rainy day and I would avoid coming up here if there is fresh snow.
.

VIA THE MOWICH LAKE AND TOLMIE PEAK TRAILHEAD (RECOMMENDED IN SUMMER. KEEP IN MIND THAT THE MOWICH LAKE ROAD IS CLOSED USUALLY TO AT LEAST MAY AND MANY TIMES MUCH LATER!!!!): Take Route 165 South. It will soon intersect with Route 162. Continue on Route 165 south through the towns of Wilkeson and Carbonado. You then go over an older bridge over the Carbon River. This bridge is beginning to look unsteady and would not be a good place to be during an earthquake. Roughly a half mile over the bridge you will run into an intersection with one road veering right and head up Mowich Lake Road. You want to head up 17 miles up the road. You will run into the self pay area up at the Paul Peak Trailhead about 11 miles up the road. Don't forget to stop here because there are plenty of rangers at the Lake Mowich Campground and they will ticket you if you don't pay. 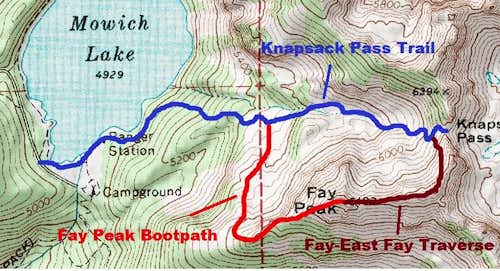 The approach to the summit is via the Fay-East Traverse boot-path that is rugged and Class 2 in place. Because this area is rugged in places, it is critical to stay on the bootpath throughout the entire traverse. The boot-path also has some slightly airy sections, so use caution on these sections. Most head up from via the Fay Peak Bootpath because it is much easier to spot than the path up from near Knapsack Pass. The total elevation gain is only 1700 feet. That being said, it will feel like more due to the combination of ruggedness and the views. 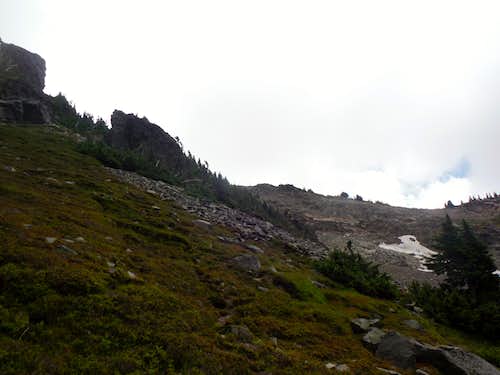 The bootpath from Knapsack Pass

This hike falls within the Mount Rainier boundary so a Mount Rainier National Park pass is required. If you don't have a Golden Eagle Year Pass then you will have run into the self pay area up at the Paul Peak Trailhead to pick up your parking pass or run into the Carbon River Ranger Station to pick up one as well.

East Fay Peak from the summit of Fay Peak
Summer and early fall are the best times to climb this peak because that is when the road is open. Though I have gone up to Fay Peak with snow on it in fall I would not do the East Fay Traverse with any snow on it. This traverse is rugged and exposed in spots with potential hazards along the ridge.

There is a camping area right by Mowich Lake. This camping area is usually very busy, especially on the weekend. There is no fee for the camping area but a wilderness form must be filled out. .