The long east ridge "traverse" from the village of Dovje to the south-east of Kepa / Mittagskogel is one of the most scenic routes to the mountain. While the first part of the route - the climb to the ridge - is hidden under trees, the main part runs along the south slopes of the various summits of the Kepa / Mittagskogel Massif. Though it is the least difficult of the currently posted routes it is far from easy. There are two protected sections, on into and out of a deep notch on the ridge, the other on a ledge beneath Mala Dovska Kepa / Lengenfelder Mittagskogel, which are both rather exposed. Between Mala Dovska Kepa and Kepa there is a long unprotected traverse on steep scree covered slopes. A bit nightmarish since there are no holds and no places to place any protection.

In all, the east ridge traverse is a worthwhile climb: good views and some adventure in the more difficult sections.

Dovje is located in the Sava Valley on the Slovenian side of the Karavanke / Karawanken ridge. You can reach it as follows:

From Austria
Take motorway A11 through the Karawanken Tunnel to Slovenia. At the first Slovenian exit (Hrusica) turn onto 637 west, direction Kranjska Gora. After a few kilometres you'll reach the exit to the village Dovje (north of the road). Drive into and through the village and follow a mountain road for some 5km (above the village you must deter left). It ends in a river bed (Mlinca River), where there is a small parking lot.

From Slovenia
Take A2 to the exit Hrusica. Turn onto 637, direction Kranjska Gora and after a few km turn right to Dovje. Drive through and turn on the mountain road, which will take you in long switchbacks to the trailhead near the Mlinca River. 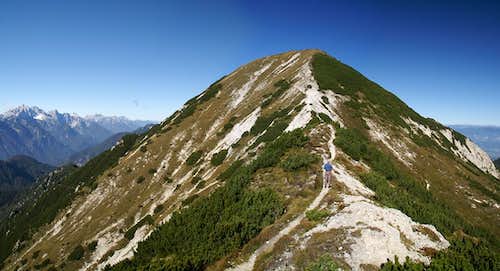