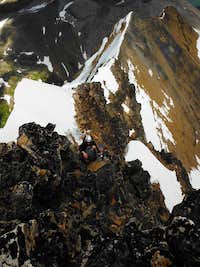 Somehow Mount Edith Cavell’s East Ridge got a grade III classification in the “book of lies” (the local’s affectionate name for the Selected Alpine Climbs guide book covering the Canadian Rockies). However, we ascended the East Ridge to the summit of Mount Edith Cavell in five hours from the car. We then descended it in three hours back to the col/bivy. It only took us one hour to reach the col/bivy on ascent from the car. This was a somewhat unconventional (leaving the parking lot at 1:PM) ascent by three veteran climbers who got shut down on our original objective lower down the Columbia Icefield Parkway by an aggressive bear trail closing.

Thinking quickly, we saved the drive up to Jasper by making an afternoon ascent of Mount Edith Cavell. We soloed the ascent and made one rap on descent, but I would have been quite comfortable down climbing that rap section myself. The quartzite on the east ridge of Mount Edith Cavell will afford you some of the best quality rock you will ever encounter on an 11’000'er climb in the Canadian Rockies. In fact I will go out on a limb and say it is the best of the entire group, out of some 54 peaks. And I never felt the climbing was more difficult than the stated grade of 5.3. 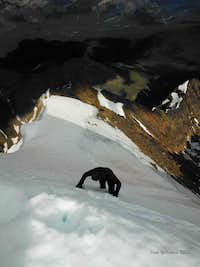 Crux of the day

The East Ridge is yet another Conrad Kain route established in 1924 along with a man named Hickson. It has earned a reputation as a classic objective in the Canadian Rockies if for nothing else than its ease of access (a trailhead starts at the moraine!) and before-mentioned superior quality of rock.

There is a paved road all the way to the trailhead. Seven kilometers south of Jasper head west on 93A. Another 5kms brings you to the Edith Cavell road. Turn right up the newly paved (2011) narrow road and 14kms later you will be staring at the broad north face of Mount Edith Cavell. Few 11,000’ers in the Canadian Rockies provide such easy and quick access. If you want to get an early morning start, you can sleep in your vehicle at the trailhead or head up to the col at the base of the East Ridge via a very comfortable and scenic bivy with water (one more step above the col-better bivy sites closer to the water). If quite fit, the col can be made in one hour, two if average. The first half of the hike is via a well-established tourist trail heading out of the left upper end of the parking lot (Cavell Meadows). Leave the trail when you are able to drop down into the lower moraine and head straight for the snow covered (August) slope below the col. Ascend the left side of this slope via a faint scree trail.

The East Ridge is relatively straight forward; however there are several gullies to negotiate via route finding. Start out right of the first drainage up easy scree covered steps. Eventually you make approximately two leftward crossings of braided gullies above. Stay on ribs that look well-traveled avoiding the darker moss covered rock when possible. As you top out on the first section of the East Ridge, the part you could see from the col, cut across left on a faint scree trail below a bump in the ridge to save a little elevation loss. Once you get to the other side of this bump, the upper, steeper, darker and wetter half of the East Ridge will come into view. There are several 5th class spots to climb, but only one sustained pitch of 5th class. This pitch is quite obvious. The rock is solid by Canadian Rockies standards and options many in terms of navigating your way up this section.

The real crux of the East Ridge in early August was the crossing of snow/ice patches on the upper ridge proper. We did this climb as an afternoon ascent in early August and could boot across all of them fairly easily with an alpine ax. We never donned crampons except for the final cornice bulge that needed to be ascended to the broad summit ridge. In late afternoon, this snow can be in precarious shape, with the potential to slough off of the ice, which could be catastrophic for anyone causing such a slough. Being able to dig crampons in gives one a bit of security in surmounting this last obstacle that leads immediately to the very broad summit with beautiful sharp cornices and views abound.

You can go down the much easier (but longer) West Ridge or return the East Ridge. We returned the East Ridge and made one rappel with existing tat at the full pitch of 5th class climbing. However, I was quite comfortable down climbing this section myself as well. If soloing and descending the East Ridge alone, I would not haul a rope. It took us three hours to descend to the col and less than one hour to return to the parking area.

This is a popular route, I advise a helmet for that reason if no other. If experienced and comfortable, this is a solid ridge to solo, for ascent and descent. Otherwise, one 60m rope should suffice. You will have to down climb a few meters with one 60m rope if only making one rap at the full 5th class pitch. Crampons and an alpine ax are a must as you cannot tell the condition of the snow/ice crossings, particularly the last one. It would be a shame to make it that far to bail because you did not have crampons. A fall on this last bit could easily be fatal. I preferred a light but hard soled boot versus approach shoes. Last running water might be just above the col. Poles are helpful to the col, best left there if not doing the full traverse.

100’s of Canadian Rockies multi-pitch rock climbs, ice climbs, alpine climbs and scrambles, first hand beta, personally completed and written by me as a professional climber……just scroll down to routes